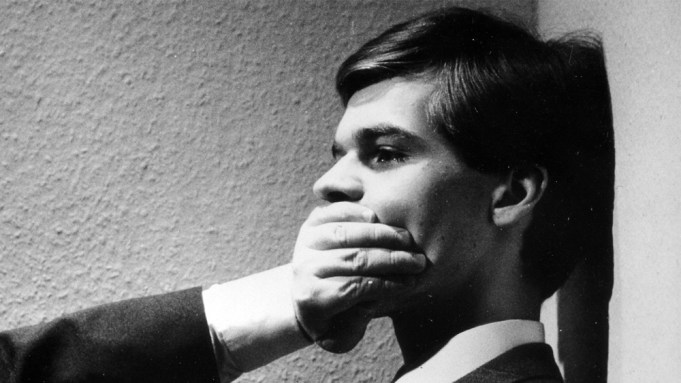 Kafka wrote his first novel, the unfinished Amerika, without ever visiting the country. Drawing instead on accounts from his relatives and other émigrés from the Jewish, German-speaking milieu of Prague, he captured the push-and-pull of emigration and immigration with a fabulist’s clarity. This kind of unfamiliar take on the so-called “new world” is the subject of the ambitious film series “Another Country: Outsider Visions of America,” on view through August 14 at Lincoln Center. The series features more than thirty works set in the US and made by foreign filmmakers, like Jean-Marie Straub and Danièle Huillet’s adaptation of Amerika titled Class Relations (1984), which replicates Kafka’s uncanny effect by being shot almost entirely in Hamburg.

Most of these films—a refreshing mix of commercial fare, arthouse films, and video art—reveal more about the desires and anxieties of their authors than about the political and historical reality of the United States. Like Kafka, some of these filmmakers never visited at all; others became American citizens, or worked between countries. It’s never clear how, exactly, the programmers define “outsiders”; surely there’s a difference between France’s Straub and Huillet, who made their films outside the US, and Jonas Mekas, who began making films only after immigrating from Lithuania. This range of familiarity can be seen in the films, which often teeter between transplanting American themes onto different terrain, assimilating to American cinematic expectations, or inhabiting some liminal space between. The many films that, like Class Relations, are shot in visibly foreign locations offer some of the most striking reappraisals of America, isolating political and cultural characteristics from recognizable settings. Take Sergio Corbucci’s anti-authoritarian Western, The Great Silence (1968), filmed in the Italian Dolomites, or English-born Terence Davies’s House of Mirth (2000), a period-piece indictment of the Gilded Age framed by the manors of Scotland.

When these outsider visions are commissioned by domestic studios, however, they serve up to American movie-goers an only slightly less familiar image of themselves. Michelangelo Antonioni’s Zabriskie Point (1970) lingers on an endless array of billboards and cultural debris—Look magazine, a box of cereal—reflecting a fascinated European’s view of American pop commercialism. Dutch director Paul Verhoeven, on the other hand, has relished Hollywood’s gaudy camp throughout his American career. In his stripper picaresque Showgirls (1995), the easy inhabitation of hackneyed racial roles (non-white characters as saviors, sidekicks, and plot devices) and seamless use of special effects fortifies the artificiality of its Las Vegas setting.

If there’s a single takeaway from the series, it’s that there is no insider vision in a country defined by migration. The filmmakers Sylvia Chang and Chantal Akerman—Taiwanese and Belgian, respectively—both depict Americanization as an ongoing process, rather than as something static. Chang’s Xiao Yu (1995), set on the border between New York’s Little Italy and Chinatown, uses a green-card marriage as a symbol for America’s ad hoc identity. (“What the hell is natural about this country?” asks the groom, a doggedly rumpled Italian-American, when talking about the now-defunct Immigration and Naturalization Service. “It’s like talking about high-fructose corn syrup as a natural ingredient.”) No claim to Americanness is granted firm footing; when cultural conflict arises, it’s in the form of dueling radios, one tuned to an operatic aria, the other to a Mandopop station. Instead of music piping in from a different frequency, letters from Belgium act as the counterpoint in Akerman’s News from Home (1977). The artist reads correspondence from her mother over elegiacally choreographed street scenes of Lower Manhattan, where Akerman was then living. In the geographic disconnect between the visual and the audial, the near and the far, there’s the perpetual sense of an elsewhere, an absence made present. Edward Said described this phenomenon as the “double perspective” of the exile, who “sees things both in terms of what has been left behind and what is actual here and now.”

Another Country’sastute inclusion of Hong Kong action director John Woo represents both the promise and the fragility of film production in the age of globalized studios. Tapped to direct Face/Off (1997), the sci-fi thriller in which Castor Troy (Nicolas Cage) and Sean Archer (John Travolta) surgically exchange faces, Woo imbued the blockbuster format with a madcap energy and a disregard for the limits of credulity. Face/Offfeels at once familiar in its use of high-octane stunts, and alien in its hyper-stylized overacting. Woo hasn’t made an American film since 2003, when he left Hollywood to create Chinese historical epics. Multinational productions have become no more difficult than the shifting of resources, yet many national film industries remain culturally bounded.

As audiences become increasingly global, one fear is that the only common cinematic tradition remaining will be the one that is most insular and self-referential, more concerned with ubiquitous branding—the Marvel Universe, the Disney remake industry—than cultural specificity. One shouldn’t forget, however, that Hollywood was always global, established almost entirely by émigrés in the 1930s and 1940s: studio heads like the Warner brothers from Poland, a litany of popular German directors like Fritz Lang and Douglas Sirk. The genius of these filmmakers was that they showed “American society just as it wanted to see itself,” as André Bazin wrote in a 1957 issue of Cahiers du Cinema, “by participating with the means at [their] disposal in the building of that society.” Part of that was due to economic and political necessity; deeply impoverished and banished from their home countries, they had to work within established genres, all the while inventing what we now consider quintessential American emblems, whether the noir or the Western. More revealing than any one film in the series is its historical range, from the 1970s to the 2000s, examining the legacy of the often immigrant-defined tropes of American cinema, which has always been collaborative and international, despite its status as a US export.

Media Pop-ups in the Hamptons