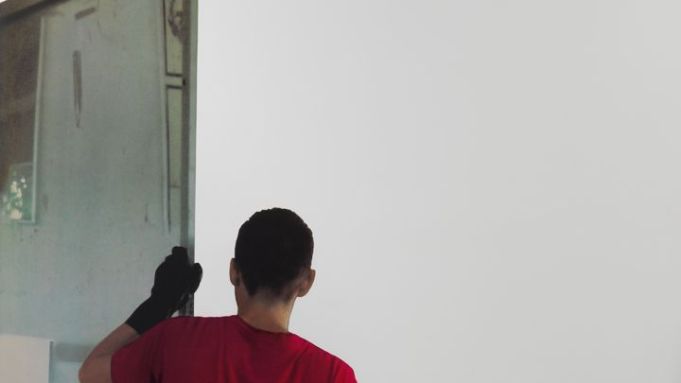 “Arte Povera is the base of all the work that I do,” says Michelangelo Pistoletto, which may surprise some admirers of his highly varied works. “We didn’t want to just produce objects: we wanted to produce change.” A new exhibition of Pistoletto’s “Mirror Paintings,” on view at Luhring Augustine in New York [through Apr. 28], shows the 78-year-old artist continuing his eternal quest to find meaning within a mirrored reality of contemporary society.

Pistoletto’s contribution to Arte Povera was most cogently established in his reformulation of the mirror as a new canvas. His investigation carries on in this new series of 14 large, square works that depict—via dense, colorful photographic images adhered to mirrored surfaces—the tools (from piles of gravel to dangling I-beams) and personnel integral to building construction. The show’s title, “Lavoro” (artist’s translation: work), reaffirms the artist’s ongoing interest in labor and production, from its semiotic underpinnings to its social allegiances and artifacts.

Pistoletto began making his mirror paintings in 1961. In those first works, including the well-known Man with the Yellow Pants (1962–64), the artist painted on tissue, which was affixed to steel mounted on canvas. After 1971, Pistoletto switched from painting to photography, applying silkscreened images to mirror-finished stainless steel. The mirrors create an effect of instant complicity with the viewer—the work does not exist externally from the viewer’s own image within it. “I use the mirror as a tool of expression,” says Pistoletto. “Mirrors bring the people into the image, and that is very meaningful to the work.”

His last show of mirror paintings at Luhring Augustine, in 2008, featured images of prostitutes, in poses that seem intentionally banal. In Prost N.1 (2008), a woman wearing a black top and panties is depicted speaking on the phone, her face obscured by the device. The reflected viewer is asked to commune with the woman, and with her profession. We might retrospectively read her image, and our presence in it, through the theme of work.

Pistoletto’s more recent body of mirror paintings reflects his day-to-day circumstances: the restoration of the building at his foundation, Cittadellarte Fondazione Pistoletto, in Biella, Italy. The foundation, which aims to “take artistic interventions into every sector of civil society, to contribute responsibly and profitably to address the profound changes of our age,” was in need of a facelift. During the restoration, says Pistoletto, “It became very quotidian and familiar to be around workers and machinery, so I introduced these images into my mirror paintings.”

The artist views his images as both an illustration of larger theoretical motifs and personal reflections. “The moment you fix an image with a photograph, it becomes a memory that is fixed in time,” says Pistoletto. “These images are also a document of certain moments of my life.”

A standout work, Lavoro—Betoniera (2008–11), features a detail of a rusty teal green machine. The structure dominates the frame. Reflected in the background, the viewer becomes, more or less, a witness to the magnitude of the machine. “The machines and construction materials are the protagonists in the paintings. The machines make the work more abstract—they become less human and more sculptural,” says Pistoletto.

The mirror is not only a device for reflection, but also a call to arms for the viewer to accept the responsibility of his or her position. “Artists in the 20th century gained the maximum of autonomy and subjectivity in their expression,” says Pistoletto, reflecting on the beginning of his career. “I came to the mirror to try to transmit the idea that each viewer can have the same autonomous responsibility as the artist. People should, individually, be more similar to artists, and take a little bit more responsibility for their own freedom.”