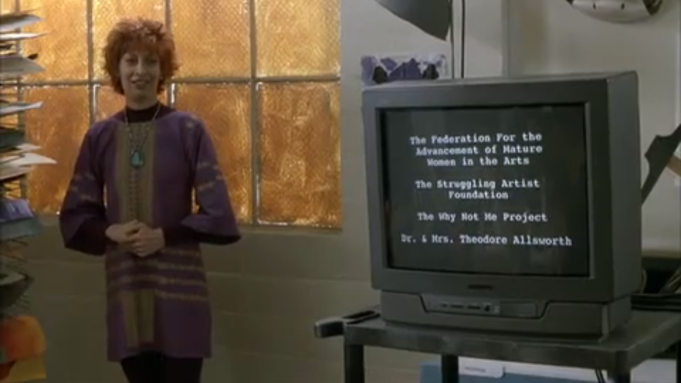 A woman in a flowery dress takes the stage and tells us about Ed Halter, who is presenting at Anthology Film Archives as part of the fourth Migrating Forms festival of moving images. He’s a critic, curator, runs the Light Industry, a venue for art film in Brooklyn.

The first film is the earliest instance of experimental animation Halter could find: Ernest Pintoff’s 1963 short, The Critic. Innocuous, abstract images float across the screen. Mel Brooks’s voiceover begins: “What the hell is this? What the hell is it? I know what it is. It’s garbage. I think it’s symbolic of junk.”

Halter plays a clip from Monty Python’s Flying Circus: a blonde and a Frenchman in a trash dump smoke and flirt and small talk in a parody of the French new wave. The film disintegrates into a wild, jagged edit of violent images: men beating each other, a mushroom cloud—all of it absurd and funny. Halter plays a clip from “The Benny Hill Show,” another farce in which a French director shows an obnoxious mess of video collage. Halter plays a “Saturday Night Live” sketch, a darkly lit film in which an egg is cracked on a boot and a rooster crows. Mike Myers wears a turtleneck and French-style thin moustache and sneers. Halter explains that all these clips show, “the blurred line between experimental and foreign films,” as pop culture sees them.

A clip from Jon Lovitz’s animated show, “The Critic.” A clip from “The Simpsons.” A clip from the film Ghost World. The characters say phrases like “I’m so alone.” The films end dramatically, often with the words “fin.” “It’s all the same joke,” Halter says. “These films all have the markers of being an experimental film.” They are shot in black and white. They use canted angles, severe lighting, disjointed cuts, morbidity, violence. They’re campy. Their soundtrack is classical music or atonal dissonance. They often seem foreign or homemade. There’s always a snobby critic in a beret, smoking, wearing sunglasses at inappropriate times, over-analyzing the film. The general sense, as Halter puts it, is that the “avant-garde is something meaningless and also overly obvious in its meaning.”

Then the tone changes. Halter plays the famous white bag clip from American Beauty, in which a teenage boy has filmed the “most beautiful thing [he’s] ever seen.” “The bag was just dancing with me,” the boy says, “for 15 minutes.” “We’re supposed to think this character is special and sensitive because he makes an experimental film,” Halter explains.

He plays a clip from The Ring, a horror movie about an experimental video that kills people. The clip looks like the fake films we’ve already seen, but it’s somehow frightening. Halter tells us that “not knowing the meaning” is where the fear comes from, just as the overt meaningfulness was what made the other clips funny.

He plays a clip from Miranda July’s Me and You and Everyone We Know in which July’s character makes some video art. This one is unique because July is a real-life experimental filmmaker. But the film in the movie isn’t her experimental film, it’s her character’s, and Halter tells us she simplified the video art in her feature film to make it friendly to a wider audience. This film-within-a-film was created to affect people. So were those in The Ring and American Beauty. The viewer didn’t have to know the popular ideas about “experimental film” to get the joke. We only had to watch to know that what we were watching was different from the mainstream. This difference, Halter says, is why all this horror, comedy and anxiety came to be.