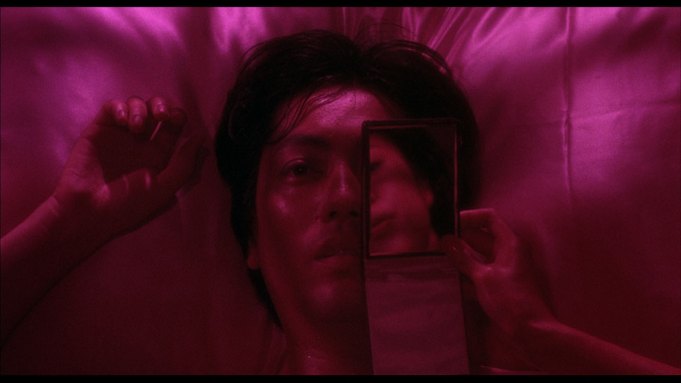 Paul Schrader’s First Reformed, which follows an alcoholic priest at odds with his small country parish, was released last month and is currently running in theaters. In an essay for our website, Malcolm Thorndike Nicholson wrote about the movie as well as a new re-issue of Transcendental Style in Film (1972), a focused study of Yasujiro Ozu, Robert Bresson, and Carl Theodor Dreyer that Schrader published when he was just twenty-four years old.

Here we look back in A.i.A’s archives to our January 1986 issue, in which Gary Indiana reviewed Mishima: A Life in Four Chapters (1986), Schrader’s semi-fictional biopic about the Japanese novelist (who famously killed himself after orchestrating a failed coup d’état). Indiana did not like the film, criticizing Schrader for focusing disproportionately on Mishima’s public life, and blindly accepting the writer’s macho self-mythology. “Reducing the man to the creature of his own publicity leaves Schrader with a pretty unsavory hero,” Indiana writes, “a boorish right-wing crackpot whose unquenchable narcissism demands progressively grander manifestations.”

Interestingly, he notes a tension between the meditative, Ozu-like aesthetics and a coercive, thriller-like plotting in the film; Nicholson observes similar elements in First Reformed. We present Indiana’s essay in full below. —Eds.

Paul Schrader’s Mishima is about Yukio Mishima in somewhat the same way that Fassbinder’s final film is about Jean Genet’s novel Querelle—a meditation on a piece of fiction. In Schrader’s case, fictions: not only the excerpts from the three Mishima novels dramatized in the film, but Mishima’s life story as well. What we see of Mishima’s progress from childhood to hara-kiri is drawn almost entirely from the mythology Mishima spun around himself; he was a tireless self-promoter. After years of flogging the bizarre idea that Japan’s lost glory would revive with a return to emperor-worship and the samurai code, Mishima formed his own army. Powerful connections in the military gave Mishima’s Tatenokai, or Shield Society, access to training facilities at Eastern Army Headquarters, where in November 1970 Mishima and several comrades paid a call on General Mashita, tied him to a chair, and demanded that the garrison’s troops assemble in front of the building and listen to a speech. Mishima’s harangue, intended to spark a coup d’état, instead provoked catcalls. Mishima withdrew from Mashita’s balcony. Back in the office, he disemboweled himself in the classical seppuku manner, but his second, a young man named Morita (who was Mishima’s lover), flubbed the decapitation on first try, and failed to completely sever Mishima’s head on the second. Finally, Furu-Koga, a fellow cadet with better kendo training, took the sword and did the honors. Morita then made a fainthearted attempt at hara-kiri himself, but couldn’t quite cut it; Furu-Koga was obliged to lop his head off as well.

In the time of the samurai, Mishima’s death might have been a supreme assertion of honor; in 1970 it was correctly perceived as a grotesque publicity stunt. In light of Schrader’s film, it might almost qualify, like the death of Elvis Presley, as a good career move. The moment Mishima plunges the dagger into his abdomen, three other moments of death (hanging threads from the three fictional set pieces viewed earlier) flash on screen, woven—or, rather, hammered—together by Philip Glass’s generically “Oriental” score. Then we see a blistering orange sun on the rise (or the wane) bubbling away on a near horizon. End of movie. The fact that we don’t see the desperate, bumbling mayhem that followed Mishima’s hara-kiri is consistent with Schrader’s hagiographic intentions. The film has no time for the lesser foibles and banalities that comprise most of any lifetime, and no taste for the messy particulars a life like Mishima’s leaves in its wake.

Indeed, Schrader demolishes anything resembling real time, creating a continuum of past, present and fictional present-perfect, each mode delineated by a distinct, elegant cinematographic style. Mishima flashes forward and back between color docudrama, black-and-white “past,” color fiction. The “past,” usually framed at low angle (the “pillow shot” favored by Ozu), is oneiric, its scenes full of visceral subtleties (Mishima’s grandmother’s legs under blankets; the slicing of fingertips in a blood-oath sequence), the camera generally static. The “present,” alternately crisp and grainy, is characterized by a peripatetic camera that emphasizes the conceit of “action” as Mishima’s ultimate art form: he puts on his uniform, leaves his farewell manuscript out for the publisher, gets in the car with his accomplices; from then on, this thread of the narrative is all motion and propulsive military music on the order of a drum roll before an execution.

The fictive dimension was shot on a sound stage on wonderfully artificial sets designed by Eiko Ishioka—on whom the legacy of Leni Riefenstahl has not been wasted. The camera dips down into these sets from a towering vantage point, recalling courtesan prints and Mizoguchi movies. Eiko’s sets are operatic masterpieces, monumental and more than slightly vulgar, but appropriate to the material. They frequently split apart or collapse with terrific drama; movement inside them is orchestrated in splashy patterns. The lurid colors of the “Kyoko’s House” sequence are particularly effective in conveying the look of ’50s Cinemascope gangster films like Nicholas Ray’s Party Girl. Despite its hallucinatory vividness and extreme spatial closure, the thea­trical excerpts from Mishima’s novels achieve the peculiar effect of “opening out” the adjacent passages; while the present-perfect is saturated with the stuff of Mishima’s obsessions, it’s also the tense least obliged to sound true.

These studio sections are, on the whole, more dramatically energized than the black-and-white “reality” that brackets them, in which Mishima evolves from a sheltered, sickly child into a withdrawn, bookish adolescent, and finally into a protean lout who churns out prizewinning books, hangs around gymnasiums, patronizes student leftists, and issues fatuities to an ever-avid press corps. Mishima‘s biopic aspects are quite punchy, but coercive in the manner of heavily stylized propaganda. No one has ever been so purely a product of personal obsessions as the Mishima of Mishima; reducing the man to the creature of his own publicity leaves Schrader with a pretty unsavory hero, a boorish right-wing crackpot whose unquenchable narcissism demands progressively grander manifestations (posing for photos as St. Sebastian, directing himself in films about ritual suicide, etc.)—pathological symptoms which Schrader accepts as talismans of spiritual truth.

One is more convinced by Mishima’s art than by Mishima’s life, however, and Schrader uses the novels as psychological stuffing for this publicity ectoplasm. The protagonist in each fictional episode is a troubled young man. In “Temple of the Golden Pavilion,” it’s a temple acolyte who stutters; oppressed by the perfect beauty of the Golden Pavilion, he finds salvation by destroying it when, at war’s end, American bombers have failed to do so. In “Kyoko’s House,” it’s an actor who takes up body-building, then meets an older woman who turns him on to heavy s&m, whereupon he realizes that art is a pale substitute for bondage, discipline, and death. “Runaway Horses” features a young kendo master, dissatisfied with the spiritual joys of martial arts training; driven by a need for purgative action, he assassinates a politician, then disembowels himself.

From these attractively fleshed, slightly nauseating passages, it’s all too easy to extract the same messages: hatred of one’s own physicality, desire for nobility through “action,” inability of art to provide a sufficiently heroic raison d’être. The inductive leap to the psyche of Yukio Mishima presents no big difficulty, either. As if to prove that Mishima’s life was really all about the stuff we see in the fictions, Mishima’s own reflections on himself accompany the “past” in voice-over. But for many viewers, the smooth transitions from art to life will register as far too facile.

Mishima‘s concentration on the public Mishima leaves the viewer in considerable confusion (especially since even well-publicized aspects of his life have been suppressed, allegedly to placate his widow; still, the film was banned in Japan). In the opening scene, for example, we learn that Mishima is married, has children; we never hear another thing about them. A flashback in which Mishima dances with another man in a gay bar is the only explicit reference to Mishima’s homosexuality. Mishima writes, gives press conferences, trains with his army; we never see him at ease, in what press photographers like to call an “unguarded moment.” His biographers describe an often congenial, pleasure-loving man, but Schrader’s Mishima is a stodgy, uncomfortable person who lacks any sort of spontaneity, a compulsive striker of attitudes who seems, at all times, to have frozen into the demeanor of one of his publicity photographs. He is so much his own cliché that one finally wishes Schrader had gone all the way and cast Jerry Lewis.

Avoiding any critical probing into the private Mishima, Mishima wraps a consistent, unsatisfying myth in flattering visual tissue. Schrader accepts the sword-and-sun hyperbole of Mishima’s writing at face value, substituting its grandiose contradictions for the more prosaic ones that influenced Mishima’s behavior. The film relentlessly searches for a metaphysical essence of Mishima; what it invariably finds is a perfect vehicle for Schrader’s own obsession with rituals of male violence. Mishima’s life, in this heavily colored version, confirms a hard, knotty “truth” that Schrader has already tried to pin on blue-collar workers, fancy call boys, porn stars, and taxi drivers: Purity is won only in murderous catharsis. Since masculinity is defined by the ritual of bloodletting, art can serve only as meager simulation, a shadow of the real thing. Mishima’s suicide was supposed to fuse art and action in a moment of terrible beauty; in actual fact, the event was an absurd mess. Mishima set himself up to die of embarrassment, his insatiable lust for fame having finally consumed every other possibility. Mishima enshrines this tacky passion without a whisper of irony.

It can be argued, however, that while Schrader’s hermetic sobriety in representing Mishima fails to debunk or aerate any myths, it does offer those myths without amelioration or special pleading, and lets us see them with optimum clarity, in the full sensual glory that is, unfortunately, truly theirs. Mishima was hardly alone in his necrophilic absolutism and his conflation of manhood with an attraction to weapons, injury, and self-destruction. For the like-minded, Mishima is loaded with genuine Ur-substance, but opposing sensibilities are free to view this film as a richly articulated fabric of appalling ideas.