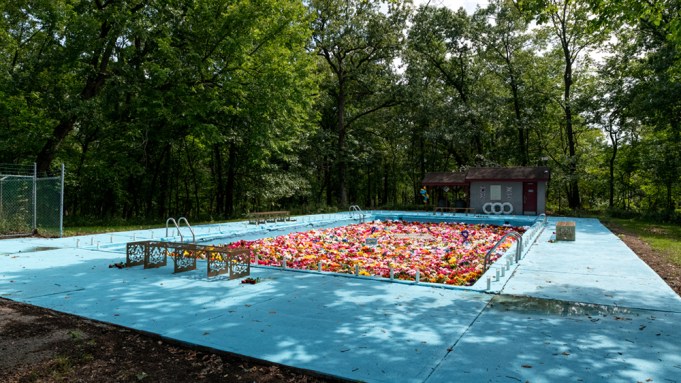 The Kansas City metropolitan area is undergoing a period of renewal. A years-long building boom is transforming the downtown skyline. Significant growth in tech jobs, reasonably affordable housing stock, and successful homegrown start-ups are proving the city is a desired market. Not everyone, however, is benefiting from this boom. Open Spaces, a new biennial of public art and performance that runs through October 28, offers opportunities to reflect on this condition through site-specific installations that address decay, gentrification, and civic pride. Open Spaces features new work by more than forty visual artists from the region and across the globe; nearly two hundred more are in the Expanded Field, as the parallel program of exhibitions is called. The event’s hub is the 1,800-acre Swope Park, but works can be seen at locations throughout the city on both sides of the Kansas–Missouri state line.

A short distance from the pool is local artist Shawn Bitters’s Burn Out, a large-scale installation that follows a hiking trail through the woods. Bitters has embedded twenty-three aluminum panels duplicating the profiles of stones, ranging in size from twenty-four to fifty inches in height, he found along the mile-long trail. The abstract ink paintings on them communicate a coded message that can only be deciphered by completing the trail and consulting Bitters’s page in the Open Spaces smartphone app. There are long stretches where none of the work is visible as you walk, making the next discovery all the more exciting. Seeking out these “stones,” one strikes a balance between engaging the artwork and appreciating the natural environment.

In a former lakeside nature center at Swope Park, Kansas City-based Jillian Youngbird has created For the Birds aka Swope Shelter, a tableau made from found and recycled materials, including cardboard, chicken feathers, and Christmas ornaments, as well as discarded plastic and dead sticks found around the building. Two life-size human figures with bird heads squat in an environment that will deteriorate over the course of Open Spaces due to humidity and other weather conditions. In an interview, Youngbird said that when she began working with the shelter, she found significant amounts of trash, indicating that whoever had been using it before her was not just passing through. The shelter is kept locked per parks department regulations, which means visitors view Youngbird’s work through the windows, enhancing the feelings of voyeurism and hopelessness that attend her work.

Jill Downen, another Kansas City artist, speaks to the rapid gentrification of the city. Her Architectural Folly from a Future Place is a pair of pristine white concrete slabs with lapis lazuli details. They appear as ruins of some grand historical structure on a path toward a magnificent vista of the city. Downen’s beautiful sculpture makes a bold statement. Kansas City does not always build new residential and commercial spaces in the parts of the city that need them the most. Historical structures are actively preserved downtown. One can drive block after block in parts of the city where neighborhoods have existed for generations and see beautiful buildings that stand ignored or abandoned. I saw Folly as a remark on the importance of historical architecture in Kansas City, with an eye to racial discrimination in selecting locations and buildings for revitalization.

Free Fall is a ruin-like installation in Swope Park by New Orleans-based Dawn DeDeaux. Its forty-eight concrete columns bear the text of John Milton’s Paradise Lost, an epic poem retelling the fall of Adam and Eve, in reflective vinyl that glints at night with the illumination of the Starlight Theatre across the street. Among a field of walnut trees, the columns lean in clusters, some tilting toward each other and some bowing toward the ground. From a distance, the columns look like Roman numerals, as if conveying the futility of marking time when one has no control over its passing.

A densely symbolist multi-channel video, Chicago-based Nick Cave’s Hy-Dyve reactivates Hope Center, a decommissioned church now used as a community social space for children and families. As a “soul center” for the neighborhood, the church offers a multitude of programs as part of its mission to develop a healthy community on Kansas City’s East Side. Cave’s choice of this location highlights neighborhood issues addressing neglect by the local arts community. A large number of historic buildings in this part of the city have not received the same investment from private developers and investors as neighborhoods with higher white populations.

Inside, wraparound video of cascading imagery fully envelops the audience. Water ebbs and flows at viewers’ feet in projections on the floor. The walls bear a continuous, shifting pattern that includes the artist himself, peering through the mask of one of his signature “Soundsuits.” This shot is replaced by repeated images of the same figure, now in white tie and tails, then shifts again. A loud, percussive sound accompanies the imagery, making its effect both stimulating and disorienting. There are no pews in this former church, and without anything to hold onto, you experience a feeling of freefall. The cacophony of Hy-Dyve seems like a metaphor for the vigorous activity that goes into the necessary work of community service.

The Crossroads Art District, in contrast to the East Side, is one of Kansas City’s most quickly changing neighborhoods. Two adjacent unused storefronts there have been turned into cultural pop-ups for a pair of projects by New York-based artists. Ted Riederer’s Never Records is a traveling record shop that stocks only vinyl records cut by Riederer himself when musicians and amateurs visit the recording studio in the store. Tabs in the display racks list all the countries and cities where Riederer has set up his shop. Participating musicians can leave with their song on vinyl and in a digital file to use as they please, while Riederer adds a new record to his growing collection, ready to be heard in the next city where he sets up shop.

Shinique Smith’s installation Breathing Room is a space that immediately invites calm. A few dozen pillows are arranged on plain rugs, creating a relaxed atmosphere. They face a temporary wall made of discarded denim in varying shades of indigo. The fabric wall gives an impression of sky, enhancing the calm visitors feel when reclining on the pillows. Soothing scents, including verbena, linger. Strewn around the room are small denim balls to squeeze, hold, or pass around to others. Visitors are encouraged to give into the overwhelming desire to remove their shoes and meditate. Breathing Room offers both individual activities and a shared experience; you can drop in alone during regularly scheduled meditation demonstrations.

Smith and Riederer’s installations emphasize Kansas City’s historical reputation for friendliness. The two works offer very different activities, but both open their doors for strangers to come inside and explore common curiosities. Commercial environments driven by square footage and economics do not inspire the same need to interact as a neighbor’s small business does. One needs only to look a couple of blocks away to find the Power & Light District, a promenade for shopping, eating, and drinking where human interaction begins and ends at the cash register.

Open Spaces is good for Kansas City, and after years of casual discussion among artists and community leaders about the need for a citywide event, I am glad to see it finally take place. This event, perhaps unintentionally, has taken up a mantle of illuminating the social and cultural issues that are affecting Kansas City during its period of transition. I hope the next iteration of Open Spaces continues with this line of inquiry, involving a greater number of local and regional artists to take on these themes more consciously.