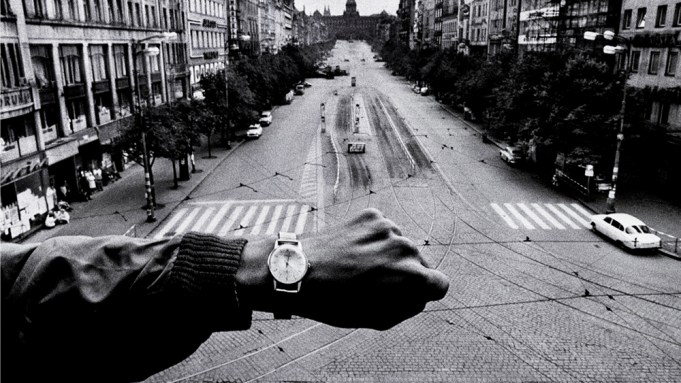 I’m interested in all nine of the classical muses, but the key figure for me is the grande dame who oversees the group. That’s the mother of the muses, the goddess of memory, Mnemosyne. Here we are, with these nine muses that correspond to tragedy, poetry, history, etc., and according to Greek mythology they’re all daughters of memory! My work’s always been centered on questions of memory, so when I first encountered that idea a decade ago, I was really blown away. I hadn’t realized there was a classical figure that was supposed to be my guardian angel. What interests me with Mnemosyne is that she’s an allegorical character who has given birth to different rhetorics of temporality (history, poetry, dance, etc.), each embodied by a different daughter managing different works—all of which fascinates me, whether in the work of writers, musicians or artists.

One of my favorite paintings is Lamentation over the Dead Christ (ca. 1480) by Mantegna. Looking at Christ lying on a slab, you can’t quite figure out, from the visual evidence, whether he’s already passed on or is in the throes of death. This weird, in-between space triggers an amazing contemplation of time and the passage from being to nonbeing. You can’t look at the image without thinking, “Wow, there lies a body that was once alive.” Every time I’m working on a piece, I have a copy of the Lamentation stuck in front of me, and just when I’m about to lose my nerve, I look at it. It pushes me on.

Another piece that I return to again and again as a marker and dramatization of temporality is a Josef Koudelka photograph of Prague in 1968. Koudelka shows his left hand and watch in the foreground of the shot, and in the background are the streets of Prague—totally empty. The scene really doesn’t mean very much until you realize the Soviets were just about to invade, and then the picture becomes about the spectral, unseen forces that shape any moment. There’s the spare, austere minimalism of it, which I love, and yet the shot still manages to retain an aura of the forthcoming event. It’s an image infused with ghosts.

James Joyce’s Ulysses also comes to mind. I would always start it but couldn’t finish it. I’d throw it away. But then six years ago I bought the audio book: you just have to listen to the reading of Molly Bloom’s soliloquy by the Irish actress Marcella Riordan. It’s amazing to hear the clusters and combinations of time that the soliloquy evokes. The way Riordan gets each register of time to have a different sonority and inflection is just remarkable. I return to that recording again and again to remind myself about one big lesson of the 20th century—that it’s really possible for things to be very fractured and multitemporal and still be very beautiful.

I made a film that’s actually called The Nine Muses (2010), and, to be honest, I’m surprised when anyone who isn’t black, sixty-five, and British makes anything of it. I wanted to complete this act of remembering for a unique and, to me, heroic generation, the generation of my parents. Many of them are gone now, the black people who started moving to Europe in large numbers in the mid-20th century and continued to come for three decades. Their particular take on migration, and how that reconfigured their sense of time and place, these are all issues that I had hinted at in other works. I wanted to address them specifically for once—even at the expense of alienating other people. I’d commandeered that generation’s lives, stories and events so often in order to speak about my own generation that it felt like a debt I had to pay. I knew other people would be put off by the film or would find it tough going to watch, but making it was just one of those ethical and moral imperatives. Once you commit to honoring the muse, the tragic muse or the historic muse or the lyric muse, you need to let her take you where she wants. I was led by the nose through the labyrinth of memory by these muses, and I allowed them to call the shots, even if the work became opaque.

I know the archival stuff is old and inscrutable, but my wish is to extend its afterlife, to have the embers burn a little bit longer. At the same time, the material always suggests something that you haven’t seen or heard before. That’s the quality I want those pieces to have. If they don’t, that’s cool, I made the fucking effort. I’m not concerned principally with whether all of the pieces translate. It’s not one of my obsessions. My worry is always to keep that nerve that I get from the Molly Bloom soliloquy or the Mantegna painting. You want your own work—like those pieces, which are so singular—to have a unique ontology, and sometimes you’re so pleased that the work’s acquired this status that it doesn’t quite strike you that it might alienate other people.

At the same time, I want people to embrace the difficulty. Look at Jean Rouch’s Jaguar (1967) or Mani Kaul’s Siddheshwari (1989). These films say: I know you’re an outsider to this shit, and I know not all of it is going to make sense, but do me a favor and just make an effort. We’re not talking Martians here, we’re talking other human beings. Make the slight push to get to the other side—you might not get there, but the attempt is the point. Just enjoy that, viewing or listening or watching a piece you’re not supposed to get, and follow in this rhetoric of temporality with me and see where it takes us. Hopefully there isn’t too much discomfort.