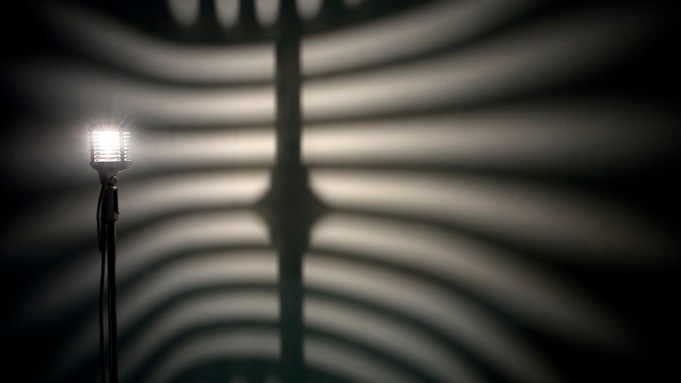 The 16 artists in the exhibition include Marco Fusinato, Carsten Nicolai, Susan Philipsz, Sergei Tcherepnin and Stephen Vitiello. All are born after 1964, and they hail from America or European or Asian nations.

Sound art has had only a limited presence in major American museums, London told A.i.A. in a phone interview, though the 2002 Whitney Biennial did include a section devoted to the medium—”if you can call it a medium,” she said.

“Part of the reason the show is taking place now,” London said, “is that the necessary equipment is much more easily available and cheaper. People can go far afield, like the Arctic or the desert. One of our artists recorded in Chernobyl. And back in the studio, using new software, artists can do very sophisticated editing.”

London also acknowledged that major institutions may have been slow to lavish attention on the medium. “Museums are very visual places. MoMA has been pushing the envelope with our performance series, but sound is often invasive, hard to control, fugitive.”

Sound art presents a challenge for the curator, she acknowledged: “I thought a lot about how I didn’t want it to look like an equipment trade show, with just rooms of speakers.”

“Instead I focused on the strength of sound, the materiality of sound, and sometimes the conceptualization of sound,” she said, adding that many works include a strong visual component.

As an example of the emphasis on materiality, London offered Microtonal Wall (2010), a piece by Tristan Perich that will be installed in the third-floor corridor leading toward the exhibition gallery.

“It consists of 1,500 tiny speakers that he’s tweaked and put a one-bit processor behind,” she said. “They’re laid out in a minimalist grid, and as visitors walk by, approach and move away, the sound changes and the composition unfolds.”

The second piece visitors will encounter on entering the gallery stresses the conceptual, and actually makes no sound.

“At the far end of that corridor will be Camille Norment’s Triplight,” a 2008 work, London said. “It’s a silent piece, and very visual, featuring a Shure microphone of the type that Elvis Presley or Frank Sinatra or Billie Holiday would have used. She stripped the innards and put a pulsating light inside that casts a shadow. That work suggests where the voice comes from, since the shadow looks like a ribcage.”

Visitors may be familiar with some works, for example a wooden subway bench by Tcherepnin that creates sound when viewers sit on it, which is currently on view at New York’s Murray Guy Gallery (through Apr. 20). Vitiello’s A Bell for Every Minute (2010), which samples the sounds of bells throughout New York City, was exhibited on the High Line, the elevated park in Chelsea.

Both these works will be installed outside of the main gallery space, Vitiello’s in the museum’s courtyard garden, with signage indicating that they are part of the “Soundings” show.

“We hope those pieces will lure people up to the third floor,” London said.