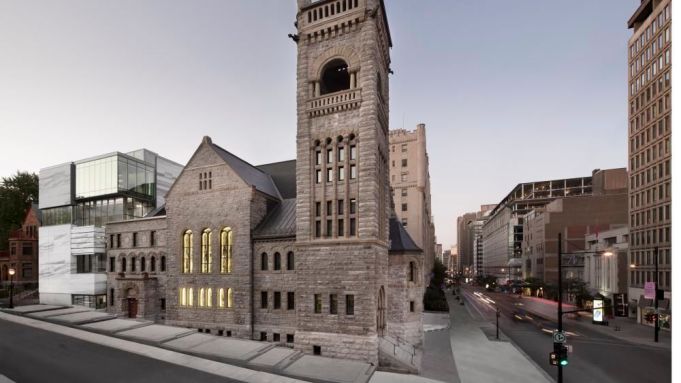 With its newly opened pavilion of Quebec and Canadian Art, the Montreal Museum of Fine Arts seeks to write the historical record for our neighbor to the north. Named for patrons Claire and Marc Bourgie, it features about 600 artworks, from the 1700s to the present, with one floor devoted to Inuit art. Montreal natives David Altmejd, Kent Monkman and Dominique Blain were commissioned to create site-specific works for the new facility.

The $42.8-million (USD) pavilion, designed by Provencher Roy +Associés, appears to be wedged into a space next to the Victorian Erskine and American Church, which was deconsecrated in 2004 and acquired by the museum in 2008. Greeting visitors out front is Altmejd’s suitably ecclesiastical new sculpture, The Eye, a monumental bronze angel whose deconstructed body, gaping hole of a torso and bent wing could be construed as religious commentary. Other featured artists in the new pavilion include Marc-Aurèle Fortin, Jean-Paul Riopelle and Michael Snow.

An underground gallery space connects the pavilion and the church, which features original Tiffany windows and, now, a concert hall in its nave. The new building has 25,263 square feet of gallery space on six levels—four above ground, two below—adding 20 percent of exhibition space to the MMFA’s overall total.

Farfetch Teams Up With Salvatore Ferragamo