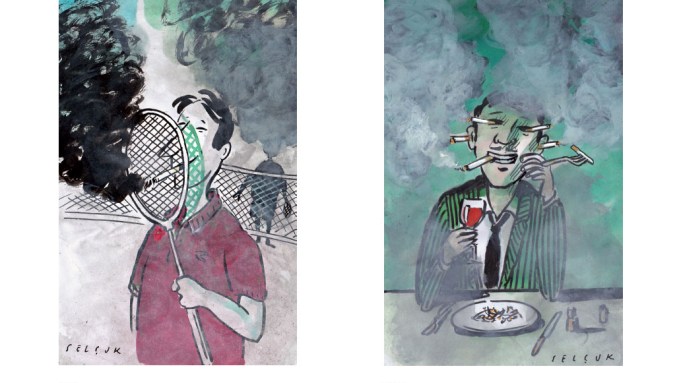 Among the late John Berger’s final texts is Smoke (Notting Hill Editions, 2018), a collaboration with Turkish illustrator Selçuk Demirel. The work is short, just sixty-seven pages, only twenty-six of which contain words, and it poses as a gift book. This would seem to make the project a minor entry in the Berger canon, especially in light of the recent publication of two major essay collections edited by Tom Overton, Portraits (2015) and Landscapes (2016). But it isn’t minor—as it happens, the book isn’t at all what it appears to be. Presented by the jacket copy as a wry pictorial essay about “society’s attitude to smoking,” it is instead a parable about storytelling after one of Berger’s heroes, Walter Benjamin.

Berger was a sensitive and willing collaborator. Throughout his career he partnered with visual artists, most prominently photographer Jean Mohr, on books and television programs that brought together images and text in quite radical ways. Here he works alongside Benjamin and Demirel, subtly inflecting their ideas and images, and, in turn, allowing his own language to be shifted—always in favor, as Berger remained, of the worthwhile changes in perception that come when genres and frames of reference are ingeniously juxtaposed.

To that end Demirel’s images do not dutifully narrate Berger’s words—except for when they need to. Instead, he presents beautifully metonymic drawings that are wise to the text yet playfully surreal: an archetypal black-and-white industrial scene, for example, is followed by a two-page spread, drenched in green, that shows a tiny man warming himself atop an enormous, smoking cigar. These illustrations fittingly take up a range of sizes, at times meeting the text on the page and at other, prevailing over pages in a sequence. But the effort is always in search of a shared aim: to tell a story about storytelling in a novel poetry of image and word. (Berger previously collaborated with Demirel on Cataracts [2012], an account of having surgery to treat the condition.)

Demirel sets the scene with drawings of smoking chimneys that hint of firesides within. Berger, for his part, sits himself down and begins in a grandfatherly way. “Once upon a time, men, women and (secretly) children smoked,” he says—it feels more told than written. “Whilst smoking together we exchanged our views on the world.” This is the language of a tale (“once upon a time”), of a story set in a past when people gathered and shared rumors, jokes, half-truths, and whatever else. The smoke of the book’s title becomes an image of this shared experience, which Benjamin, in his 1936 essay “The Storyteller,” simply called “storytelling.”

For Benjamin, the storyteller was the writer—of novels, poetry, or other forms—who set down the world of his community in the most faithful language, in the words and turns of phrase that best reflected the richness of shared life, the speech that travels, as he put it, “from mouth to mouth.” The passing of this figure into history was, for Benjamin, deeply lamentable, a symptom of the rapid incursion of information, finance, and war into the social body as he observed it in the early twentieth century. Indeed, Benjamin believed that storytelling and shared experience were all but synonymous, and that both had been almost entirely eliminated by capitalism’s exigencies. “For never has experience been contradicted more thoroughly,” he wrote, “than strategic experience by tactical warfare, economic experience by inflation, bodily experience by mechanical warfare, moral experience by those in power.”

Berger slyly updates Benjamin’s lament. Once upon a time, he writes, people shared their experiences while smoking together: “We described journeys. We discussed the class struggle. We swapped dreams. There was companionship.” In these pages, Demirel rather brilliantly provides images of togetherness that make literal Berger’s language, albeit without sentimentalizing it; these pictures recall a world that once had coherent meaning—before people were separated from one another. And so: smoke from houses rises and converges; two men on a shore observe a passing steamer, the boat conjuring memories of their past journeys; feline companions hug as their tails smoke skyward; a crowded, smoke-filled cityscape depicts the class struggle.

Then, of course, something changed: “A campaign of demonization began . . . Smoking became a solitary perversion.” It’s too easy here to follow the book’s jacket copy and read this as Berger’s anti-anti-smoking campaign, as a lament about no longer being allowed to smoke in bars. The lesson is instead one about modern life under capitalism, which more and more turns the social things we like to do into “solitary perversions.” Demirel’s drawings appropriately grow darker and less literal, representing the gap that forms between experience and meaning when social life breaks down. There are images of smoky skeleton heads rising from volcanoes, of cigarettes with no one to smoke them, of a machine gun with a smoking barrel, of cars trailed by exhaust fumes.

“Meanwhile,” Berger writes, “the heating of the planet through carbon monoxide continued unabated.” The target of his barb is a system that tells you that you can’t smoke when cars and agricultural companies can. The secondary target is this system’s wingman: the news media. For all his fascination with media, Benjamin thought the very existence of the newspaper, which told readers what was happening instead of letting them tell each other about it, signaled the death of shared experience. Berger is likewise skeptical of our heavily corporatized news media, with its predilection for curiously useless information.

“Words in the media today often function like a smoke-screen for hiding flames,” he offers in the book’s prologue—providing its first image of smoke. But what is the media hiding? The one-way street from media to reader, or user, allows news corporations the comfort of not having to lie to your face. “The government of North Korea has just announced that they have tested an H-bomb fired from a submarine,” Berger writes. Still: “No reflections around the fact that in the oceans of the world there are about sixty fully armed nuclear submarines awaiting instructions day by night.” In a sense, the smoke screen is the news itself, and the fire it hides is the damage wrought by capitalism.

Against this violent atomization of social life, Berger and Demirel show that nearly anything can be part of shared experience. And so anything, in Demirel’s images, may smoke. A tree or a flower, a glass of wine or a wine bottle. The book ends in a crescendo of smoking. Following its illustrations, I felt my own frontal and parietal lobes puff upward as I read. This capacity for smoking is, again, nothing more than the capacity to share and be shared—to become part of a story.

“Let’s make it a long story,” Berger writes, not without hope, near the end of Smoke. And he closes the book with another tale, which doubles as his final allusion to the lonely wanderer Benjamin, who in “The Storyteller” wondered whether it was the returning traveler or the homebody who told the best stories. Berger, who famously racinated himself in an Alpine village in rural France, played both parts in life. “Did I dream it, or did I once go to Iceland on the recommendation of my uncle Edgar?” he asks, before relating a parable about an Arctic expedition that reveals what a close reader has already learned. Smoke, he concludes, is a “sign of mankind”—evidence not of man’s endurance but of the promise of companionship and stories shared.

Smoke, then, really is a gift, only not one that you merely purchase—Berger always hated the idea of art as commodity. Instead, and against all cynicism, it’s something passed between Berger, Benjamin, Demirel, and the reader, who together form a smoking circle wherein a story might be told. Smoke, for those who will have it, is a cigarette of late style.