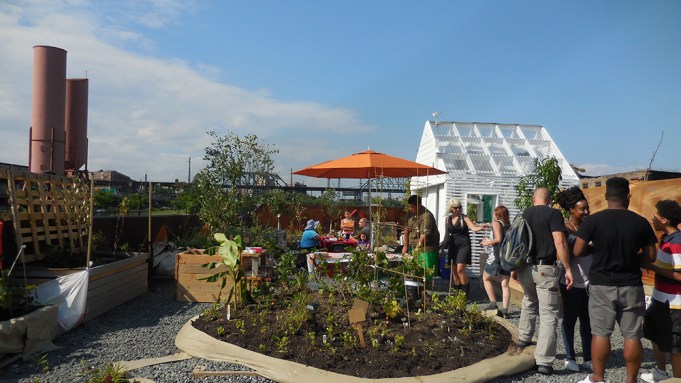 When Hurricane Sandy hit New York City in 2013, it flooded downtown Manhattan, parts of Queens, and Staten Island. An electrical substation exploded, cutting power to Lower Manhattan, and shipments of gas from New Jersey ground to a halt. Gas stations without electricity couldn’t pump; those that could soon ran out, causing huge lines and fuel shortages. In the span of a day, a hurricane revealed the precariousness of urban infrastructure in one of the richest cities in the country.

But if the hurricane and accompanying storm surge had hit nine hours earlier—at high tide—the results would have been devastating. One place that would have flooded had there been a few more feet of water is a half-acre peninsula in the Bronx called Hunts Point, the largest hub of New York City’s food supply. Almost sixty percent of the city’s produce, among other kinds of food products, arrives here on trucks and ships before being distributed to the five boroughs.

Just over a mile up the Bronx River from Hunts Point, Mary Mattingly has docked her newest floating project, Swale, a garden on a 130-by-40-foot steel barge. After discovering it is illegal to forage or even grow food in public parks in New York City, Mattingly conceived of producing a forest of edible plants on the water, to circumvent those laws and let people gather food for free.

She unveiled this project on one of the hottest Saturdays of the summer—in a year already hotter than all previous on record—docked at a promenade in Concrete Plant Park. At high tide, the barge was floating way above the dock, making it seem like a rusted metal building, but a sealed hull built to carry extremely heavy loads accounts for most of its mass. The barge was originally used for hauling sand and gravel in Louisiana, but a New York marina bought it a few years ago and is leasing it to the project on a “rent-to-buy” basis. Gravel has now returned to the barge, covering the hull plate and providing a level base for Swale’s plant growth.

Mattingly has created several waterborne, self-sustaining habitats before. WetLand (2014) and Waterpod (2009), built of repurposed wood and metal, had a post-apocalyptic feel. But Swale looks very different. It has the stripped-down utility of a relief ship thrown together by the National Guard or FEMA, and the whole project blends the aesthetics of DIY with those of government surplus. The plants sit in mounds of black soil encircled by large round bladders made of tan rubber, the material that the army uses to hold water in the field. Planters made from the same material and framed with wood sit against the gunwales, overflowing with green tomatoes, strawberries, and fronds of thyme. In the front of the barge, a low coop behind brand-new chicken wire houses a few hens. In the aft, a row of square plastic drums, each about four feet high, holds Swale’s water supply and filtration system. One drum is open at the top to catch the rain, while another is filled with sand and gravel to filter toxins out of collected river water. The only building on Swale is a slatted white cabana made by the international environmental-design collective Biome Arts. Called the Greenhouse Theater, it is rigged with projectors to illuminate its walls at night with visualizations of data drawn from sensors embedded in the Swale plantings. Members of Biome Arts will use Swale as a base for their own projects and programming.

Swale continues a tradition of artists using real boats to make symbolic gestures. Robert Smithson’s vision for a floating barge forest was realized posthumously in 2005, and Swoon has worked on several collaborative boat projects, from the Miss Rockaway Armada (2006) to the Swimming Cities of Serenissima (2009), that launched raft flotillas crafted from trash and powered by veggie diesel. The Parrish Art Museum in Water Mill, New York, recently explored this lineage in an exhibition entitled “Radical Seafaring,” which included work by Mattingly alongside that of Smithson, Swoon,  Mark Dion, Bas Jan Ader, and many others. And artists aren’t the only ones dreaming of creating communities on the water that cannot be realized on land. In 2007 NY Sun Works inaugurated the Science Barge to model sustainable urban farming using recirculating greenhouse hydroponics. Peter Thiel, PayPal founder and Trump supporter, has put half a million dollars toward creating so-called “seasteads”—self-sufficient, libertarian enclaves in international waters, beyond the reach of extant legal systems.

Swale’s goal, however, is not merely to create an autonomous zone on the water, but also to prefigure what could happen with freshly grown produce and public space on land. “Swale is a call to action,” Mattingly declares on the project’s website. “It asks us to reconsider our food systems, to confirm our belief in food as a human right, and to pave pathways to create public food in public space.”

Like a lot of social practice art, Swale treads a fine line between aesthetics and activism. Artist Casey Tang and permaculturalist Jono Neiger designed the layout for planters. Nurseries in New York and New Jersey donated the majority of Swale’s plants, growing them through the spring and transplanting them once the barge was ready. The Parks Department gave plants as well, and Mattingly will solicit more contributions to replenish the supply. Liz Lund and Lonny Grafman, engineers with a focus on sustainable design, built Swale’s water system, while Rand Weeks, Swale’s electrical engineer, rigged the solar panels that power the lights and water pumps.

Members of the Bronx-based Youth Ministries for Peace and Justice are paid to be docents while the project remains at the Concrete Plant Park, and the Bronx River alliance is scheduling events on the barge. When the project moves to other waterfront parks (Governor’s Island on August 16, Brooklyn Bridge Park on September 15), Mattingly plans to partner with other local groups in similar ways.

Swale may never grow enough food to feed a large number of people. But that seems beyond the point. With Swale, Mattingly has tried to allow the visitor—as well as activists, researchers, and other artists—to be simultaneously in the city as it is and outside the city, in a space of possibility where the city could be different, legally and conceptually.

It is difficult to comprehend the complexity of the systems related to climate change and food scarcity and then imagine replacing those systems with a better way of living. In an interview, Mattingly talked about using the self-contained nature of a boat to help people to take those steps. “It is difficult to see an entire ecosystem, like the one we live in every day,” she said, “but these contained spaces on the water can be microcosms that make it easier to understand.”

In a post-Sandy action plan entitled “A Stronger, More Resilient New York,” the city government recognized Hunts Point as a piece of critical infrastructure in a fragile and concentrated food supply chain. In the face of climate change it has put $45 million dollars towards levees and generators to shore up the neighborhood against the next storm surge or power outage. But the distribution centers in Hunts Point represent a precarious system that makes city dwellers dependent on food that is unhealthy and expensive for them and for the environment. To the city, resilience means helping a broken system limp along. On board Swale it means finding a new way to provide food for people, whether in the city or on the water that surrounds it.

In Copenhagen, Playing by the Rules Can Still Be Fun