The Tbilisi Kunsthalle feels like a promising project because it is sensitive to the nimbleness of Georgian artists’ adaptation to art-world habitats Movable Feast: Tbilisi’s Art Scene – ARTnews.com
Skip to main content 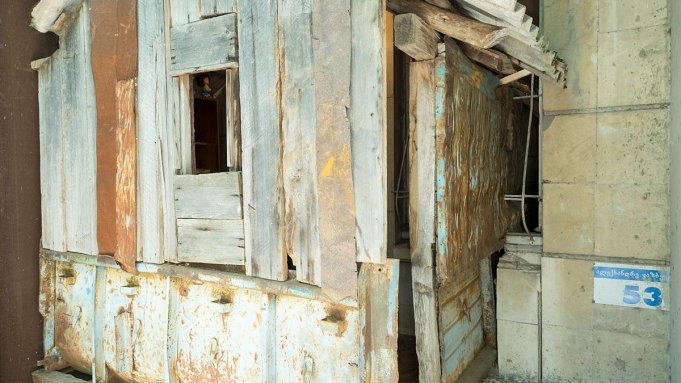 On the last day of a trip to Tbilisi last month, I toured an exhibition that does not yet exist: the first Tbilisi Architecture Biennial, scheduled to open in October. The curators led a group around Gldani, a neighborhood in the Georgian capital’s outskirts that will serve as site and subject of their exhibition. Gldani was designed in the 1970s as a “micro-district,” a Soviet unit of urban planning with housing and amenities like schools and shops built in proximity to factories. The architecture is the cheap and faceless sort typical of the late Soviet period. But in the 1990s, when factories closed and apartments were privatized, people adjusted the facades and floorplans of their homes, altering the texture of the neighborhood in unpredictable ways. This vernacular architecture is what the new biennial’s curators want to highlight and theorize. One of their observations is that families who lived in Gldani during the Soviet period have made fewer changes to the neighborhood than the many migrants from rural Georgia, where local economies have been depressed since the 1990s; Gldani’s newcomers have modified courtyards with pavilions, shared gardens, and other aspects of country life.

I noticed dramatic changes to Tbilisi since my first visit to the city over a decade ago. Georgia has received substantial aid from the US since the early 2000s (a major avenue is named after George W. Bush), and that only increased after the country’s 2008 war with Russia. Much of the money has been invested in the hospitality industry: Tbilisi sports a number of new or remodeled hotels, restaurants, and other amenities that attract hordes of tourists (including many from Russia). These changes are striking on the surface. But artists are paying attention to shifts in the local population and the rhythms of everyday life. The mass migration from rural to urban areas discussed by the architecture curators was also the subject of Nika Kutateladze’s installation Watermill on Former Pavlov Street (2018), one of the two inaugural projects of a new nomadic institution called the Kunsthalle Tbilisi. Kutateladze dismantled a wooden house from his family’s ancestral village in western Georgia, where he often spent summers as a child, and rebuilt it inside an apartment in the capital. He cut a hole in the apartment building’s façade so it could fit, and the structure is visible to passing cars, peeking out from construction scaffolding. Inside, the installation is dominated by the titular watermill, an apparatus about four feet wide for grinding flour. Such mills are commonly found in rural areas where food deficits are the norm. But these days homemade watermills often sit unused, as cities get bigger and villages empty out. Kutateladze’s project gives material form to otherwise invisible patterns of movement; the hut’s rustic interior coexists with the apartment’s Soviet furnishings: a threadbare green couch, an outdated wall calendar, an embossed copper depicting a sailboat, evoking some sea distant from both Tbilisi and the village.

Kunsthalle Tbilisi is a project of Irena Popiashvili, formerly director of Newman-Popiashvili Gallery in New York, now a curator who drives much of the activity in the city’s small art scene. The other project that she organized for the Kunsthalle’s opening is Angelica Mesiti’s Relay League (2017), a three-channel video installation projected in cavernous, dusty rooms of a former winery downtown. Metisi enlisted a percussionist to compose a piece based on the French navy’s last message sent via Morse code in 1997, before it was replaced by a new global system for emergency communications: “Calling all. This is our last cry before eternal silence.” On one channel, the musician plays his drums on a Paris rooftop, jamming on the contrast of dot and dash with staccato beats and sustained ones. As the piece goes on the rhythm gets warped; the tempo and timbre change. On the other channels, a pair of dancers choreograph and execute movements to the work; the two have developed their own tactile language as a form of physical dance notation, instructing each other by touch. Popiashvili’s plan for the Kunsthalle Tbilisi is to launch two simultaneous projects on a quarterly basis, one by a Georgian artist and one by an artist from abroad, generating correspondences between them. In this case, you might say that Mesiti’s work brought out the themes of transmission, movement, and obsolescence that hover around the social concerns of Kutateladze’s installation.

The Kunsthalle Tbilisi opening coincided with the weekend of the Tbilisi Art Fair, held May 17-20 and billed as the city’s first international fair, though there were earlier weak or abortive efforts. This one felt like a success: an airy pavilion at the Expo Georgia convention center hosted thirty-three gallery booths, a manageable number that could easily be absorbed in the course of a leisurely afternoon. Most presented pleasant, lyrically quirky work. Vanda Gallery of Tbilisi showed abstractions on silk paper by Maia Tsinamdzgvrishvili. Their pigment bleeds in charmingly uneven checkerboard patterns up to the sheets’ rough edges, and silk threads woven into the paper’s pulp are wound into tight whorls. The display of Berlin’s Galerie Kornfeld included expressive landscapes from the 1980s by Natela Iankoshvili, where thick applications of bright colors against stark, void backgrounds evoke verdant mountain ridges. Under the name Ovcharenko Project, Moscow-based Regina Gallery presented several Aleksandr Tsikarishvili portraits of old women, assemblages of soil, paint, and bits of discarded rags that looked both rough and tender.

The fair’s series of talks regurgitated variations on the question: How can Georgian artists find success in the international art market? But the presence of Georgian artists at the booths of foreign galleries suggested that they already have. So did another exhibition that opened the same weekend, “Twelve Women Gone Missing,” organized by curator Elene Abashidze at two venues, featuring works by a dozen Georgian women who live and work abroad. At the Writers’ House, a grand mansion that served as an elite club for members of the Soviet-era Writers’ Union, hung haunting paintings by Germany-based Thea Gvetadze, in which faces appear as ghostly masks swirling in oily mist. The second venue was the State Silk Museum, which regularly hosts shows of contemporary art while maintaining displays of textile swatches and silkworm cocoons in imposing wood-and-glass vitrines that seem to have changed little since the museum was established in the late nineteenth century. In one otherwise empty gallery hung prints on film stock by Tamara K.E., their thick, floppy translucent material saturated with patches of black, pink, and oranges. Photographic pieces by Keti Kapanadze were inserted in some vitrines; phrases spelled in shadows or cutouts—help my and touch my—are incomplete or grammatically incorrect, conveying an open-ended meaning to match their mysterious materiality. Kapanadze—who is revered in as the only woman to participate in group shows in Tbilisi when conceptual art emerged from the underground in the late ’80s and early ’90s—also had a solo show opening that weekend at the Tbilisi History Museum, which, like the Silk Museum, was not built for contemporary art but has welcomed it.

Of course, the people interested in the success of Georgian art on the international level are more concerned with Georgian art becoming a brand capable of attracting curators and tourists and collectors to the city than they are in the careers of individual artists working on their own terms. The Kunsthalle Tbilisi feels like a promising project because it is sensitive to the nimbleness of Georgian artists’ adaptation to art-world habitats—a position embodied by its rejection of a building as an anchor and of a white-cube model that is already becoming obsolete. Like the artists it seeks to promote, the Kunsthalle is attentive to local realities as it looks outward to find correspondences in the international scene and present them in Tbilisi, rather merging the two on a readymade platform like the fair or the museum. At the openings and events around Tbilisi that weekend—in construction sites, ruins, and non-art exhibition spaces adapted to show art—there was a festive, convivial feeling, with homemade amber-colored wine flowing from plastic water jug. Instead of an art infrastructure as we know it, this scene gave the impression of a flexible system, with readily changeable roles of mentor and student, host and guest.

Katy Perry Talks ‘Kampy’ Residency, New Music, and How She Knew Dua Lipa Was the ‘It Girl’