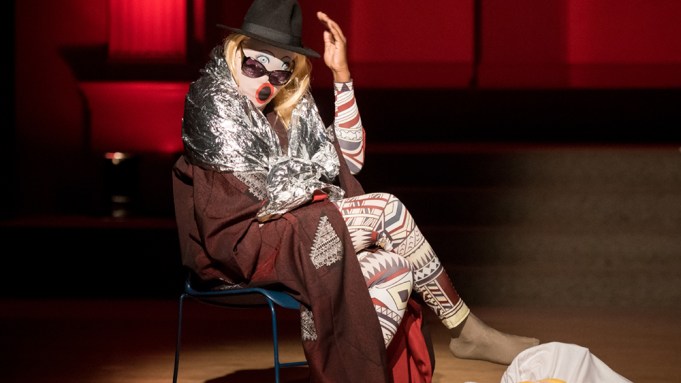 Last Wednesday’s ACT UP meeting was gloomy. Members of the AIDS-awareness activist group had been preparing strategies for actions under a Clinton administration. Amid the confusion, anger, and fear, the longtime members-the ones who joined in 1987, marched, chained themselves to the VIP balcony at the New York Stock Exchange, and continue to fight today-expressed the sense of having been through this before. Meanwhile, the younger members realized that if the fight against AIDS had been de-politicized in recent years, it was on us to pick up the banner and remind the world that it’s not over.

This fall’s Platform series at Danspace Project in New York was part of this struggle. Organized by choreographer Will Rawls and Danspace’s chief curator Ishmael Houston-Jones, “Lost and Found” was a sprawling curatorial project about the impact of AIDS on the dance community, one that rectifies the erasure of people of color and women from the history of the fight against AIDS. “Lost and Found” comprised over twenty events at numerous venues over five weeks in October and November. The fifty-some contributors named in the catalogue span several generations and disciplines, with club kids, academics, filmmakers, activists, artists, musicians, classically trained dancers, voguers, poets, and critics offering a stirring example of how a community can come together around an issue. In dark times both past and present, it takes a coalition to make a difference.

Jaamil Olawale Kosoko’s dance Seancers (2016) was a high moment of the pugilistic part of the program. Working with musician M. Lamar and composer and designer Jeremy Toussaint-Baptiste, Kosoko set up a powerful interrogation of the way whiteness restricts and confines and fails to provide ways out. An amplified reading of the black queer feminist poet Audre Lorde’s “Power,” 1978, which recounts a not-guilty verdict for a white male police officer who murdered a ten-year-old boy in Queens, boomed throughout the sanctuary. It was written in 1978, but it could just as easily be about the present. That terrifying realization electrified the atmosphere. Over the course of the performance, Kosoko was trying on different costumes, and as the poem played he donned a blond wig and sat with his back to the audience, and M. Lamar took a pause from his loud interjections of commentary that punctured the sonic stability of the other scenes. The piece ended with Kosoko in a chair with a white blow-up doll on his lap. He used the doll as a ventriloquist’s dummy to read “Where Does It Hurt,” a talk that Ruby Sales, an activist since the Civil Rights era, gave earlier this year at a convening of twenty theologians seeking to use their vocation for the public good. Her text describes how late capitalist structures reinforce the white working class’s scapegoating of blacks and other minorities when the system fails them. It was jaw-dropping at the time, but has only become more so after the election since the people Sales wrote about helped put Donald Trump in office.

An important theme of “Lost and Found” was the alternative practices of care, maintenance, and support. On October 18, activist-artists Jack Waters and Peter Cramer organized a night emphasizing the power of zines in communities that don’t have established outlets. Waters welcomed attendees at the small yoga studio on St. Mark’s Place wearing a T-shirt that said “HIV Positive.” He and Cramer guided us through a night of zine making, art, and dance. They presented artist Susan Salinger’s Memory Box (2016), a contained projection box standing nearly eight feet tall with an hourglass that dropped bluish sand over the video projection. The work was particularly haunting, as the sand fell over archival footage of male dancers from the past. Douglas Dunn, the inimitable choreographer, presented an excerpt from a larger autobiographical work performed by his company Douglas Dunn + Dancers, Aubade (2014), an impossibly tense and erotic duet danced by Paul Singh and Chris Williams with live music provided by Steven Taylor. In the crowded, tight space, the already intimate dance proved overpowering-even more than if it had been in larger quarters. It was an unseasonably hot night and we in the audience sweated along with them as we came together to act up, remember, and look ahead.

The Skeleton Architecture, or the Future of Our Worlds, a dance at the sanctuary in St. Mark’s Church organized by Eva Yaa Asantewaa, an activist, radio broadcaster, teacher, and writer, was perhaps the most ambitious and challenging night of the program. Asantewaa asked twenty black women and non-binary dancers to respond to five choreographic prompts, stemming in part from African-American magical spirituality: the walk, the sermon, the flood, the haunt, and the planting. As the dancers worked through their given tasks, they would periodically individually retreat to a bowl to retrieve the next set of instructions. In channeling the tasks and prompts given by Asantewaa the program sought to transform the sanctuary into a site of possibility through a guided improvised two-hour dance “energized by the black mothers in each us. Each InterSection can represent Place in past, present, future or time beyond time.” The dancers ranged in age, body size, and attire. Their orderly lineup on the church’s stage at the beginning of the night gave no indication of how they would completely transform the space. At any given moment, distinct actions and interactions occurred in at least six different lines of sight, some upstage left, right next to the audience, some on the balcony, some on the stage, some behind doors, some center stage.

Self-care and care for others have long been mainstays of feminist activism and resistance, and are now finally starting to be given their due in the art world. It is important to remember that this isn’t a fad, and not something that will get chewed up and spit out, but tied to maintaining safety and sanity in persecuted communities. Asantewaa’s night was a powerful reminder that the future is female.

Variations on Themes from Lost and Found: Scenes from a Life and other works by John Bernd (2016) was the namesake of the series, a bold reimagining of the choreographer and artist’s work by Ishmael Houston-Jones and Miguel Gutierrez. The work pulled together segments from seven dances Bernd choreographed during the last seven years of his life before he died from AIDS-related complications. Bernd was a firebrand for the downtown community in the ‘80s. He incorporated projected drawings and song into his breathless and frantic dancing, and was one of the first if not the first choreographers to address AIDS with modernist and postmodernist dance tactics. He made work right up until his death, famously leaving his hospital bed to attend a performance. There is always difficulty inherent in re-creating old work, especially in the absence of proper notes or documentation, but Gutierrez and Houston-Jones’s interpretation was vibrant and true to Bernd’s spirit. From the opening, when seven dancers in tighty-whiteys gyrated to the gorgeous and gigantic boogie funk of S.O.S. Band’s “Just Be Good to Me,” to the elongated vertical line from right in front all the way to the back of the sanctuary stage the dancers formed and freak-danced to Prince’s “Dirty Mind,” it was equal parts hilarious, heartbreaking, exhilarating, and exhausting. Gutierrez and Houston-Jones managed to track down the red chair from Bernd’s original performances in the 1980s at PS122’s warehouse in New Jersey, which added a poignant touch as it was spotlighted throughout different moments of the performance sometimes in isolation as all the dancers were off to the side, acting almost posthumously as a totem for Bernd himself. The symbolism in Bernd’s work is never aggressively heavy-handed, but cheeky and casually touching. I was holding back tears towards the end of the night when one of the dancers was lit from above washing himself, as if he were in a Degas painting of a bather. I was laughing hysterically when the other dancers joined him in the center and brought out a blender to make a special vitamin, drug, beer cocktail to fight the effects of AIDS. The performance was replete with the beauty of life and joy of living, as the dancers pranced up and down the floor running out of breath occasionally as New Order’s “Temptation” played. Equal parts a document of a failing body, and the spirit’s will to live and fight on, this was a performance that will stay alive for me for a long time.

If the recent election wakes everyone up to the frightening possibility of what might happen to the communities most at risk of AIDS, it is perhaps important to highlight that there has always been hatred, misunderstanding, and dismissal. In 1994, dance critic Arlene Croce wrote a lengthy essay, “Discussing the Undiscussable,” in the New Yorker about her refusal to review Bill T. Jones’s Still/Here (1994), an evening-length work at the Brooklyn Academy of Music that took as inspiration in part movement by the terminally ill, stating that calling attention to AIDS in such a performative way puts the work beyond criticism, turning it into an inscrutable gesture of “victim art.” Even if protests to such a position would be louder today, we haven’t fully moved past that moment. Critics like Croce just hide their language in false niceties and dismissive politesse. Sporadic concessions to politicized art don’t absolve the larger structure of its complacency, and “Lost and Found” is a way forward in its willingness to address conservatism across the board.

From Kacey Musgraves to Paramore, Here’s How to Watch the Austin City Limits Music Fest Livestream Online for Free