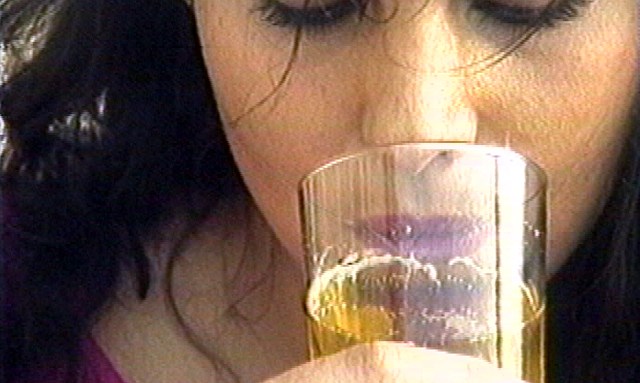 Unlike previous years, video was surprisingly well represented this year at Art Basel Miami Beach, which is otherwise focused on static objects for sale. Many more dealers were exhibiting video work in their booths; there were also films presented, as in previous years, in a cluster of viewing pods located in the middle of the fair (curated by David Gryn, director of Artprojx, London).

Galerie Krinzinger of Vienna showed two strong video works. Incision documents a 1978 performance in Graz, Austria, by Marina AbramoviÄ? and Ulay, in which a naked Ulay, tethered to a wall by an elastic rope, lunges repeatedly toward the camera, as a frumpily dressed AbramoviÄ? stands woodenly to the side. At the end of the 25-minute film, in accordance with the rules they established for the performance, a man from the audience runs into the frame and brutally kicks AbramoviÄ?, knocking her down in a one ferocious blow.

New York’s P.P.O.W. Gallery exhibited two excellent videos, along with still photographic documentation, of pioneering performances by Carolee Schneemann. Body Collage (1967) shows Schneemann gleefully smearing her nude body with wheat paste and rolling in scraps of paper in order to make them adhere to her skin. A second video documents her seminal performance Meat Joy (1964) in which participants in their underwear ecstatically frolic in raw animal products and blood. The photo series 36 Actions Performed for the Camera (1963/2005) depicts Schneemann naked in her studio in the 1960s, draped in snakes and translucent plastic sheeting, wearing a horn on her forehead, and posing with other odd arrangements of objects.

In the Positions section of the fair, devoted to single-artist projects presented by emerging galleries, Colombian gallery La Central displayed The Water that You Touch Is the Last of What Has Passed and the First of that which Comes (2013), a 15-channel panoramic work, at once serene and disturbing. Filmed in the riverside Colombian town of Honda, the video shows the villagers going about their daily life as the river flows around their homes. The scenes are bucolic, while also recognizing the inhabitants’ poverty, an indication of the artist’s ongoing interest in issues of class and equality.

Also in the Positions section was Ulrik Heltoft’s witty The Origin of Specimen 52v (2013), presented by Copenhagen gallery Andersen’s Contemporary. Heltoft, costumed as a prehistoric man in abundant animal fur, traipses through the landscape, sometimes with a human skull, which in one scene he buries in the ground. The skull motif is most likely a reference to the tragedy of the Danish prince Hamlet, who contemplates death in the gravedigger scene of Shakespeare’s eponymous play while holding the skull of a deceased court jester.

The gallery installation also includes documentation from a related project of three-dimensional models built and subsequently photographed by Heltoft. The artist constructed models based on illustrations of plant species found in the 500-year-old Voynich manuscript, which is housed in Yale’s Beinecke Rare Book Library. Like the video, the photographs are an apocryphal representation of primordial nature.

Guadalajara-based Gonzalo Lebrija’s Who Knows Where the Time Goes (2013), at Travesia Cuatro in the Art Nova section of the fair (for younger galleries showing work produced in the past three years), is unforgettable. The video shows books being thrown into the air and the artist shooting them with a rifle, a Dadaist gesture targeting the vestiges of Romanticism. Displayed near the video screen was the framed title page of Tolstoy’s Death of Ivan Illyich, pierced by a bullet hole.

The dozens of films in the viewing pods at the fair represented a diverse cross section of contemporary artists. Here are some highlights:

In the hypnotic black-and-white film Orellana’s Fantasia (2013) by Mexico City-based Carlos Amorales with Julian Lede, the avant-garde musician and composer Joaquin Orellana is shown playing xylophone-like musical instruments that he invented, which resemble the wire constructions of Alexander Calder.

Glaswegian David Shrigley’s Headless Drummer (2012) is a pitch-perfect, one-minute animated line drawing of a headless figure playing a drum kit. Shrigley’s equally short New Friends (2006) clearly tells the story of a square-shaped cartoon who is thrust into a world of circular figures who helpfully mill him into a rounded shape.

New Yorker Dara Birnbaum had a half-dozen films in the pods, among them a reconfigured version of her appropriationist Arabesque (2011), which explores the tortured relationship between 19th-century married composers/pianists Clara and Robert Schumann through excerpts from an old Hollywood film starring Katharine Hepburn, as well as YouTube videos of pianists playing Robert Schumann’s composition of the same name.

The ever-rewarding Joan Jonas’s Reanimation (2010) includes footage of the artist drawing in the snow with ink, a long tunnel in a snowy landscape and mesmerizing shots of snow blowing across a highway.

The French street artist JR’s Women Are Heroes manages to reveal the joy and precariousness of the everyday lives of women living in a favela in Rio without becoming preachy. As seen in the film, images of faces and eyes had been painted on the exteriors of homes in the favela in the artist’s public art piece there. The lurching, comic speed of the film and the cheerfulness of the favela’s inhabitants prevent despair from overwhelming the project

Simple and ravishing in its beauty, Colombian Oscar Muñoz’s black-and-white Hombre de Arena (2006-09) might be called a “sandimation.” Muñoz creates a line drawing of a man crawling across the sand, thwarted Sisyphus-like each time by the wave that washes him away before he can get very far.