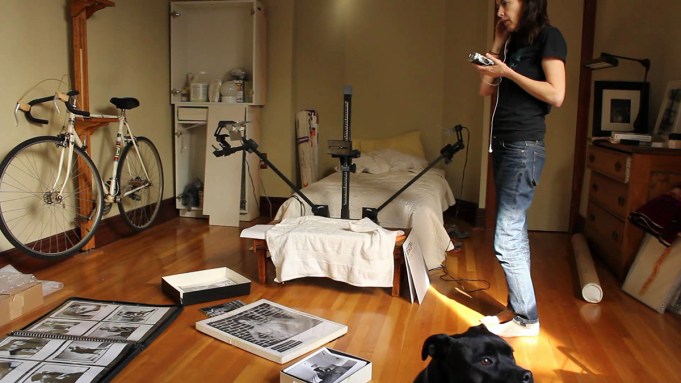 From Reader to Writer: On a New Book by Moyra Davey

For me, Davey, who is sometimes described as a “conceptual artist using photography,” or someone who “works across photography, video, and writing,” fosters a space in which discourse on the arts (photographic and literary histories, in particular), fiction, critical theory, and autobiography flow together, frequently taking the form of pictures rather than sentences or paragraphs. As we learn in Index Cards, which contains fifteen prose pieces dating from 2006 to 2019, as well as a number of small black-and-white reproductions of images by Davey, there is a certain “magic circle” drawn around the authors Davey prefers. “Magic circle” is a phrase that the critic Walter Benjamin applied to the act of creating a collection, and with it he implies at once the synthetic quality of collections and the collector’s selectivity, according these a mildly occult valence via his chosen metaphor.1 The collector is a creator not just of piles of stuff, but of categories, genres. And with new genres come new aesthetic possibilities. Davey’s “magic circle” encompasses those writers who form the grounds from which her photographs, as she says, “take seed.” Her canon includes (but seems not to be limited to) James Baldwin, Roland Barthes, Benjamin himself, Jane Bowles, Jean Genet, Hervé Guibert, Violette Leduc, Janet Malcolm, Susan Sontag, Robert Walser, Simone Weil, Mary Wollstonecraft, and Virginia Woolf. Along the edges of this circle, figures such as Freud, Goethe, Kafka, and Muriel Spark crop up. These sources may seem disparate, but as one reads Davey’s reflections on reading and writing—co-implicated activities—it becomes apparent that all are assembled for a reason. Each has a distinct relationship to detail and clarity in prose, as well as a unique affection for mixing firsthand, reportorial, or autobiographical writing with the fictive or speculative. And while some existed (Wollstonecraft, Goethe) before photography was, strictly speaking, a thing, there is nonetheless something of a photographic impulse in all this writing: a drive to describe and to render as image, a boundless hunger for vividness and particularity that would seem to threaten to exceed the limited capacity of words.

In one of the most beautiful texts in Index Cards, “Les Goddesses,” (The Goddesses), which also serves, as I note above, as a script for Davey’s film of the same name, Davey reflects on the heroic, peripatetic existence of Mary Wollstonecraft (1759–1797), feminist, historian, novelist, and philosopher. Davey derives the piece’s title from the superlative nickname given to Wollstonecraft’s two daughters, Fanny Imlay and Mary Shelley (author of Frankenstein), as well as Shelley’s stepsister, Claire Clairmont. Upon meeting these three accomplished and desirable women, American politician (and Alexander Hamilton antagonist) Aaron Burr bestowed the sobriquet. Davey writes, “The real story concerning the lives of these extraordinary women is filled with many paradoxes, and without a doubt it is more fantastic than any fiction.” “Les Goddesses” is additionally an account of Davey’s fascination with travelogues—with Goethe’s report of his voyage to Italy, Louis Malle’s documentary Phantom India (1969), Wollstonecraft’s descriptions of her time in Scandinavia, Mary Shelley’s collaboration with Percy Bysshe Shelley on History of a Six Weeks’ Tour through a Part of France, Switzerland, Germany, and Holland; with Letters Descriptive of a Sail Round the Lake of Geneva and of the Glaciers of Chamouni—and it is also a study of family dynamics, of how, in particular, sisters imitate and reflect one another. It is, thus, an essay about how images circulate within families, how family members create images of themselves, identify with one another or elect not to. To this series of themes Davey adds one further: the difficult-to-narrate history of her relationship to alcohol, what she terms “the Wet.” It is a testament to the capaciousness of Davey’s thought that she is able to weave personal memory and literary and political history together in a series of extended and interconnected gazes—or, better, breaths. Near the end of “Les Goddesses,” Davey quotes Benjamin: “There is a delicate empiricism which so intimately involves itself with the object that it becomes true theory.” It seems to me that much of Davey’s writing goes in search of such a theory, an innovative genre that discovers its remarkable combinatory capacity through engagement with minor, fugitive qualities, as well as an openness to discovering intimate facts in sometimes impersonal and distant places.

In the film versions of her essays, Davey reads from a stack of pages or repeats words from a recording she listens to on an iPhone, one earbud in, the other hanging from its cord. This documented repetition, the recirculation of language already written and, then, in many cases existing as quotations from other sources within that very writing, heightens our sense that, wherever we are in relation to Davey’s language, we are already well within the province of something that has come before, with text standing as a preexisting item or object that is here merely recycled, reshown, lived through once more. With Davey, we are always in medias res. There are no beginnings in her accounts; narrative origins are refused, because they aren’t really good for anything. Worse than this, they are often chimeras. And I think this brilliant capacity on Davey’s part to transport her reader or viewer or listener into the very midst, the heart, of a given text, is what most distinguishes her practice. Davey says of her engagement with scripts and words, “One of the ways I’d kept photography alive for myself was through writing.” We might expand this statement to see writing as a more general practice for artistic and personal survival, in which repetition, far from dulling experience, richly complicates and supports life.

1 Walter Benjamin, “Unpacking my Library: A Talk about Book Collecting,” in Illuminations, translated by Harry Zohn, edited and with an introduction by Hannah Arendt, New York, Schocken Books, 1969, p. 60.