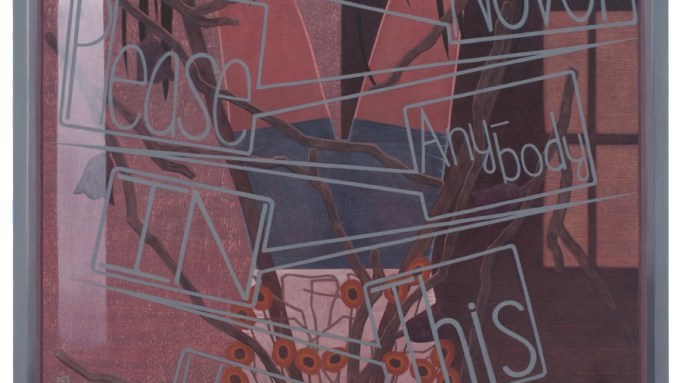 Not only am I endlessly trying to spackle over the pitted contour of my essential self by imitating what I see and seeing only what I desire, but, like any good person mildly touched by narcissism, I’m convinced that the task and particularities of being me (or anyone, really) is a special one and somehow worth comprising the “content” of my art. So anything that melodramatizes and/or theorizes the twists and turns of being a person is cool with me.

Jennifer Hudson, “Weekend in New England.” Jennifer Hudson, then twenty-two, on American Idol Season 3, screaming a key change in a Barry Manilow song no one has ever heard of, with the voice of God, and then getting promptly eliminated. The second greatest electoral failure of this millennium.

Betty Buckley singing Cats. That the stupidest story ever written in the stupidest genre ever created (i.e. musical theater), containing, as its climax, the stupidest, most treacly song ever sung, still activates my sympathy confirms I have at least one good thing going. Mostly I like it when Betty Buckley, as Grizabella (the superannuated Glamour cat) presses her paws gingerly on the stage. Cats are kind of like that, actually.

Patti Lupone singing Rose’s Turn, from Gypsy. Rose, the brazen, willful stage mother of the eponymous Gypsy of the 1959 musical is a legendary figure. In this video, Patti Lupone, a famously “fiery” musical theater actress playing Rose, pixilates into an overwrought blob as the videographer’s cell phone crops out the stage and imprisons her in a darkened bubble where she shifts, maniacally, from grandeur to debasement and back again. There’s another clip of this performance in which an audience member takes a cell-phone picture of Lupone, prompting her to halt, scream at the offender, and refuse to continue until they are ejected from the theater. Sadly, that clip has been taken off the internet.

Excerpt from Janet Adler’s film “Still Looking.” This is from a documentary about Authentic Movement, a form of therapy developed by Mary Starks Whitehouse (1911-1979), who was a student of choreographer Martha Graham. As part of the practice, one participant taps into the internal stimuli of their subconscious through improvised movements while another person “witnesses.” I’m very moved by and interested in these women’s attempts to induce an action that is purely expressive, to escape the prisons—patriarchal, linguistic, or otherwise—of hard-wired structural patterns that serve primarily to inhibit.

Meisner Technique Video. This video is an excerpt from a documentary about the Meisner technique, a mid-century relational acting pedagogy formalized by Sanford Meisner (1905-1997). Around 1:00, Frances Sternhagen, who would go on to play Bunny MacDougal in Sex and the City, relays an increasingly esoteric list of pagan “secrets.” Then, modulating her tone and bearing slightly, she repeats the scene to palpably greater and more emotionally valent results.

How To Fake Cry | Jenna Larson. A conventionally beautiful white teen girl teaches you to cry on command. There are—unsurprisingly—a lot of these tutorials on YouTube

Aaron Kunin’s poetry. Though the art world has of late absorbed most diaristic and/or confessional contemporary poets, Aaron Kunin, who is well-respected in his field (as far as I can tell), has inexplicably failed to cross over. Early in his twenties, Kunin developed an obsessive-compulsive nervous tic whereby he began transcribing words he heard or said or thought into finger patterns that he tapped out. Soon, he realized he was tapping out certain words without an ambient prompt. He compiled those words into a neurotic vocabulary (e.g., “moron,” “rat,” “dick,” “laughter,” “machine”) that he calls his “white noise” phrase bank. Limiting himself to that vocabulary, he translated sections of Ezra Pound’s “Hugh Selwyn Mauberley.” The poems themselves are as good, and as perverse, as the premise.

Allie Kay. “Outsider artist” is always a condescending label, and, accordingly, it’s a bit smug (here also classist) to attribute any less agency and creative autonomy to Allie Kay than to any other person who has taken the time to make something for an audience. However, Kay, an aspiring lifestyle vlogger, remains a fascinating and legitimately admirable example of how the internet enables, against all odds, some cultural democratization, and still has original “content” at its farthest reaches. At the point when the beauty/wellness/Starbucks industrial complex has completely colonized the imagination of young people (myself included), it’s refreshing to see someone like Kay, who possesses enough authenticity that she fails to flawlessly emulate the people, trends, and affectations she idolizes. I’m certainly no better at being myself than she is, and I appreciate people who refuse to hide the labor of crafting the persona they want the world to see.