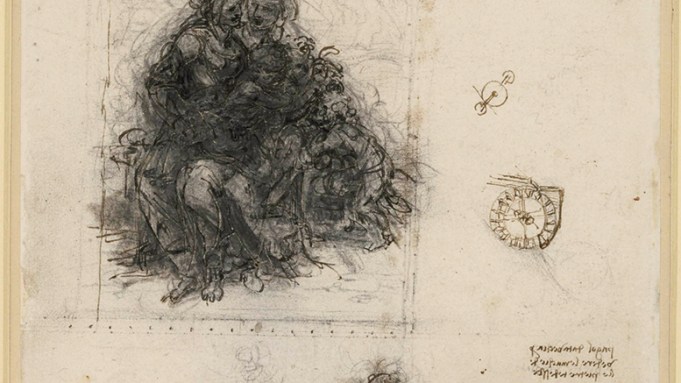 Art historians have adopted the Italian word pentimenti to refer to the traces of previous decisions visible beneath the surface of a finished painting. The word’s original meaning, “repentances,” casts this residue of making in moral terms: the artist’s remorse for a “wrong” precipitates a correction to a “right.”

I saw pentimenti for the first time when I was about eight years old, on one of many trips I took to Moscow’s Pushkin Museum with my grandfather. As we stood in front of Matisse’s Nasturtiums with “The Dance” (II), 1912, I noticed that several of the peachy dancers were shadowed by a transparent counterpart hastily swept under the noisy blue background. “Did he make a mistake?” I asked. My grandfather’s reply was quick and definitive: “Matisse never makes mistakes.”

My initial read of the not-so-hidden dancers as mistakes agreed with the etymology of the painterly term. On the other hand, my grandfather’s response rested on his conviction that everything on the surface of Nasturtiums was meant to be seen. To be sure, Matisse embodied a modernist ecstasy in deliberately revealing the doing in the done. He had nothing to hide. The bare madeness of his surfaces, their facture, nullified the static categories of “right” and “wrong.”

A few years ago, at the Metropolitan Museum in New York, I saw an exhibition titled “Matisse: In Search of True Painting.” This staggering show foregrounded the artist’s most densely readjusted paintings, and was organized under the rubric of a search—with “true painting” as the moralizing payoff. Maybe this propensity to make things linear, to reduce them to absolutes, is an American trait. It’s probably the immigrant in me that always identifies more with inquiry than with declaration. The “pursuit of happiness” was paralleled, in the century of the self, by the sermons of Abstract Expressionism: pentimenti-free promises of transcendence, purity, or the sublime, glowing at the end of the tunnel.

A similar logic must have guided the curators at the Met. But I find their title misleading. It was based on an excerpt from a letter Matisse wrote to his wife from Nice in 1919. In it, he describes with excitement a potentially new chapter in his work: “As for telling you what it will be like . . . That I couldn’t say since it hasn’t happened yet. But my idea is to push further and deeper into true painting.” Matisse didn’t locate himself outside true painting. He saw his struggle—his push—inside it all along.

The willing embrace of pentimenti had a precedent in Leonardo da Vinci, who frequently left behind seemingly superfluous lines and stains. He allowed many of his drawings and paintings to remain in a state of flux and implored fellow painters to do the same: “compose the parts of your figures arbitrarily . . . attend first to the movements representative of mental attitudes . . . rather than to beauty and goodness of the parts of their bodies.” Some of his drawings grew so dense that they began to resemble hairballs. Balzac later conjured this approach in his tale “The Unknown Masterpiece.” Frenhofer, a master painter, spends ten years in pursuit of an ideal portrait, his efforts culminating in a patchwork of swirled colors with a foot as the one recognizable element. Picasso, who deeply identified with Frenhofer, famously proclaimed: “Unfinished, a picture remains alive, dangerous. A finished work is a dead work, killed.”

Pentimenti mark this atavistic painterly appetite for revision. They evidence the finished painting in its undoing, as concealment measured against display, or, as my friend and fellow painter Allison Katz recently put it, “belief and doubt sharing the same plane.” I find a thrill in this simultaneity, but it’s also a way to deal. Every time I begin a painting, I take my chances, vaguely counting on an eventual alignment of error and intent that I can’t foresee or ever ascertain. The longer I’m at it, the more pleasure I derive from allowing the pentimenti to accrue until the painting in front of me becomes exotic and ambivalent.

Lately, with Picasso’s maxim ringing in my head, I’ve come into the habit of destroying paintings at the very last minute, reshuffling monthlong struggles into fragmentations that begin to feel primary and immediate. The different parts reassemble into a whole that appears both cogent and scattered. Perhaps the object born out of endless hiccups, splinters, and false starts allows us to momentarily piece something together out of the pervading sense of triviality in the everyday. In the words of Picasso’s friend, the poet Francis Ponge: “We look very closely at the pebble in order not to see the rest.”