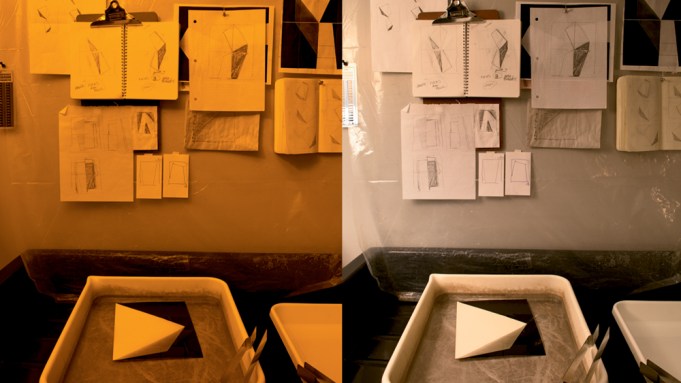 WATCHING a photographic image appear in a developer tray during my first black-and-white photography class in 1970 in Banff, Alberta, transformed my future. I was seventeen years old and farther from my family home in Florida than I had ever been on my own. At the heart of the photography course was a large group darkroom, with a maze of black walls to keep light from reaching the interior. Red safelights were used inside, since photographic paper is not sensitive to that wavelength. I had stepped into a world of night for day.

Other darkrooms followed in succession through college and decades of photography jobs. When I was at the Rochester Institute of Technology, in upstate New York, many apartments in the neighborhood of the George Eastman Museum included a room dedicated to printing black-and-white photographs. They’d have an enlarger and a table draped with plastic to catch chemicals. In Montreal I made a darkroom in my apartment with a staple gun and a roll of rubbery black vinyl. The area was directly above a restaurant’s refrigeration system. To avoid vibrations of the enlarger while making an exposure, I had to wait for the compressor to shut off every fifteen minutes. I have processed papers at the photograph conservation darkroom at the Metropolitan Museum of Art in New York and in countless bathrooms with towels stuffed under doors. Each darkroom has a distinct character, and it is fun to see how photographers solve common problems in their own ways. Having moved so many times, I don’t have a strong sense of belonging to a geographic place, but any darkroom feels like home.

MY WORK WITH old photographic papers began in 2007 with a box of Kodak Kodabromide E3, stamped with an expiration date of May 1946. It came as an unexpected gift from an eBay seller who added it to my purchase of outdated sheet film. The first print I developed, straight from the package with no exposure to light, looked as if someone had rubbed graphite across the surface of a textured piece of white paper, not unlike a Vija Celmins drawing. Age had degraded the emulsion, giving the print a distinct pattern. I had stumbled upon a way to capture substantial imagery made by the passage of time and to record the deterioration of a manufactured product.

The prints I process often serendipitously resemble the work of other artists on a different scale. A tiny moldy sheet of paper looks like a Jackson Pollock painting. A light leak creates a gradation recalling a Mark Rothko canvas. Silver mirroring on a century-old sheet of photo paper looks like a Liz Deschenes piece. Frequently, I find geometric shapes in my expired-paper prints that remind me of photograms by László Moholy-Nagy. In other bodies of work, I selectively develop sections of a sheet, creating the illusion of volume with black lines and tonal areas. A grid of twenty abstract graphite drawings by Tony Smith, shown in a solo exhibition at Matthew Marks in 2008, led me to a series in which I brought together four prints on a board with a small gap between them. His adjacent pieces had suggested the continuation of imagery.

In Ellsworth Kelly‘s small collages from the 1950s, I saw the beauty of a simple black placed next to a creamy white, and it reinforced my feeling that photographic tonalities can stand alone as imagery. The variation in blacks and whites that early photo papers produce is extraordinary. The beauty of maximum-density darks and minimum-density whites from 1930s papers is striking in particular. My series “Most and Last” consists of diptychs presenting the darkest shadows and cleanest highlights that different papers were capable of rendering. In the late 1890s, Johan August Strindberg made his “Celestographs” by putting light-sensitized glass plates in a tray of developer and exposing them to the starry sky. Papers manufactured in the late 1890s that I have processed resulted in images that are startlingly like his.

The old materials I use surprise me, and I’ve learned to pay close attention to them. Responding to the results in my developer tray, I wonder if digital photographers have an equivalent experience. Now that gelatin silver materials and processes have been largely replaced by digital technology, my practical knowledge of twentieth-century photography is a resource for twenty-first-century photographers.

Darkroom work is slow and solitary. The privacy in my current lab in the far corner of a basement allows me to think without interruption. The room is painted a soothing medium gray from a Kodak test patch. I don’t bring a phone, and I can’t hear anything on the other side of the door. Moving in the space with just a safelight is second nature. In the darkroom, I am confident in my actions, one thing leads to another, and chance is welcome. My entire photographic experience is at my fingertips in there. What more could I ask of a room?

ALISON ROSSITER is an artist living in New Jersey.