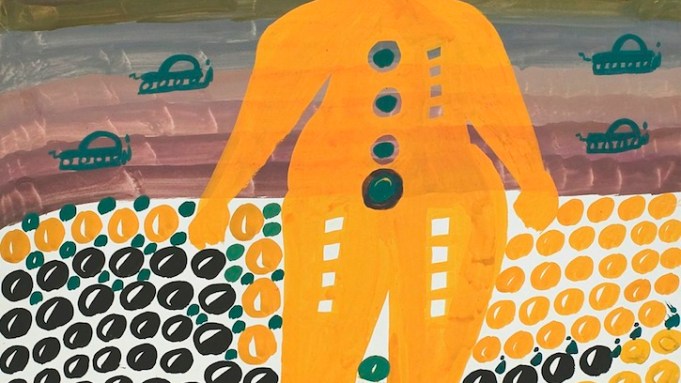 Carlo Zinelli, an Italian artist who grew up a mere 70 miles from Venice, may be one of the unanticipated stars of this year’s Biennale. Little known outside of Europe, Zinelli (1916-1974) will have his Venice debut thanks to the Museum of Everything (MoE), a peripatetic, London-based museum founded by James Brett in 2009. Brett, a prolific collector and curator of work by untrained and undiscovered artists, is bringing 100 of Zinelli’s colorful graphic gouaches to the Serra dei Giardini, a former greenhouse a few minutes from one of the Biennale’s main exhibitions spaces, the Giardini. “Il Palazzo di Everything” will be on view for at least the first two months of the Biennale, which opens June 1.

The MoE’s Zinelli show is a good fit for the Biennale, whose artistic director, Massimiliano Gioni, has a long-standing interest in “outsider” art (a term Brett, for his part, shuns). The title of Gioni’s exhibition, “The Encyclopedic Palace,” is based on an 11-foot-tall architectural model of a building that would, its designer hoped, house evidence of the world’s cultural and technological achievements. (Marino Auriti, the Palace’s Italian-American inventor, was an auto mechanic who died in 1980. The Palace is in the collection of New York’s American Folk Art Museum.) Gioni’s show, at the Arsenale and the Central Pavilion, includes work by over a dozen self-taught artists, and he selected American artist Morton Bartlett (1909-1992), one of the better-known “outsiders,” for the Gwangju Biennale he curated in 2010.

Last week A.i.A. spoke with Brett by phone about his plans to showcase Zinelli in Venice. He’d just returned to London from a trip to Moscow, where he traveled for the opening of the MoE’s exhibition of work by contemporary self-taught Russian artists.

Zinelli was conscripted into the army as a young man, and ended up on the front lines of the Spanish Civil War. “He quickly became unbalanced,” Brett explained. “He left after a few months, spending time in various Italian hospitals, and he eventually stopped talking.” Two local sculptors, Michael Noble and Pino Castagna, heard that Zinelli had been scribbling all over the walls and floors of a psychiatric hospital in Verona. In the mid-1950s, they set up a studio for him, and he began painting and drawing for 8 or 10 hours a day, a schedule he kept up for the next 15 years.

Most of Zinelli’s paintings feature a combination of figuration and his particular style of illegible text. “There are lots of animals, like birds and goats, and also bullet-riddled horses, guns, artillery and occasional explosions. And in the middle there will be scrawls of nonsensical text, almost like concrete poetry.” Brett believes that Zinelli could hear himself trying to communicate, knew it wasn’t intelligible, and tried to reproduce that language in his art.

Jean Dubuffet, the French artist who coined the term “art brut,” and the writer André Breton heard Zinelli’s story and visited his hospital/studio in Verona in the mid-’60s. According to Brett, Dubuffet was skeptical, finding Zinelli’s work “too sophisticated”; Breton, on the other hand, considered him a genius. Art brut galleries in Europe started selling his work in the ’70s. “He entered that circle and never really left,” Brett said.

“Il Palazzo di Everything” will also include a library and a café, where Brett plans to host a “Salon of Everything.” Instead of organizing a public series of talks, Brett’s salon will be more spontaneous, addressing what has become his cause célèbre: the ghettoization of “outsider” artists and his attempt to “reclaim the title of ‘artist’ as a basic human right.”

Brett reports that he has a “soft yes” from most of the two dozen people he invited to participate, among them artists Cindy Sherman and Christian Boltanski, curators Gioni and Jean-Hubert Martin (who organized the celebrated “Magiciens de la Terre” exhibition at Paris’s Pompidou Center in 1989), and New York-based critics Jerry Saltz (New York magazine) and Roberta Smith (New York Times).

The plan, for now, is to announce each morning who will be holding court in the MoE café on that particular day. The BBC will be on hand during the first two weeks of the salon to film the free-form discussions; depending on how quickly the videos can be edited, Brett hopes to host screenings at locations throughout Venice. “The salon is about thinking, not performing,” he explains. “I want it to happen in the moment.”