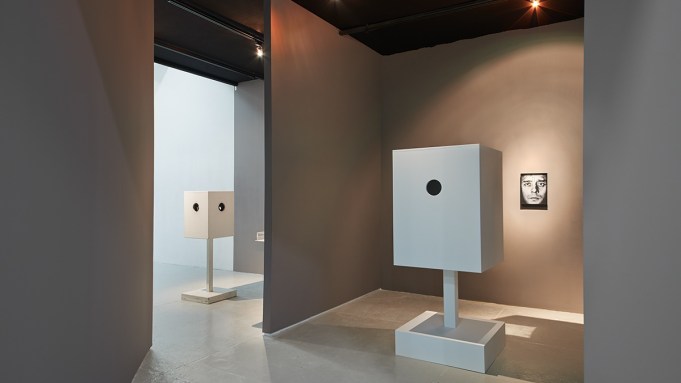 I’m sitting naked inside an Yves Klein artwork; it’s a wooden box fitted with holes into which disembodied hands reach, touching my flesh.

Klein conceived Tactile Sculpture in 1957, but before this month, it had never been executed with a live person inside, neither before Klein’s untimely death from a heart attack five years later, at the age of 34, nor since.

That was the come-on issued by attendants (hired hands for the occasion) to visitors at New York dealer Dominique Lévy’s booth at the art fair-cum-exhibition Independent Projects, earlier this month. The booth, devoted to Klein, featured a video, a photographic portrait by Shunk & Kender and a small painting on the wall in Klein’s trademark International Klein Blue, tagged at just over $3 million. But the centerpiece was Tactile Sculpture.

“We invite you to experience the sculpture by reaching into the box,” the attendants said. “We only ask that you not look inside.” That would have been hard to do; a tube of black fabric, like a sleeve, was taped to the box inside each of the holes.

Reaching in, visitors felt . . . something. They often weren’t sure what. Some of them realized that it was a naked human being—warm, sometimes hairy, either soft or hard depending on what part they touched. The second time I reached in, the person inside grabbed my hand, leaving no doubt. “The point,” Klein wrote in a 1957 journal entry on view in the booth, “was simply to place living sculptures in these boxes—beautiful nude models, with generous curves, of course.” I don’t have the curves, but I couldn’t get over my curiosity about what it would be like to be on the other side of the experience. The gallery jumped at my offer.

In forcing unexpected physical contact on those who experience it, the piece is daring, even for a showman and provocateur like Klein. The artist himself acknowledged in the same journal entry that the piece was too racy for the ’50s, even in France: “It was a little premature at the time. I would have had the police on my back right away.”

I showed up at two p.m., ready to mount up. I changed in an office upstairs and walked downstairs in my T-shirt, also wearing flip-flops and wraparound skirt borrowed from the previous occupant. Natasha Rosenblatt, the attendant that day, opened the door; I hid behind it as I stripped, and I climbed into the box, the bottom of which was about three feet off the floor. I’m five foot ten; the box is just over three feet high, large enough so that I was not overly cramped when sitting cross-legged inside.

I was nervous, but I couldn’t pass up the opportunity to be part of art history. And as a writer, I was eager to describe an experience some people wouldn’t undertake if you paid them to do it. And what writer doesn’t love attention?

I usually had a warning when someone was approaching, as I was able to hear the attendant conveying instructions or fielding questions. It quickly became warm inside, despite a hole in the top of the box that let in air and light, so that I could clearly see visitors’ hands reaching in. One performer told me that by funneling his exhalations out of that hole via his hands, he could draw fresh air in the side holes. It didn’t seem to work for me.

I didn’t have to wait long for my first customers. An elderly couple, with shaky voices but speaking loudly so they could hear each other, approached moments after the attendant closed the door behind me. She reached in from the left, he from my right. They touched my arms and hands. “Dorothy, can you feel me? I’m pinching you!” he said. They managed to find each other’s hands, but were also touching me without realizing it was a ménage-a-trois. It was hard to keep from laughing.

Not long afterward, a man reached in from my right. He held his hand completely still, as if waiting for something to happen. I gently brought the back of my right hand up to his palm. He didn’t react. I interwove my fingers with his and curled them downward, so we were clasping hands, and remained that way for several seconds. “Aw,” said Rosenblatt later. “You had a moment.”

Shortly after that, a woman’s hand came in. The letters L-O-V-E were tattooed on her knuckles. She reached in gingerly, slowly, evidently nervous (most women were tentative, many men bold). She jumped when she first touched me, but then bravely explored further, moving her hand along my arm to my hand.

Can’t she tell what she’s touching, I thought? Contact with other bodies is so familiar. Is being deprived of sight really so disorienting? How can they not figure it out?

“Love” was exploring the back of my hand, gently pinching her fingers as if zooming out on an image on a touch screen. I had been entirely still in the minute or so that she had been exploring. When I moved my hand ever so slightly, she shrieked and withdrew, never to return.

“Ew!” exclaimed one visitor. “That’s so creepy!” Did I really feel that gross? We’re all subject to insecurities about our bodies—are we big enough? Small enough? Too hairy? Fit or flabby? Being touched, even when the visitors didn’t know what they were touching, inevitably brought such worries to the fore.

When the attendant asked at 30 minutes if I wanted to get out, it felt like just 10 minutes or so had passed. Even after an hour and despite mild discomfort, it had felt like half that. One spends one’s time in the box in a constant state of anticipation. When will another hand reach in? How long will I sit here alone? Trying to remain calm during the longer stretches, I engaged in a simple exercise of meditation I’d learned at a retreat, focusing on the sensation of my breath entering and exiting my nose.

One visitor got especially comfortable. After scanning my hand, arm, shoulder and the back of my stubbly head, he quickly determined what was inside and confirmed it with Rosenblatt. Resting a hand on my shoulder like an old friend, he had some questions for her, asking whether the work was for sale and inquiring about those who took turns inside. Rosenblatt explained that the estate would be open to inquiries from museums to license the piece for re-enactments. Jesting, he asked whether, if a museum did purchase the piece, the performer would be included. It was mildly ironic to have such an experiential piece installed in an art fair, an occasion primarily intended to provide a place to shop for art.

About me, he asked, “Male or female?” and immediately grabbed my chest, where he got his answer. Rosenblatt reported that a female performer was similarly groped, though unintentionally, resulting in a mortified apology from the unwitting groper, who came back for that purpose when the performer’s shift was over. A male performer, according to Rosenblatt, had his genitals grabbed by an especially aggressive visitor (who must, by the way, have reached in up to his shoulder).

The sculpture’s echo of glory holes is unavoidable; the folds of the fabric sleeves echo vaginal folds, Rosenblatt pointed out. It’s awkward to confess that for the performer, there’s a deeply sensual, if not sexual, element. Hands are more or less attractive, and depending on your preferences, you might like to be touched by some of them more than others. At one point in the second half of my stay chez Klein, I thought it would be only fair to be as blind as those touching me. When I closed my eyes, contact from their roving hands was markedly more pleasant and less complicated, I suppose because I wasn’t assessing whether I wanted them to touch me.

Other, non-sexual associations come to mind as well, especially when you spend an hour folded up inside. Restricted spaces can be used as instruments of torture, for example on prisoners or terrorism suspects in solitary confinement. More benignly, there’s the womb.

The staging of Tactile Sculpture adds a new page to Yves Klein’s history. His art, on one hand, staked out claims of total dematerialization: his 1958 show known as “The Void,” at Paris’s Iris Clert Gallery, “consisted of nothing more than the gallery’s freshly painted walls,” as Pepe Karmel put it in A.i.A. in 2010. Karmel also points out that the show’s actual title was “The Specialization of Sensibility in the Raw Material State of Stabilized Pictorial Sensibility.”

In 1962, Klein sold what he called “Zones Of Immaterial Pictorial Sensibility”: collectors paid in gold leaf, which Klein crumpled and threw in the Seine; the buyer burned his receipt. (This was all, by the way, well before the period studied in critic Lucy Lippard’s seminal book Six Years: The Dematerialization of the Art Object from 1966 to 1972.)

Other Klein works engaged in a raw physicality. His performances in which naked women had their bodies smeared with paint and then pressed themselves against canvases are legendary. Another profoundly sensory work was his 1949 Monotone Silence Symphony, a 40-minute composition consisting of a single note held for 20 minutes, followed by silence for an equal period. I was there, enraptured, when Lévy staged a performance of the piece last year. (Lévy represents Klein’s estate; the gallery’s Begum Yasar organized the presentation at Independent in collaboration with Daniel Moquay, director of the Yves Klein archives.)

Some artists have staged projects in which they put their own bodies on the line. For her 1964 Cut Piece, Yoko Ono sat onstage and invited viewers to cut away her clothing, one snip at a time, with a pair of scissors that was provided. In 1974, Marina Abramovic performed Rhythm 0, which involved sitting behind a table furnished with 72 objects that the public could use on the artist, ranging from a rose to a gun and a single bullet. Klein, for his part, per the journal entry, planned to subject only curvy women to groping hands; for Independent, Lévy drafted both male and female performers.

Those interacting with me at Lévy’s booth were generally less aggressive than those touching Abramovic and Ono. “I’m sorry for my cold hands,” one woman thoughtfully whispered.

After encounters with perhaps two dozen people during a stay of 70 minutes—and believe me, I could have remained longer—Rosenblatt opened the door for me. Cool air rushed in. I was birthed from Klein’s womb, and I got dressed, hiding behind the open door.

Four middle-aged women who had just experienced the piece had hung around. One of them pointed out that we’d just been touching each other. I couldn’t resist: “Was it good for you?”

The gallery says that no prospective buyers showed up during the fair, but Lévy is open to inquiries. No price has been set, and the author is not included with purchase.