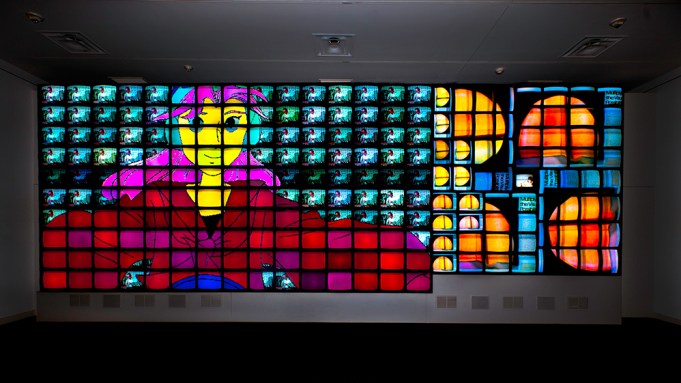 Standing behind the 1986 video sculpture Family of Robot: Hi-Tech Baby, Associate curator Michael Mansfield turns it on from his smartphone. It’s one of the robots in the exhibition “Nam June Paik: Global Visionary,” open through Aug. 11 at Washington’s  Smithsonian American Art Museum. The museum manages electronic artworks with software on its central server. After logging into the server with a virtual network computing (VNC) app on his phone, Mansfield can operate and monitor every work on display in the exhibit: whenever, from wherever. “We don’t want a hiccup while they’re on view,” he says.

The approach to operating and monitoring the premiere exhibit from the Nam June Paik Archive would likely tickle Paik, a musician sometimes affiliated with Fluxus who became the so-called father of video art. Though he is likely best known for massive video walls like Electronic Superhighway, 1995, and Megatron/Matrix, 1995, Paik worked with satellites and film, and co-invented a video synthesizer. Turning on the artwork with a telephone is apropos for an artist who worked more fluidly across disciplines than any other artist in the 20th century. On the surface, the exhibition reveals his technological prowess and breadth, but also the enduring problems of exhibiting now-obsolete technologies.

“The video walls are needy children that require a lot of care,” Smithsonian American Art Museum’s director, Elizabeth Broun observed. In 2002, the museum acquired Paik’s Electronic Superhighway, a 47-channel video wall featuring endless clichés of Americana, with each state outlined in neon. Its components arrived to the museum in a box: most of its neon was broken, and its 313 televisions were missing. Restoring Electronic Superhighway a decade ago let museum staff cut their teeth, but the retrospective was a much bigger challenge.

Installing “Global Visionary” gave the staff an opportunity to immerse itself in the inner-workings of its cornerstone Paik piece, Megatron/Matrix, an eight-channel, 215-screen video wall acquired by the museum in 1998. In preparation for the archive exhibit, American Art unplugged Megatron for some refurbishing. They installed a wire chase to organize and support the weight of the hundreds of wires cascading from the Korean televisions and voltage converters. “TVs have two stresses. Heating and cooling is a physical stress, causing solder joints to weaken and break,” Mansfield explained as he pointed to fans installed to relieve the heat stress. “And there is a chemical stress if the TV is on for a long time.” Cathode ray tubes (CRT)—the medium of many of Paik’s works—have a finite life. With the advent of LCD technology, CRTs are growing scarce.

That issue of restoration and preservation is a concern for preserving Paik’s Estate Archive. “We have a lot of TVs to maintain a lot of that work,” said senior curator of film and media John G. Hanhardt. “Ultimately someone may come up with a way to fabricate them so they remain viable as a material.”

Hanhardt first met Paik in the 1970s, and was responsible for organizing retrospectives of Paik’s work at the Whitney in 1982 and at the Guggenheim in 2000. A self-described purist, Hanhardt cherishes the fine difference between film and video, but if a new means of producing cathode ray tubes is not developed, he knows that the museum will have to consider other options for displaying video art.

According to Hanhardt, Paik didn’t want to limit his work to cathode ray tubes, but envisioned his work on flat screens and in various kinds of projected formats. “That’s a quality as a Fluxus artist: believing in change, morphing and moving and not being the same,” Hanhardt said. “He was very pragmatic,” he added. Paik would ask, “What’s the best way to keep things alive and relevant, and to keep things working?”

Rehabilitation of Megatron/Matrix taught valuable lessons applicable to other works, like Family of Robot: Hi-Tech Baby, a sculpture of 13 televisions organized to look like a small child. Last exhibited in 2001, several of Baby’s TVs had stopped working. With the work on loan from The Art Institute of Chicago, Mansfield advised AIC conservation staff over the course of several months on changes to make to the sculpture. Reworked electronics and power boards wouldn’t fit into the sets. As a result they were moved into the base.

After Mansfield swiped his finger across his iPhone screen, Family of Robot: High Tech Baby‘s fans began whirring. Screens flickered: first four commercial sets, which display a hi-quality image, then the remaining consumer-grade televisions power up. Eventually the video, processed through a video distribution amplifier, plays on all 13 televisions. Even the video has undergone format changes, migrating from VHS to DVD, and eventually to a ProRes QuickTime file. These are amongst the problems Mansfield has been troubleshooting.

The Smithsonian was awarded the Paik Estate Archive early in 2009, and it arrived shortly thereafter, delivered by seven tractor-trailers. Mansfield, Hanhardt, and the estate’s curator Jon Huffman have been digging through boxes ever since.

“It came in great disorder,” Hanhardt remembered. “Which makes it all the more complicated. It is not like his space was perfectly organized.” (Paik had several studio spaces in New York city.) Hanhardt characterized Paik as a bricoleur, traveling the world collecting things. “I think the archive is like a huge memory machine.  A wunderkammer-a wonder cabinet of his life.”

Looking at a wall of objects in the exhibit is enough to give that impression: a bust of Elvis, an old radio, a cardboard cutout of the state of Louisiana. His interests were vast, and each item had the potential of finding its way into a future piece. Even on a small scale, the variety of bric-a-brac included in the exhibit suggests that unpacking seven truckloads of archive material must have felt like an episode of “Hoarders.”

The vast interests are likely an extension of Paik’s life experience. The Korean born artist fled his home country in 1950, during the Korean War. He studied Western Modernism and composition at the University of Tokyo, writing his thesis on Arnold Schoenberg before moving to Germany in 1956. In Germany he was exposed to Karlheinz Stockhausen, who worked with tape recorders, computers and synthesizers. He also met and worked with John Cage, George Maciunas, Joseph Beuys, and Merce Cunningham.

These varied influences affected Paik’s early performances. In some he dragged and smashed violins. In others he destroyed pianos with an axe. “He loved the piano and the keyboard,” Hanhardt said. “But he felt we need to break the proscenium stage.” And break it he did, finding the notes an instrument makes between splinters.

Breaking was eventually applied to contemporary audio equipment. In 1963 Paik created Random Access by dismantling a reel-to-reel tape recorder, placing the audio-head on a wand, and gluing the audio-tape to the wall. Anyone could scrub the audio-head against the tape and hear the scratching tones of white and pink noise amplified through its speakers. An alternative version of Random Access, a record player nicknamed Schallplatten-Schaschlik, or Shish Kebab (1963/1979), spaced a dozen records vertically on an extended spindle, and audiences could move the play-arm at random between records of Bach, Beatles, and Caterina Valentine.

Tinkering naturally extended to televisions. The exhibition displays three works entitled TV Crown (1965/1999). Beneath each TV are two audio generators that the TV electronics reinterpret as light. The light bends with the audio wave, sometimes fluttering like a butterfly or spinning like a disc. Mansfield demonstrated how the piece works, turning the audio generator’s dials. As he did, the crown oscillated faster and slower. The Crowns were once participatory, but not any more. The components are now secured behind glass during the run of the exhibit; they’re no longer commercially manufactured.

Tinkering led to invention. In 1969, Paik collaborated with artist and engineer Shoya Abe and created the Paik/Abe Video Synthesizer. The pioneering tool added channels of red, green, blue, cyan, magenta and yellow to broadcast images. By today’s standards, the results look like crude Photoshop, which is impressive since the synthesizer was invented 20 years before such software existed.

The synthesizer also aided Paik’s ongoing collaboration with classical cellist Charlotte Moorman. Paik and Moorman met and began collaborating shortly after he immigrated to the U.S. in 1964. During performances, the synthesizer let Moorman manipulate video on two of the works currently on display in the exhibit: TV Cello (1971), a stack of stringed televisions resembling a cello, and TV Bra for Living Sculpture (1969), two small televisions that were strapped to Moorman’s breasts. She could even drag a bow across TV Cello, creating sounds similar to a boat’s hull scraping an ice floe.

“The connections between music, composition and performance are integral. They are all time-based media,” explained Hanhardt.  “[Paik had] to break the notion of a score of notes. It could be a performance of a score of instructions. It takes Duchamp’s notion of the found object, moves through Cage into sound, into a whole panoply of notions of art.”

Technology as art was one notion, and it might explain Paik’s push to humanize it. His robots anthropomorphized the TV. TV Bra gave television some sexuality. His participatory works forced engagement rather than passivity—dialog rather than lecture. On an untitled serigraph depicting his TV Chair, printed in 1973, from the portfolio The New York Collection, Paik questioned how soon in the future video would be in homes and museums, artists would have their own TV channels, and people would watch TV on flat screens. Forty years later his visions are reality.

He also envisioned ways technology would connect people. Hanhardt points to Paik’s 1968 essay, “Expanded Education for the Paper-Less Society,” where the artist hypothesized a day when students would want to study instruments from Japan, Afghanistan and Persia via The Mailable Television, which basically amounted to video-taped instructions mailed anywhere around the globe. “He’s talking about what we talk about now!” Hanhardt exclaims. “Live learning through the Internet.”