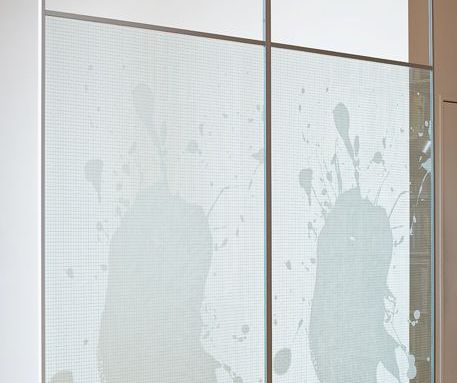 In his second solo exhibition at Clifton Benevento in New York, Brooklyn-based artist Ned Vena applies a singular painterly gesture to multiple unique works. “To make two separate paintings from one gesture was an attempt to embrace the feeling that I was making the same painting over and over again,” Vena told A.i.A of his work, which varies in color and materials, but is always ruled by the grid. “I wanted to diffuse the unique and singular results of the individual works and create two objects from an individual process.”

The self-titled show consists of two related series. The first comprises large violet paintings, created by stretching two canvases over the same support, flooding them with violet Garvey ink—commercially sold to fill price markers at supermarkets, and frequently used by graffiti artists—and then separating them on two different stretchers. The paintings on the back wall are also ruled by V-shaped grids reminiscent of Frank Stella’s “Black Paintings,” a series referenced in many of Vena’s earlier works. These works were wrought using vinyl stencils applied to the top canvas and flooded with pigment. After the ink dried, Vena peeled off the stencil, but allowed some of the stubborn material to remain.

These violet paintings look related, but not identical. On the left wall, the canvases have a textural quality, a deeply pigmented surface made tactile by the remnants of the acrylic. On the right wall, their fraternal twins look like silk screens, shallow and flat. “I’ve always wondered what the reverse of a Morris Louis painting might look like,” he mused.

The show also includes sculptures made from acid-etched security glass panels. Vena’s recurring grids appear in the wire mesh embedded into the glass. Standing at the entrance like gatekeepers and covered in large amoebic blotches, the transparent sculptures recall Warhol’s Rorschach paintings. They are created by throwing an acid mixture at one panel, and pressing another sheet of glass on top of it, and separating them once the acid has eaten through the surface. The resulting screens obstruct views of the gorgeous, expansive canvasses hanging on the wall behind them. “I wanted people to have to sneak around the glass carefully, like fitting through a hole in a fence,” Vena says. “To create an obstacle through which the viewer initially sees the paintings.”