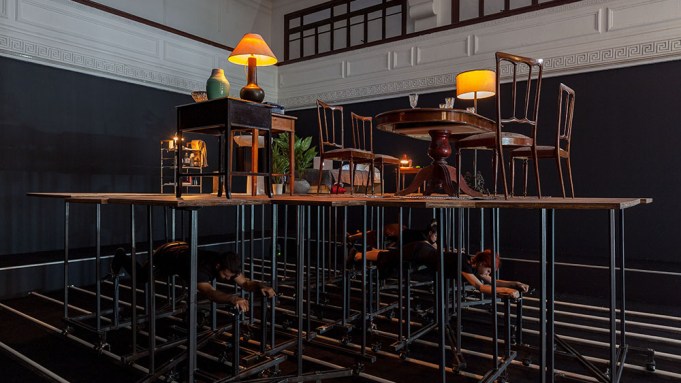 “Is a good neighbor someone who lives the same way as you?” “Is a good neighbor a stranger you don’t fear?” These are two of the forty questions posed by Elmgreen & Dragset, the Berlin-based Scandinavian artist duo, in their curatorial statement for the current edition of the Istanbul Biennial, on view through November 12. The ideas behind Elmgreen & Dragset’s “a good neighbour” are worthy of scrutiny, given that population displacement in 2016 was the highest ever recorded by the UN Refugee Agency, with nearly sixty-eight million people leaving their homes worldwide. But figures this large make it hard to imagine the impact that social destruction and reformulation have on the individual—a task more suited to art than statistics.

Fifty-six artists are exhibiting works across six venues in central Istanbul, with thirty new commissions supported by the IKSV, the local nonprofit that founded the biennial in 1987. The show is anchored by key historical works that point to the vulnerability and violence latent in spaces of intimacy and co-habitation. The dark humor of Lee Miller’s 1945 photographs of Hitler’s apartment is particularly unsettling in light of the new nationalist groups gaining strength around the world. In one, an absurdly placed photo of the Führer sits beside Miller as she bathes in his tub, her boots blackening the bathmat in the foreground. Louise Bourgeois’s photogravure Femme Maison (1990) depicts a woman with a house for a head. Using the French term for “housewife” as a title, Bourgeois worked with this motif repeatedly to tease out the oppressive ways women are overidentified with the home. Turkish artist CandeÄ?er Furtun’s untitled sculptural installation from 1994–96 features nine pairs of identical ceramic legs seated along a tiled bench that evokes a bathhouse. The widely spread masculine legs suggest a critique of male social dominance and sexual authority.

Colombia-born artist Pedro Gómez-Egaña’s Domain of Things (2017) exemplifies an undertone of anxiety running through the biennial. Home furnishings are roughly arranged into a dining room, bedroom, and other areas atop a segmented platform raised on five-foot stilts. Performers positioned underneath slowly shift the sections. The attempt to maintain domestic normalcy on unsteady ground reflects the mood of coexisting with upheaval, the reality in Istanbul and cities all over the world.

The coup attempt of last summer, allegedly organized by religious leader Fethullah Gülen, and the subsequent escalations of President Recep Tayyip ErdoÄ?an’s authority have undermined democracy in Turkey since plans for this biennial got underway. When I landed in Istanbul, a trial was beginning for thirty journalists facing life sentences for links to Gülen. More than fifty thousand people, including civil servants, academics, military, and judiciary officials, have been jailed, and three times that many have lost their jobs for political reasons in the past year. The curators’ optimism seems naïve in this climate, but many of the works dig into the uncertainty of community relations and the fear of hidden threats nearby while also leaving room to contemplate alternative ways of living in proximity.

Photographer Sim Chi Yin looks at the relationship of migrant workers to their underground homes in Beijing’s former Cold War bomb shelters. The Rat Tribe (2011–14), her twelve-photo series, presents intimate moments of quotidian life for these roughly one million new city dwellers. She captures young people in rooms only a few feet wide, walls decorated with posters, clothes zipped into plastic closets or heaped in overflowing suitcases. Yin’s subjects seem to embrace with dignity the only housing they can afford.

Kurdish artist Erkan Özgen offers the most intense four minutes of the biennial with the ironically titled film Wonderland (2016). A deaf Syrian boy describes his hardships through impassioned gestures, twisting his small body to mime people being handcuffed, blindfolded, and shot. This boy’s painful experience is a common one in Turkey, with three million Syrian refugees—half of whom are children—in the process of settling there.

American artist Fred Wilson, known for works that point to violence and erasure in institutional narratives, contributes Afro Kismet (2017), an installation that considers representation of Afro-Turks in the history of the Ottoman Empire. Two large walls of decorative tiles spell out black is beautiful and mother africa in Arabic calligraphy. Among the other objects on display are borrowed historical paintings and prints in which Wilson has highlighted black characters—soldiers, musicians, and slaves—in the background, by reproducing and enlarging sections of the paintings, or covering prints with a layer of transparent vellum and cutting holes to encircle certain figures.

The civic responsibilities embodied by the figure of the good neighbor are particularly important now. Disputes over public space and land use sparked the 2013 Gezi Park Protests, and later that year the Istanbul Biennial provoked criticism for its gentrifying effects. An ongoing public program series organized by Turkish artist Zeyno Pekünlü offered some tangible answers to the biennial’s many questions. On September 19, Istanbul’s Neighborhoods Association hosted a clamorous meeting in which representatives of various groups gave brief histories of the issues facing their areas. There was also a presentation of a three-hundred-word dictionary. Created through a collaborative process with architects, planners, and social scientists, it includes legal terms as well as colloquial and made-up phrases used by members of these neighborhood groups in their struggles against harmful urban policies.

Although many artists have left Istanbul in the past few years, the ones who remain are finding new ways to cooperate. The works in the exhibition embody this resourceful spirit. Traumas are still fresh in Istanbul, but the biennial’s response to fear is a hope for connectedness. After gun shots rang out near Taksim Square one afternoon as I sat in an artist’s studio, the first thing she did was call her neighbor.

First Look: Inside a $9.5 Million Condo at the Mandarin Oriental Residences in Beverly Hills