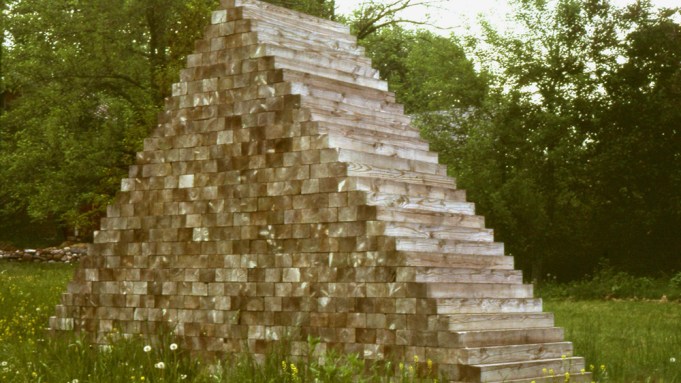 Dan Nadel wrote that Mimi Gross “is an artist who traverses the second half of the twentieth century with an ease that is hard to imagine today, when distinctions between artists and movements have been rigidly codified.” On October 28, Gross and Jackie Ferrara spoke at the Renee and Chaim Gross Foundation, located in the home of Gross’s late parents. The SoHo townhouse is full of the art of her sculptor father, as well as his collections of European, American, and African art. Both Gross and Ferrara lived and worked downtown in a fertile time but steered clear of art-world trends, carving out their own distinctive paths in the fringes. They shared anecdotes about their lives and their work, following a slideshow compiled by Sasha Davis, director of the Renee and Chaim Gross Foundation, featuring art, family snapshots, and pictures of their SoHo studios over the years. The event was part of the Downtown Culture Talks organized by the SoHo Arts Network. Highlights from their conversation are presented below.

SASHA DAVIS  We’re very happy to host today a talk between Jackie Ferrara and Mimi Gross. Jackie Ferrara is known for her sculpture work made of stacked wood. She’s also an accomplished draftswoman. Mimi Gross is an artist who works in variety of mediums: sculpture, painting, costume and set design. I wanted to discuss how you two became friends. I have two drawings that Mimi made in the ’50s when you were both traveling in Italy.

MIMI GROSS  We found each other in Florence as two Americans who didn’t know many other Americans or anybody else. We ended up hitchhiking together all over Italy and France . . .

JACKIE FERRARA  And Germany and Austria!

GROSS  These drawings are from that time. We used to hang out near Genoa, which at the time was much more provincial. There was an area near the port that had three or four amazing bars that were full of friendly prostitutes and sailors. We felt very at home there. I made a drawing of one of the bars for an Italian magazine’s special issue on prostitutes in 1959. It was my first publication.

FERRARA  A lot of the stuff in the photo is long gone. I was moving from my loft on Delancey and I had already started to make work on Prince Street. The factory had been unoccupied for at least ten years. The only thing that’s still there are the windows in the back.

DAVIS  And here’s a picture of you in your Prince Street studio in 1980. In the photo from 1972 we saw much different work. You were working with cotton batting. Here you’re working with wood.

FERRARA  When I lived on the Lower East Side there used to be a place on Greene Street that made the quilted blankets that they put around furniture when you move. Inside was this stuff, which I called cotton batting, but it was really a bunch of rags that had been pulverized. When you buy cotton batting it’s like a new piece of paper, but this stuff wasn’t like that. It was much softer. I would move it onto a cardboard shape, then use watered-down Elmer’s Glue to saturate it. It would get this gray color, a little bit like cement even though it wasn’t that at all. At some point I went from making things with dead birds and dead skulls to making things that were much more geometric-looking. I’d make shapes out of cardboard and cover them with what I called the cotton batting. I had to do a lot of strokes with the glue. It was very time-consuming. Around here in the neighborhood you could find wood, so I switched from cardboard to wood. Then one day, I was putting together pieces of wood and trying to figure out what I was going to make and I thought, “Why am I covering this with cotton batting?”

DAVIS  Here’s a picture of Metropolitan Lumber. It was hard for me to find historic pictures of lumberyards.

GROSS  We both went to this wood store. It’s one of those weird overlaps.

FERRARA  That’s where I got all my wood. The guy who owned it was Italian and because my last name is Ferrara he thought I was Italian. So he gave me lots of nice deals.

GROSS  I just remember you’d walk in and hear them cursing, and they’d say, “Sorry, lady.”

DAVIS  Here’s a more recent picture of your studio, with models.

FERRARA  The work is probably from ten years ago. For a long time I’ve been making big public art projects, but I started by making places in miniature, and eventually I got invited to make real places. The work here is work that I wouldn’t sell. I probably have about thirty pieces.

GROSS  Why didn’t you sell them?

FERRARA  I thought I might just want to remember some pieces, and I shouldn’t sell them. When I go out to dinner and I order a steak, which I like rare, I eat everything around it first, and by the time I get to the steak it’s kind of cold. But I’m saving the best part for last. And I think that’s what I was doing with some of the work-saving—what I thought was best for myself.

DAVIS  Your Stacked Pyramid at the Neuberger Museum at SUNY Purchase is one of your first public art commissions.

FERRARA  I was going to cover it with cotton batting. I don’t know what I was thinking.

GROSS  We were going to talk about the neighborhood and how it was a long time ago. It was very rough and ready on Mulberry Street. We were not too welcome there, until I got pregnant. Then people were excited about the baby. In the 1970s I made work along the West Side Highway, which was basically deserted from Battery Park to 14th Street. King Fisher’s Daughter and Friend was made in the landfill that resulted from the construction of the World Trade Center. It was surrounded by grass and ducks. It was a project for Art on the Beach, an initiative that lasted about ten years and involved performances as well as outdoor sculptures. This was made of gatorboard and acrylics, and it stayed just fine outside for the eight months that it was there.

DAVIS  You wanted to share photos of Dave’s Corner, a bar on Canal and Broadway.

GROSS  Everyone talks about the Mudd Club, but Dave’s had a good scene, too. Then it became touristic and then it closed—just like everything else. But right around the corner is the Mmuseumm. It’s a project by Alex Kalman, who has taken over an elevator shaft where he has different collections. You see it from the street through a slit in the elevator shaft door. It has been there for a couple of years, and he sold one of his installations to the Met. It’s in the corner of the American wing. And if you walk in the alley between White and Franklin street east of Broadway you’ll see the Mmuseumm.

FERRARA  How do you spell that?

GROSS  There are a lot of parallels. We were really good friends, but we had a hiatus of not seeing each other for years, after being close everyday friends. I knew Jackie had done a lot of public art. My first public commission was Ella Waving, in front of the mental hospital on Ward’s Island. You could see it from Manhattan if you drove on the FDR Drive. It was made completely out of recycled materials, like PVC pipes, and we were given a cement donation. It was all thrown in the garbage, in fact I saw it in the garbage, upside down. But at one point it was repaired and the Fire Academy nearby loaned us a cherry picker.

FERRARA  Did you get in the cherry picker?

GROSS  Yeah. It was really scary. Especially letting go to hold the brush. My only permanent public artwork is the Robert Venable Playground in East New York, Brooklyn, which means just about no one has been there, except the locals, which is excellent. There’s a shower that has dancing figures and colored terrazzo, 55 feet long, and it has these spouts with many different showers, and the top picture, which you can’t see too clearly, is one of about fifteen anatomical images made of steel. It’s a playground that took about twenty years to get made.

FERRARA  You got the commission twenty years before?

GROSS  I got the commission four years before. It’s a very poor neighborhood, so it took a while to get it together. It’s a triangle of three acres, and a policeman was shot at gunpoint on the corner, and they named the park after him. I did the tot area, there are also areas for adults and the elderly—it’s a very nice park.