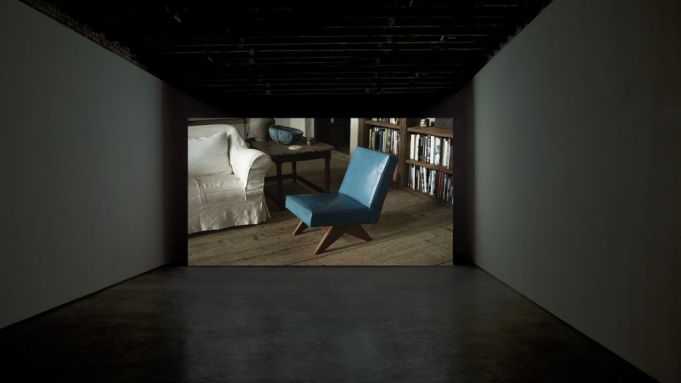 This show reflected on the unique position that nonprofit bookstore/publisher Printed Matter holds in the history of contemporary art in New York. The show presented a meticulously organized but all the same dizzying array of books, posters and editions that trace the evolution of downtown’s counter-culture and indicate the fruitful relationships Printed Matter has established with artists such as Vito Acconci, Louise Lawler and Lawrence Weiner, among many others. A show of this kind was long overdue, and it’s great to see Printed Matter’s storied history continuing to reach new audiences.

Shaw melds Pentecostal Christians, psychedelia and neurobiology in one of 2014’s most strangely brilliant videos. Shown on the big screen as part of the always amazing Migrating Forms festival, Quickeners depicts a group of immortal “Quantum Humans” who have rid themselves of the biological issues that faced the human beings who came before them, while living in sync with the Hive, a thinly veiled reference to cloud computing. Shaw masterfully collides past, present and future entities, producing a narrative that traces a link between spiritual devotion and digital progress.

After traveling to Barcelona, Hamburg, Rio de Janeiro and Paris, Xavier Le Roy’s “Retrospective” finally arrived in New York. Le Roy and his team of dancers brought new vitality to his choreography by reinventing some of his more established works. “Retrospective” proved that small gestures are capable of disrupting our coded movements in social settings. The performances collapsed the boundaries normally established between dancer and viewer, implicating the audience and prompting an intimate, engrossing exchange.

Sam Pulitzer, “A Colony for ‘Them,'” at Artists Space

Visual artist and writer Sam Pulitzer’s show made visitors slow down. Their motions were dictated by the physical installation of intricate texts commissioned for the labyrinthine display. Pultizer’s show brilliantly reflected upon viewers’ expectations of exhibition visiting.

“DISown—Not For Everyone,” at Red Bull Studios

“DISown” presented a one-of-a-kind retail experience. The Lizzie Fitch-designed space, which included a rock climbing wall (!), set the scene for a month-long examination of consumerism and taste. Standout items included Shanzhai Biennial‘s baby footwear and K-Hole’s Removable Logo Bag. A series of live performances and radio programming made “DISown” into a non-stop celebration that combined frenzy with cultural contemplation.

“Isa Genzken: Retrospective,” at the Museum of Modern Art

Although the show opened in 2013, Isa Genzken’s long-overdue stateside retrospective set the tone for the coming year. The exhibition was notable in its representation of Genzken’s unique kind of love for New York and its architecture. Her post-9/11 projects, on view in the show’s final gallery, demonstrated her ability to occupy the precarious space between fear and sentimentality.

“Amie Siegel: Provenance,” at the Metropolitan Museum of Art

Provenance is a stunning exploration of wealth, design culture, market values and global economies. It explores the life of furniture designed by Le Corbusier for his government complex in Chandigarh, India, which has left its original home and ended up furnishing homes all over the globe; the furniture that remains in India is seen stacked up in storage, disdained by government workers. Siegel thus represented these iconic items as both status symbols and rejects. In its slow reveal, the film acted on the medium itself with dynamic self-reflexivity.