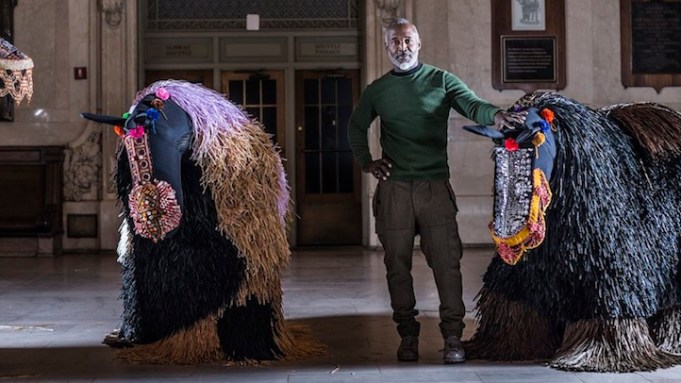 Nick Cave is into magic, and with the help of students from the Ailey School, he is doling it out at Grand Central Terminal twice a day all this week. “We don’t dream anymore,” Cave said to members of the press immediately before Monday’s debut performance of his new piece, HEARD•NY, which involves 30 dancing horses—Ailey students costumed in Cave’s signature “soundsuits.” “I want to bring us back to a place where we dream, and get out of our day-day-day rituals,” Cave said.

Cave, a sculptor, dancer, designer and professor (in the School of the Art Institute of Chicago’s fashion program), along with his collaborators, enjoyed a warm response Monday from crowds three-deep in Vanderbilt Hall. Heard attracted families with young children, tourists, commuters, students on spring break, and at least one celebrity (Michael Stipe was in the 2:00 crowd). The horse soundsuits themselves were the stars of the show, with bodies constructed of ecstatically hued synthetic raffia, and masks amalgamating rich Indian, African and Tibetan fabrics, trim and embellishment. Both visually arresting and aurally stimulating, the moving sculptures swooshed gracefully or thrashed convulsively depending on the movements of the dancers and the instrumentation.

The children in attendance Monday were particularly enthusiastic. “That one looks like a panda!” one young visitor called out as a performance began. “It feels like straw-like a hula skirt,” said 11-year-old Sophia Modica from Portland, Ore., petting a mare who bowed her head, allowing a caress. Donovan Phelps, an 8-year-old from Eugene, Ore., left with a souvenir: a handful of raffia. “They’re shedding!” he reported with glee.

The horses walk, dance, wriggle, sashay, throb and roll around in two separate rings within Vanderbilt Hall for 10 to 15 minutes each “crossing,” as each performance is called. They begin calmly, as if waking up, with free-form, naturalistic movement guided by soothing harp chords and a mild conga drum beat supplied by one harpist and one percussionist per ring. The horses form a line, walking in a circle. About five minutes in, there’s a momentary break in the rhythm, and the drum takes over, crowding out the harp. Tension builds. The horses become frenzied, and the choreography gives way to an orgy of unstructured movement. Think of horses break dancing. Each one actually breaks apart, its bottom half splitting off into its own alien form, suggesting a physical separation of spirit from self. But soon the mystical harp supersedes the thumping drum, and calls everyone gently back to reality. Each half rejoins its other, assuming once more its majestic horse form. The spell is broken.