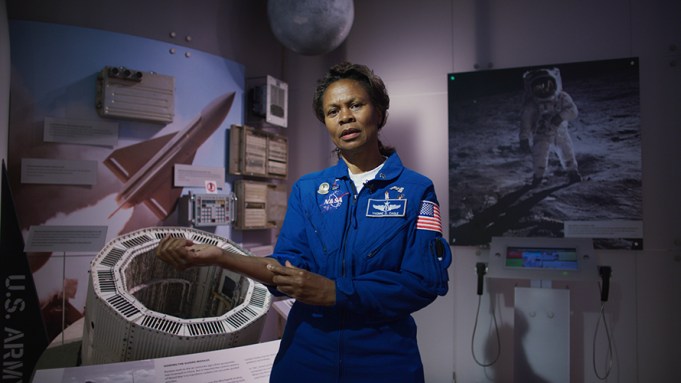 “A rat done bit my sister Nell with whitey on the moon,” poet and musician Gil Scott-Heron begins his disdainful 1970 spoken word track about the moon landing. “The man just upped my rent last night cause whitey’s on the moon,” he continues, contrasting the resources and enthusiasm invested into space travel against the plight of still grossly underdeveloped black America. Scott-Heron’s focus on inequality precluded any opportunity for him to be dazzled by our species’ potential in outer space. But some Afrofuturist mythoi have imagined space as a retreat from earthly troubles and hostilities. Nicole Miller’s new film To the Stars (2019) evokes this aesthetic tradition. The artist places the black child—a figure that is never privileged with innocence in its youth—at the epicenter of her considerations of hope, futurity, and the cosmos.

Commissioned by the San Francisco Museum of Modern Art, Miller’s 56-minute single-channel film is structured around an interview with astronaut Yvonne Cagle. As a flight surgeon, Cagle is keenly interested in the way humans physically and psychologically react to space. The first thing many astronauts do upon leaving Earth, she begins, is to gaze down on the planet they’ve just departed. The distance from home and stark beauty of space produce a halo effect, which helps create a sublime feeling that results from confronting the smallness of humankind. Cagle emphasizes resilience, which becomes a recurrent theme throughout Miller’s work: the physical capacity to withstand the extreme conditions of space is a metaphor for the ability to cope with hardship or trauma. She dreams that one day humans will “colonize” space. In microbiology, as in other fields of science, “colonize” is a neutral way to describe a microorganism’s relationship to a host, distinct from an infection. Her use of the term as a black woman feels like a jarring departure from her otherwise smooth and dreamlike cadence.

Interspersed between Cagle’s words are earnest confessionals from San Francisco middle schoolers about their daily struggles, and shots of the Bay Area ballet company Alonzo King LINES Ballet rehearsing for an upcoming performance. While coaching his dancers, the company’s founder Alonzo King offers thoughtful statements like the reminder that “the whole universe . . . wants to expand.” He translates this wisdom into instructions for his dancers when, for example, he instructs four of them to emulate emergence from a single placenta. His cue to the dancers that “you and me becomes we” encourages movement attuned to others. The film also features opera singer J’Nai Bridges rehearsing with pianist Maureen Zoltek. The first song Bridges sings is a cradle song one would sing to a black child, which becomes a backing track to the preteens’ difficult stores. Bridges’s dulcet vocals lends an uncharacteristic gravity to some of the difficult stories shared by preteens, a seriousness not often afforded to black youth. The contrast between the lullaby of her operatic singing and the young black girl recalling her family’s encounter with the police is stark, as is the gap between the nervous smiles on the children’s faces and horrors of the world they struggle to articulate. As King asks dancers to be aware of their relation to one another, Miller compels audiences to empathize with black children.

Miller told me over the phone that her goal in creating this work was to speak to more museumgoers like the young people in the film, which was commissioned for SFMOMA’s Stage and Screen program that offers opportunities for school groups to visit special exhibitions in the museum. She said that creating the film offered her and her audience an insight into the challenges currently facing youth in San Francisco, the audience of that program. Her focus on the interiority of young people in To the Stars echoes her 2016 video Athens, California, which likewise edits personal interviews to create a narrative about representation. In her new film, students of color describe tremendous anxieties around racism, self-doubt, the police, and household economics to the camera. Resilience does not come up in To the Stars simply as a way to speculate on what the human body can handle in extreme conditions; it is also a lived necessity for these children. The ability to withstand space travel is juxtaposed with black children’s far less romanticized capacity to endure racism: the former demonstrates our species’ evolutionary advantage, while the latter is a grim reminder of how black people have endured white supremacy for centuries and that black children are not spared. Miller’s is a treatment of resilience that is aspirational and cautionary in equal measure.

By high school, many of these traumatized children are angry. As a foil to King, Charmaine Shuford, a teacher at a local high school, leads her students in stepping—a style of percussive African American dance involving strong choreographed footfalls, claps, and spoken word. She says stepping was cathartic for her when she was a teenager. Accumulated frustrations are channeled into movement. In bringing together mysteries of space and the problems of social life, the fluidity of ballet and the charged release of the step, Miller offers a meditation on embodiment that offers an empathetic ear to black children.

Miller, in collaboration with cinematographer Zak Forrest, captures dancing bodies from below, making them seem larger than life. In the sequences with Alonzo King LINES, the dancers’ movements—sometimes in slow motion—become almost exaggeratedly elongated and dramatic. She uses a wide-angle lens, the kind favored by Stanley Kubrick, which exaggerates the vastness of space and makes subjects seem far larger than they really are. As King reminds us, everything in the universe wants to expand.

The most striking feature of To the Stars is its use of lasers, installed to give the projection three-dimensional qualities by emphasizing the materiality of its light. Colored lasers are projected onto the screen like the rest of the film, but extend beyond its borders. Synthesizers and mirrors enhanced the lasers’ hypnotic qualities in the interludes between the film’s segments of speaking and dancing. The rippling and looping rods of light spell out AD ASTRA, PRELUDE, and finally, THE END. They seemed to connect, as stellar constellations unite the globe, all the stories and experiences present in the film. A seamless cut between these roving beams of light and the Alonzo King LINES dancers collapses the barrier between the terrestrial and the extraterrestrial, recalling Carl Sagan’s famous assertion that “we’re made of star stuff.” The lasers elicited a sense of disembodiment kind of in this viewer, a celestial quality that seemed to connect my black earthly life and sensational experience to the endless abundance of human potential.