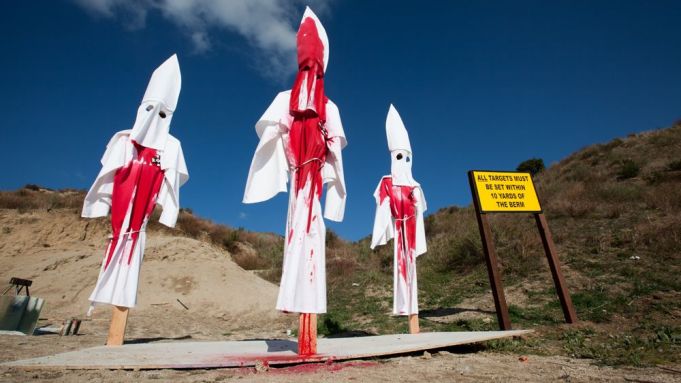 It’s rare for a rifle to be shot at an art event, Chris Burden notwithstanding. The mechanical violence of gunfire seems anathema to the presumed humanism of the arts.

Yet the resurrection of French sculptor, painter, and performer Niki de Saint Phalle’s 1962 “tirs” was somehow amusingly gun-centric. Titled for the French verb tirer (to shoot), the re-performance was part of this month’s Performance and Public Art Festival, held in conjunction with the vast Pacific Standard Time shows sponsored by the J. Paul Getty Museum and LA><ART .

Artists and their friends shot their artworks, destroying them in part and altering their appearance. The re-performance, like many of the happenings connected with PST, is an attempt to look back at the historical performances and also to acknowledge their re-contextualization when brought into the present.

In the Tujunga Canyon, located in a remote national park northeast of L.A., as shots echoed from the public shooting range nearby, journalists, a few artists, and two of de Saint Phalle’s descendants (she died in 2002) gathered to witness the recreation, called “Tirs: Reloaded,” on Jan. 22.

Before the shooting began, loudspeakers played Serge Gainsbourg’s “Bonnie and Clyde.” There was also a light buffet, set out on tables over the muddy ground, littered with dirty, discarded, blue and red gun shells left by previous shooters. The al fresco dining was consistent with one of the two original “tirs,” at which Jane Fonda, Edward Kienholz, John Cage, Ed Ruscha, Leo Castelli, among others, picnicked. Ed Kienholz, the gun handler at the 1962 performances, was replaced here by his son Noah Kienholz.

The re-performance was the brainchild of curator Yael Lipschutz, who invited twelve artists to create objects for the event. The objects were diverse assemblages, most of which concealed containers of paint and other liquids designed to erupt on impact. The younger Kienholz also contributed a luan plywood box camouflaging canisters of spray paint. African American Noah Davis, a figurative painter, contributed “Boys in the Hoods,” a trio of KKK members mocked up with stretcher bars and fabric, behind which were containers of red paint. Alexandra Grant, a painter and sculptor, made Un object pour tirer, a papier-mâché blob painted white and suspended between two white ladders.

Matthew Monahan’s “Exit Wounds” was composed of 600 photocopies of three drawings glued into two solid vertical slabs, which he turned around after shooting them to show the altered form. Jennifer West constructed “A Film Shot With Bullet Holes,” a nifty visual pun on “shooting film,” fabricated with 35 mm film, camera tape, salt, butter and aloe. French artist Brigitte Zieger made a print-drawing of herself shooting a gun titled Women are Different from Men. Painter and assemblage artist Henry Taylor built a totemic structure with wings of cardboard and hula hoops. Dutch artist Lara Schnitger’s Hostage continued her work with bleach and stretched fabric on wood, here created as anthropomorphic targets.

De Saint Phalle’s 1962 “tirs” reflected her struggles as a French woman in the years immediately after the bloody Algerian revolution and the ensuing consternation of France as a soon-to-be post-colonial empire.  The obviously political nature of the assemblages took on issues of race relations, gender equality, and the authoritarian state.

Curator Lipschutz, dressed Avengers-style in a chic black jumpsuit, introduced each installment, and guests greeted the gunfire and explosions with pleasure, awarding each of the riflepersons with polite applause, like at a golf tournament. Most shooters used Edward Kienholz’s Winchester 62 pump action 22-gauge rifle from the 1962 performances.

The oddity and surrealism of the objects and the performance were generally provocative, though perhaps not more so than the goings-on at the public shooting range nearby, located along on the road to “Reloaded,” where couples toted their weapons in cases much like those used for musical instruments. Signage along the road leading to the event, advertising ammunition for sale, contributed to the bizarre setting. On the exit route was the best sign: “Thanks for shooting with us.”

The explosive afternoon continued later with Richard Jackson’s Accidents in Abstract Painting, a send-up of the cult of abstract painting. Jackson has mused upon the role of accidents in abstract paintings since the 1960s in his “Wall Paintings,” in which he paints canvases and uses the painted canvases as, in effect, the brush, to smear the paint onto the wall before the nailing the canvas directly on the wall, face first. In a field next to the Rose Bowl Stadium in Pasadena, an eager crowd of locals, many of them apparently toy plane enthusiasts, gathered to watch the Pasadena-based Jackson crash an outsized toy plane into a large canvas that bore the name of the piece in a target-like, black-and-white circle.

Jackson experienced some technical difficulties that delayed the flight. The plane appeared to be overloaded with paint and remained earthbound. Meanwhile, one of the locals entertained those assembled by showing off his flying skills with his own small plane. The delay created suspense, while Jackson’s plane struggled to get airborne a couple of times. When it finally took off successfully, the crowd cheered its ascent. As a reward for their patience, Jackson by remote control flew the plane over the field a few times before sending it dramatically into the target, where its paint containers exploded instantly, splashing the canvas with primary colors. The exhilarated crowd roared its approval and rushed onto the field to view the painting and to watch Jackson pose for photos in front of the wreckage.

The detritus will go on view at Pasadena’s Armory Center for the Arts, starting Feb. 11.