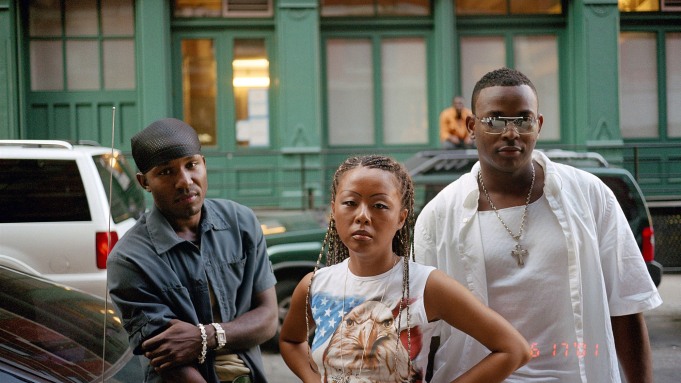 The artist Nikki S. Lee seemed to be everywhere—and everyone—in the late ’90s and early 2000s. She is best known for her “Projects” series (1997–2001), in which she attempted to assimilate into various social and subcultural groups—among them young punks, senior citizens, yuppies, and hip-hop fans—by precisely mimicking their styles and mannerisms. She would appear with them in casual group snapshots taken by friends or passersby, the amateur point-and-shoot images reinforcing Lee’s attempt at verisimilitude. The series, which she began working on as an MFA student at New York University, quickly caught the art world’s attention. She had her first solo show, at Leslie Tonkonow, in 1999, a year after graduating. By the end of the 2000s Lee had left New York for her native Seoul, where she lives today. But in 2019, she had her first US solo gallery show in over ten years, at Various Small Fires in Los Angeles, and her early work resurfaced as an object of celebration and critique.

Lee’s quick ascent, fade into the background, and reemergence can be read against the art world’s cyclical patterns of embracing and ignoring identity politics. She debuted as an edgy shapeshifter during the last gasp of the ’90s vogue for multiculturalism. In the years after 9/11, as contemporary art trends drifted toward formalism and neo-Conceptualism, Lee’s work appeared to belong to a different time. Today, in a political climate dominated by Trump’s racist apologetics, artwork addressing identity has assumed a new weight. Cultural property and appropriation have become heated topics of debate, from Rachel Dolezal’s racial masquerade to Dana Schutz’s painting of Emmett Till. Lee has always used appropriation strategically to explore issues related to race, gender roles and sexuality. Is her work a provocation or a genuine search for connection? Does she celebrate the mutability of identity or comment on the limits of assimilation?

Coinciding with her first solo show, Barry Schwabsky wrote a profile for the September 1999 issue of Artforum that delved into the social politics of Lee’s process. For each series, Lee would spend up to several months observing various groups, and a few weeks posing with them. Schwabsky, for his part, dodged the question of appropriation by insisting that Lee could not effectively pass in certain groups. “There’s no way this Korean could convince a group of Latinos, for example, that she’s one of them, though it is quite possible for them to act as if that were the case,” Schwabsky says of her Hispanic Project (1998), where she appears at the Puerto Rican Day parade and locations in Spanish Harlem, wearing a gold nameplate necklace (“Genie”) and a slicked-back ponytail with hair extensions. “The people who pose with Lee are her collaborators but they don’t have to understand why she’s doing what she does; they only need to be willing to play along.”

Lee’s debut earned further praise from the New York Times. In his review, Holland Cotter suggests that Lee’s work occupies a “post-ethnic” position that rejects essentializing notions of identity. He was especially impressed by Lee’s bleach-blonde persona in the Ohio Project (1999), where she was photographed alongside blue-collar white Midwesterners. Her ability to lampoon upper-middle-class white culture was also applauded. In a 2001 article for Art Journal, Maurice Berger analyzes her pitch-perfect emulation of preppy style in the Yuppie Project (1998) as a critical take on whiteness.

After Lee’s first show, interest in her work exploded. Several subsequent “Projects” were commissioned by institutions, including the Skateboarders Project (2000) for San Francisco’s Yerba Buena Center for the Arts; the Exotic Dancers Project (2000) for the nonprofit Real Art Ways in Hartford, Connecticut; and The Hip-Hop Project for the exhibition “One Planet Under a Groove: Hip Hop and Contemporary Art” at the Bronx Museum of Art (2001), curated by Franklin Sirmans and Lydia Yee. The Hip-Hop Project shows Lee’s most dramatic transformation: with dark bronze skin and prominent lipliner, her hair either under a bandana or cornrow wig, she poses with African American friends. In a video interview produced by the English-language Korean network Arirang TV, she explains that she went to a tanning salon two to three times a week to darken her skin, and bought make-up to match her deeper skin tone.

Since the ’90s, Lee has spoken often about her motivations behind the work. She has emphasized the importance of group identity and social performance in Asia, as opposed to the more personal sense of identity in the US. In an interview with curator RoseLee Goldberg published in 2006, she says: “Western culture is very much about the individual, while Eastern culture is more about identity in the context of society. You simply cannot think of yourself out of context.” But more recently the cultural politics of Lee’s “Projects”—especially the Hip-Hop Project—have been questioned. In a 2016 essay, scholar and poet Eunsong Kim likens her use of “blackface” to works by the white artists Cindy Sherman—who donned dark makeup to imitate passengers she observed on her bus route in an early series—and Joe Scanlan, who created the African American alter ego Donelle Woolford and hired black women to play her in public performances. Kim also criticizes the anonymity of Lee’s subjects, highlighting the similarities between the work and “colonial travel photography.”

Cherise Smith, chair of African and African Diaspora studies at University of Texas at Austin, takes a contextual approach to Lee’s work. In her 2011 book Enacting Others, Smith writes about Lee’s practice alongside instances of racial and gender crossing in performances by Eleanor Antin, Adrian Piper, and Anna Deavere Smith. In a phone conversation, Smith pointed out that Lee’s background as a Korean national certainly informed her worldview, and possibly made her subject to misrecognition in the US. Still, she concedes, there are “dubious politics” that “empower some groups and disempower others” in Lee’s work. Looking at the Hip-Hop Project, she says that “difference and incongruities” between Lee’s presentation and that of her fellow subjects is apparent. At the same time, Smith mentions that in many parts of the US— including Houston, Los Angeles, and Hawaii—black and Asian communities live side by side, sharing tastes in food, music, and clothing. Hip-Hop Project could be viewed as a commentary on class identity and assimilation.

The mutability of identity has been a common theme throughout Lee’s work—with gender, sexuality, professional personae, and national concepts of beauty as various anchor points. Following “Projects,” Lee embarked on “Parts” (2002–04),  a series of staged photographs in which she posed with different men, cutting their bodies out of the prints before they were mounted. “I realize that my own identity changes depending on whom I’m going out with or who becomes my boyfriend,” Lee tells Goldberg. Her willingness to change her behavior or looks is an expression of emotional labor not unique to women or heterosexual relationships, but nonetheless common to them. Formally akin to torn post-breakup photographs, the artfully composed pictures seem more like cinematic stills. In 2006, she made a feature-length mockumentary, a.k.a. Nikki S. Lee (2006), that depicts “Nikki One” (a serious, buttoned-up artist) following the life of “Nikki Two” (an enfant terrible art star) in locations including the Venice Biennale and the Armory Show. The film, which premiered at the Museum of Modern Art, was one of Lee’s last works made in New York: she returned to Seoul in 2008.

In the years since, Lee has largely focused on writing and directing a forthcoming feature-length film called Two Monks, chronicling a gay love affair between American and Korean monks. However, a recent body of video art, “Scenes” (2014), sees her picking up where she left off with “Parts.” In the short videos, Lee makes out with various male partners across the Korean capital. While Lee is fully in control of the scenes, they explore various gendered power dynamics. Cherise Smith calls some of the clips disturbing, including an instance where a man puts his hands around the artist’s throat.

Lee’s work gives viewers much to unpack. Gesturing beyond ’90s-era platitudes about multiculturalism, Lee put herself—or some version of herself—into her pictures. What distinguishes her alter-ego performances is how contingent they are on relationships, on how much she can adapt her style and affect to those of others, even when they are literally cut out of the frame. Her work foregrounds questions of cultural assimilation, even though she does not try to assimilate with the groups that she studies. Using this push-pull dynamic of approximation and distancing to imitate stereotypically white styles of dress and mannerisms, she makes a powerful statement about privilege and neutrality. When she emulates the clothing, gestures, and beauty standards of historically marginalized groups, however, she risks reinscribing racist stereotypes—or suggesting that attaining power is as easy as changing one’s clothes.

Has the intensive study of cultural difference influenced her film work, which touches on questions of sexuality and ethnicity? Perhaps. One of the goals of her monk film, as she wrote in an email, is to “see Buddhism in a different way from orientalism.” Orientalism operates by fetishizing and propagating cultural stereotypes about Asia. Presumably, Lee is crafting the film to reach both Western and Korean audiences. Lee has made a name for herself as a reverse Orientalist, as an expert mimic of primarily Western subcultures. It seems that she has primed herself for yet another reinvention.