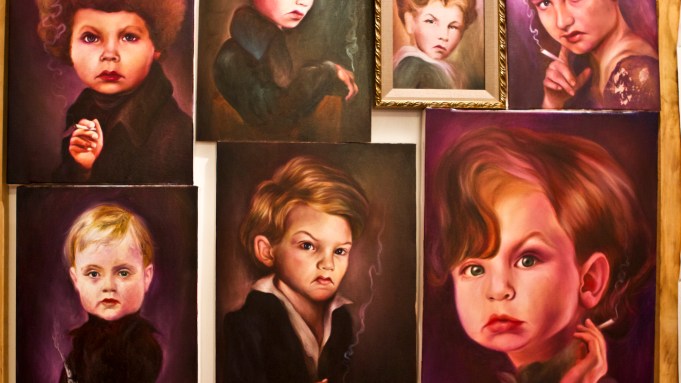 “This is the first time I’ve considered myself a painter,” says Israeli-born, New York-based artist Nir Hod, leaning against the kitchen counter in his Meatpacking District studio. “Before, I always considered myself a storyteller or image producer, never a painter. Painting for me was just important as an idea, just fantasy.” The figures that pushed him toward an identity as a painter are a fantasical group of depraved children, the stars of “Genius,” a parlor’s worth of quasi-absurdist portraits of Masters-of-the-Universe-in-training [opens May 19 at Paul Kasmin Gallery in New York].

Through a half-dozen solo shows internationally, Hod’s paintings have involved youth-inspired, hyper-real takes on louche narcissism, be they lines of cocaine, Warholian flowers, provocatively sexual naked women, or self-portraits exploring androgyny or simply Hod riding his bike around the neighborhood. After studying at Jerusalem’s Bezalel Academy and New York’s Cooper Union, Hod first rose to prominence in 1997 as the author of a book of poems and photos, Forever, which became a cult sensation among Israeli teenagers. Three years later he released a pop album, Last Letters to Anna, based on his poetry. Simultaneously he was photographing himself in a series of dark, alterately occult and camp staged images—as a witch, a mime, or a bare-chested female soldier. There we see the artist formulating his ideas about sexual confusion, mistaken identity, death of innocence (and innocents) and excess.

The first “genius” was born three years ago, when Hod painted a portrait of a bobble-headed, black-turtlenecked grade-schooler—cigarette in hand, faintly smirking—as part of an installation, “Nova 7,” at Alon Segev Gallery in Tel Aviv. There, Hod meticulously replicated the effect of the office of a gray-market money-changer with Sheetrock, “really bad Croatian furniture that could give you cancer just from the feeling of it,” and this painting, which he called Genius. The gallery sold the painting, which he bought back and subsequently hung in his studio.

Hod spent the next two years, without the promise of a show, creating 51 more geniuses. The artist explains that the figures exist in a state of innocence, “before people become aware of themselves.” It’s a world where children bombastically sport cigarettes and hustler fashions, Mozart wigs and afros and ghost white shags against lush backdrops of van Dyck brown and the purple glow of seventies Polaroids. It’s a world that references El Greco, Titian, Elizabeth Peyton and Alice Neel alongside JCPenney portrait studios, Eastern European porn, hair from fifties-era mannequins and crusty U.S. Senators, disco-era fashion ads, the mouths of philosophers and wax-museum pieces.

“That [photo] was a big influence to me,” says Hod of a snapshot of former Israeli prime minister Yitzhak Rabin and King Hussein of Jordan sharing a cigarette after signing the 1994 peace agreement. “It’s almost like Karl Lagerfeld and Yves Saint Laurent meeting in Milan.” The artist is intrigued by the way the cigarette adds elements of spontaneity and civility. “If Obama took a picture with a leader like that it would be such a craze, but look how interesting it is, just because of the cigarette. There’s some magic here.”

In Maxim (2010), Hod places the hair of a spoiled child he photographed at the SoHo bistro Balthazar in contrast to blue, gray and purple background brushstrokes that provide a vivid modernity to a classic, old master atmosphere. He melds a gigolo leaning against a tree from a Russian postcard—shirt unbuttoned almost to his navel—with a lounge-lizard outfit inspired by a look from an old German suiting catalog to create Francis (2010).

The artist says his weird-looking children and cheap-shock cigarettes expose a “mistake of reality” by which  we take for granted the trademarks of quality and value—or, for that matter, reality and fantasy. He’s challenging the artistic value of cheap-looking paintings rendered masterfully. “You can see something in the office at Gagosian and it will be amazing, but you can have Alice Neel hanging somewhere in Queens and it will look like it’s from the garage,” Hod jokes.