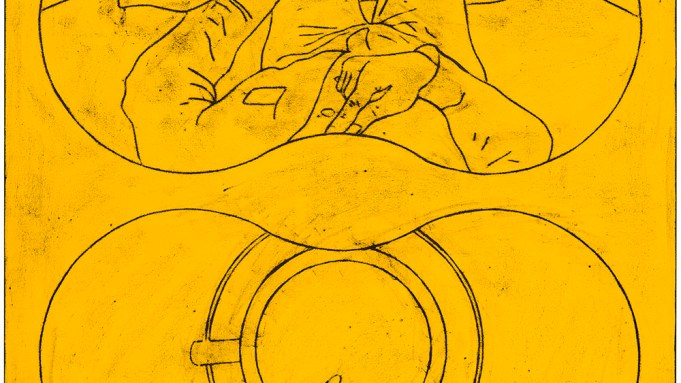 In Matt Mullican’s exhibition “Pantagraph,” at Peter Freeman through December 17, five large banners (all 2013) bearing the artist’s personal cosmology of signs hang down from the ceiling throughout the length of the space. Since the 1970s, Mullican has been constructing an individual language to investigate modes of representation and communication. Bearing simplified pictograms and employing color as an organizing principle, the banners indicate the five categories of Mullican’s all-encompassing cosmology, from physical elements to his subjective worldview. The language of universal design is in no way sacred, and the bright colors and streamlined forms represented resemble the corporate logos of banks, technology companies, and international brands. The blue banner, for example, which represents the “world unframed,” or the unconscious, incorporates a symbol almost identical to that of the World Bank. The Pinterest logo could easily have been designed after Mullican’s red banner, which symbolizes subjectivity.

Spread across 16 wooden tables between the banners are 535 pages on which all the illustrations and chapter headings from psychoanalyst Carl Jung’s final book, Man and His Symbols, have been isolated. The almost encyclopedic assortment of cultural images is re-numbered as its own collection, devoid of context. One image struck me in particular: an engraving from William Blake’s Illustrations of the Book of Job, in which Job, lying supine on his bed, holds up his arms to keep Satan at bay as demons below tug at his legs. The text beneath reads, “With Dreams upon my bed thou scarest me & affrightest me with Visions.” Like a lot of people, I’ve been anxious lately, and keep expecting things to get even worse. An unfair vision to cast on this work, no doubt, but I can’t help but see Mullican’s hall of banners as indicative of a new world order, the project a fascistic warning ominously suspended over all our symbols, our dreams, our futures.

From the shifting symbols and language of his cosmology to the obsessive physical actions of his trance state performances, Mullican constantly attempts to understand the world as he personally experiences it. His recent performances of the new work That Person and That World at the Kitchen in New York on November 18 and 19 were promoted as a return to the site, where he last performed in the 1980s. Over the course of the two nights, Mullican rehashed many of the tropes and games that have defined his career since.

For the first performance, the audience was ushered past the risers and towards the rear end of the stage. Mullican was already seated in the corner, fenced in by three curved rows of chairs. Positioned like someone preparing to read a children’s book aloud—or a trapped animal—Mullican introduced the piece as a “visceral landscape” in which “terrible things” happen. As Mullican began to narrate, he sat with his eyes closed, grimacing and gesturing as he probed the details of the story. Set on the Upper West Side sometime between 1975 and 1995, the plot advances slowly as Mullican revels in the tale’s sensory details: stating his love for the smell of bus exhaust, fixating on the wetness of snowflakes. This peripheral focus continued as he described arriving at the apartment of a coworker with an absent husband, a woman he has a crush on. She’s made chicken, and the recipe is relayed from her to him to us: garlic cloves slid under the skin, a lemon squeezed out and inserted within. They drink martinis, which he appreciates for their crystal clarity, their syrupy viscosity.

Mullican’s narration advanced as his descriptions gave way to more sensual pleasures. Having made coffee, his unnamed companion asks if he wants anything with it. She puts her hand on his shoulder, and suddenly all of his senses arc towards her, towards sexual escalation. As they begin to touch, the real Mullican before us clenched his face and rocked his head as he described the softness of her skin, the smell of her sweat, the movement of her hand down his stomach. Their moaning and laughing is interspersed with humorous interjections, like his aside about “all these tiny little buttons” on her bra.

Mullican promised terrible things, and as the two are having sex, her husband appears, knife in hand. Embodying the husband, Mullican screamed obscenities, yelled, and stomped his feet. Flailing, the husband accidentally cuts himself and begins to bleed to death. By this point, Mullican had stopped referring to himself in the first person, using the pronoun “they” to suggest both himself and his lover. As the two wait for the police, they move the bloodied sheets and clothing into the bathtub. With her husband dead and little proof of her own innocence, she seems to be figuratively dying. Mullican concludes, “I, or he, the boy, is toast as well… they’re no longer living. No going back, it’s finished.”

I struggled to commit to any particular tense in describing this performance. The slipperiness of identification and of memory is largely the point, though. Mullican’s language was an awkward thing in the theater, where the house lights remained on during the performance. The experiences of Mullican on the stage and his character in the fantasy blend together. Mullican’s fervent physicality and droll asides are compelling within this game of changing perspectives, but ultimately produce an untroubled account of the self-involved genre of masculine fantasies that devolve into emotional violence.

On the second night, a second set-up: a table with four chairs, some glasses, and bottles of water stood on one end of the stage, a duvet and a pillow at the other. The audience’s seats were aligned parallel to the stage. Mullican entered from behind a curtain, seemingly in a trance. He slowly traced the rear wall, humming and moaning and slapping it (explained later as “knocking on the door and waiting to get in”). Mullican then sat at the table and began to slam the glasses on the table before filling one to the brim with water. An assortment of infantile sounds followed as he slowly drank: chuckling, inarticulate whistling, humming “Jingle Bells,” and exaggerated slurping (“dinner”). Afterward, Mullican moved the chairs to produce a makeshift bed, where after removing his socks, he squeezed and pressed himself against the pillow (“making love”). Kneeling in the corner in which he had sat the day prior, Mullican yelled obscenities, then cried out: “Get out! Get me out of here! Here we go again!” as he pushed himself further into the corner (beginning “the tragedy” of the night prior). After a period of vocalizing “NO” over and over again, he trailed slowly down the wall with the pillow held over his head, disappearing behind the curtain.

While Mullican aims to channel a deeper state, he knows that audiences often doubt that his trances are actually “real,” as opposed to “staged.” I find this distinction unnecessary: either way the trance is a stage tactic, and Mullican’s actions genuinely enact the anxiety, frustration, and anger that, on some level, we all feel. But by operating within an insulated system of performance in which he explores his own subjectivity through personal reflection, and in the closed-circuit of his individual cosmology on display at Peter Freeman, Mullican’s work thoroughly and completely turns inwards. In the performance, as his inner self pounds at the wall to get in, the trance shatters, and we realize that it was all emotional projection, not empathy.