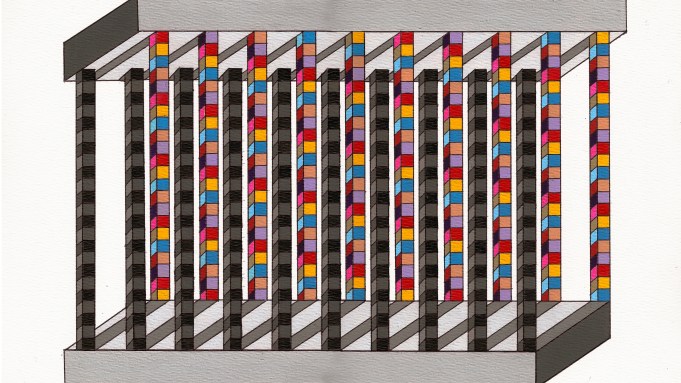 This Friday, the seven former members of University of Southern California’s MFA class of 2016—Edie Fake, Ellen Schafer, George Egerton-Warburton, Julie Beaufils, Lauren Davis Fisher, Lee Relvas and Sid M. Dueñas—open “Recesses,” a show of their work, at Paul Soto’s Los Angeles apartment gallery Park View. The group made headlines in May when they collectively dropped out at the end of their first year of study. Previously, the program at USC’s Roski School of Art had been renowned for its intimate size, faculty, guaranteed teaching opportunities and generous funding packages. With the arrival of Dean Erica Muhl in 2013—who also presides over USC’s Jimmy Iovine and Andre Young Academy of technology, arts and entrepreneurship—changes were afoot that the former MFA students said affected them even before their arrival on campus in the fall of 2014. In an open letter, the students cited drastic revisions to the pedagogical structure, the resignation of faculty members A.L. Steiner and Frances Stark, and the potential loss of teaching assistant positions among their reasons for leaving the program.

Schafer, a former editorial staffer at Art in America, spoke to A.i.A. by phone on behalf of the group. “So much of our experience was about learning from each other and working with each other,” Schafer said of her time at USC. The exhibition at Park View, comprised of paintings, sculptures and installations created by the seven artists, remains on view until Aug. 8. Later this summer, the group will mount a show at Shanaynay, a collectively run gallery in Paris.

“We want to return to the conversation but not as a hashtag, not as USC7,” Schafer says. The artists, while working individually, are cultivating a unique sense of community. Steiner, the former USC MFA program director, has helped organize trips for the group to two artist-run projects in California steeped in countercultural ideas of living and pedagogy: Fritz Haeg’s Salmon Creek Farm in Albion and Andrea Zittel’s A-Z West in Joshua Tree. Schafer says that she and her peers are considering organizing conversations and programming next year, though not as a formalized alternative education program.

Meanwhile, the future of USC’s MFA program remains fraught. Currently only one student is enrolled in the incoming class of 2017, and recruiting efforts have been temporarily suspended. Additionally, a recent letter signed by more than 70 prominent USC alumni condemned Dean Muhl’s actions.

The changes in USC’s program raise larger questions about the sustainability of art education, echoed by the resignation of Cooper Union’s president Jamshed Bharucha, who led the formerly-free institution to the controversial decision to charge tuition. According to the New York Times, Cooper Union’s financial management is currently under investigation by the New York state attorney general’s office.

For the former USC MFA students, there are no easy answers. While they still support the MFA model, they say their exit “raises questions about the limits of the university experience.” The USC administration “failed to take into account the far-reaching network of artists and the art world,” Schafer says, “the kind of community network we return to and that was always there.”

RS Recommends: Get a Fitbit From $76 As Part of This Fitness Tracker Sale Online