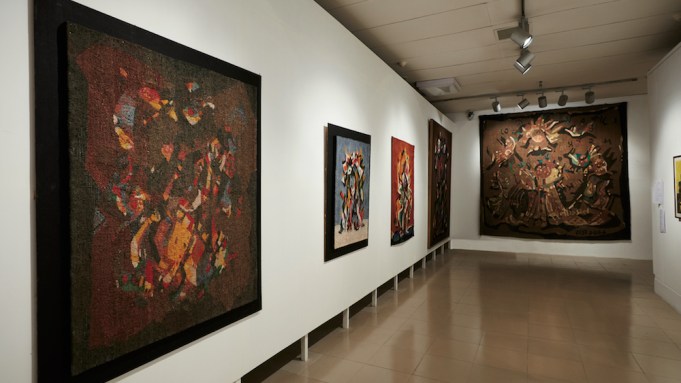 Not yet fifty years old, Bangladesh is a relatively new country whose people have a long artistic tradition. Artists active in the 1970s like Rashid Choudhury, who is recognized for modernist tapestries informed by Bengali folk weaving practices, as well as contemporary figures like Naeem Mohaiemen, who exhibited a film installation at documenta 14, are becoming increasingly visible on the international stage. This visibility follows in the wake of significant efforts since the country’s independence in 1971 to establish ties between the Bangladeshi art community and the global art world, with key artists and curators connecting first with counterparts in Asia and the Eastern Bloc in the 1970s and 1980s, followed by a wave of recent overtures to institutions in the West.

Such cultural efforts often receive little attention outside South Asia, in part because international media coverage of Bangladesh is dominated by reports of disaster. (The first time many people in the West heard the word “Bangladesh” was in the context of George Harrison and Ravi Shankar’s relief concert at Madison Square Garden in 1971). This focus on catastrophe—from the 2013 collapse of a garment factory building to this year’s devastating floods—obscures a more nuanced picture of a country that has made impressive strides in human development. Bangladesh now has one of the highest life expectancies in South Asia, several years longer than its larger neighbor India, as well as the highest female purchasing power in South Asia. The country’s politics have been dominated by female leaders since the 1990s.

Dhaka, often regarded by visitors as overcrowded and clogged with traffic, hosts the oldest biennial of contemporary art in Asia: the Asian Art Biennale was founded in 1981, fourteen years before South Korea’s Gwangju Biennale. Through catastrophes and famines, Bangladesh has proven to be a resilient country with a history of resistance to colonial control, a distinctive culture that blends Hindu, Buddhist, animist, and Muslim rituals (even though today Muslims make up more than 90 percent of the population), and a firm commitment to maintaining secular government.

Modern Bangladesh has its origins in the partition of British India following independence in 1947. The new country of Pakistan was divided into East and West enclaves separated by nearly a thousand miles of India’s landmass. Though East Pakistan, which was to become Bangladesh, had the larger population, with millions living in the city then spelled Dacca in English, the divided country’s economic and political power was consolidated in the western portion. Though both East and West Pakistan were home to Muslim majorities, the residents spoke different languages (Bengali and Urdu, respectively) reflecting very different cultures.

Soon after the partition of India, Bengali artist Zainul Abedin established the Government Institute of Arts and Crafts (now the Faculty of Fine Arts, University of Dhaka); the Pakistan Arts Council was founded in Lahore the same year by dynamic figures from the cultural scene, including poet Faiz Ahmad Faiz, playwright Imtiaz Ali Taj, jurist S. A. Rahman, and painter A. R. Chughtai. An East Pakistan Arts Council was established in 1963 in a modernist rotunda building. Until Bangladesh’s 1971 Liberation War, these institutions helped facilitate extensive exchanges between artists living in the East and West sectors of the country.

Rasheed Araeen, perhaps the best-known artist of Pakistani heritage working today, spoke to me during a recent studio visit about the tremendous influence that East Pakistani artists such as Abedin and S. M. Sultan had on his development as a young artist based in Karachi, West Pakistan, in the 1960s.[simple_tooltip content=’This discussion occurred on a visit to Araeen’s studio in October 2016. I was
accompanied by British-Bangladeshi artist Rana Begum and Yorkshire Sculpture Park senior curator Helen Pheby.’]1[/simple_tooltip] Araeen recounted creating a series of watercolors inspired by Abedin’s lyrical depictions of boats. Sultan admonished Araeen to stop copying the style of others and create works from his own life experience—a directive that Araeen cites as formative for his later practice. During a panel at the 2016 Dhaka Art Summit, a symposium and exhibition program that occurs in Dhaka every other year under my artistic direction, Cornell art historian Iftikhar Dadi also noted the cultural prestige that East Pakistani artists held in the bipartite country—a point of pride at a time when economic development in the East was lagging. Dadi cited a statement by Pakistani art critic Akbar Naqvi: “the East Pakistanis were naturally endowed with art whereas we in West Pakistan had to work hard to become artists.” Dadi offered the quote not to endorse Naqvi’s overgeneralization, but rather to shed light on general sentiments that even during the colonial period, what is now known as Bangladesh was producing exceptional artists.

Bangladesh’s push for independence from Pakistan began with student uprisings in 1952 sparked by the West Pakistan government’s declaration that Urdu would be the official language of the country. Deep-seated cultural and economic conflicts culminated in a bloody war, fought between March and December 1971, often in brutal guerrilla battles. Under a notorious mandate known as Operation Searchlight, West Pakistani troops specifically targeted and killed members of the Bengali intelligentsia in an attempt to quash their culture.

Cognizant of the important role of art in the development of the new country’s identity after such terrible losses during Operation Searchlight, Parliament in 1974 established the Bangladesh Shilpakala Academy, which would replace the East Pakistan Arts Council and occupy the same building until it was destroyed in the late 1990s to make way for a new structure. The charismatic Bangladeshi artist Syed Jahangir, born in 1932 (though 1935 is often cited in biographies) and based in West Pakistan from 1959 until 1971, assumed the position of director general of the Shilpakala Academy in 1977. The fifteen years during which he held the post are often described as the Golden Age of Bangladeshi art. Jahangir was initially reluctant to accept the directorship because it meant halting his own successful career as an artist celebrated for colorful semiabstract compositions inspired by flows of spiritual energy he perceives in the world.

In the face of the United States’ strong support for Pakistan, Bangladesh joined the Non-Aligned Movement, an international organization meant to counter the Cold War superpowers’ global influence. Through such efforts, Bangladesh attempted to engage on its own terms with the rest of the world, and international cultural initiatives proved to be powerful diplomatic tools in this regard. Soon after joining the Shilpakala Academy, Jahangir began organizing exhibitions of Bangladeshi art abroad, staging one show in Dresden in 1978 and traveling to Fukuoka, Japan, in 1980 to consult on what would become the First Fukuoka Asian Art Show.1 That exhibition included seminal works of Bangladeshi art such as Choudhury’s majestic 1980 tapestry Lady with a Butterfly and Safiuddin Ahmed’s paintings of abstract patterns created by fishing nets and floodwaters.

While visiting Fukuoka with thirteen other delegates from across Asia, Jahangir decided that Bangladesh should adopt a biennial format to host its own Asian Art Show. Jahangir scrambled to organize the biennial as quickly as possible, aiming to open it in 1981. Though he had strong connections to the Bangladeshi ministry of culture and within diplomatic circles, few countries initially agreed to send delegations to the event. Still, Jahangir managed to convince leading artists in Asia at the time, including Mochtar Apin from Indonesia and Redza Piyadasa from Malaysia, to exhibit their work individually, without their country’s official participation. In the end, fourteen nations were represented in the program when the exhibition opened to acclaim from local and international critics on January 4, 1981.

Dhaka’s Asian Art Show grew over five editions under Jahangir’s direction, and many of the key works from each presentation were acquired by the Bangladesh Shilpakala Academy. One pivotal work for Bangladeshi art history is Sultan’s First Plantation (1975), a painting on unprimed jute that employs natural pigments. Previously known as a landscape painter, the artist for the first time painted a Bengali farmer as a giant muscled hero figure. Those viewers unfamiliar with the secular nature of Bangladeshi art might be surprised to see that the two buxom angels flanking the farmer are nude. In a recent interview with me, Jahangir recalled that this work was among the most celebrated in 1981, a testament to the limited influence conservative Islam has in the country’s artistic community.

If the Asian Art Biennale remains little known outside Asia it is because Jahangir’s approach to curating through direct contacts with international artists was not continued after his resignation in 1991. Bureaucrats operating through official diplomatic channels took over responsibility for selecting participating artists, and the biennial transformed into a government relations exercise. The seventeenth edition of the Asian Art Biennale, held in 2016, expanded to include Poland, South Africa, Argentina, Canada, and the United States, bringing the total participation to fifty-four countries. Though larger in scale and broader in scope, the show has lost its nonaligned spirit, succumbing to a generic internationalism.

While the Asian Art Biennale is no longer the vibrant institution it was in the 1980s, the Bangladesh Shilpakala Academy plays host in alternate years to both Chobi Mela (one of the oldest photography biennials in Asia) and the Dhaka Art Summit. These efforts attempt to reclaim the vitality of Syed Jahangir’s days, offering a platform for international art outside of official control and giving local artists increased opportunity to develop their work free of market demands.