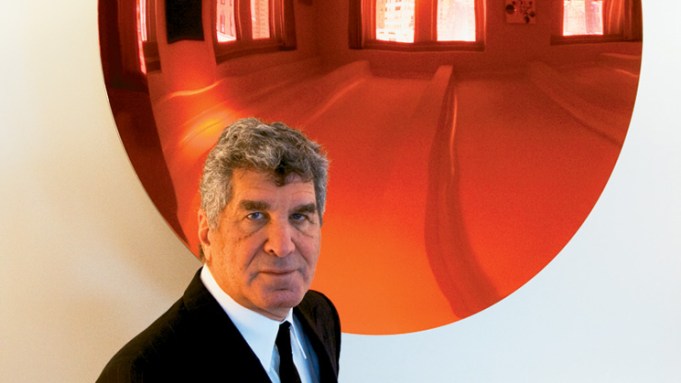 When New York collector Douglas Oliver’s daughter was a high school junior abroad in France, she excitedly phoned her father to tell him that her class was studying Yves Klein. An image of a blue nude torso the class had discussed was just like the one in their living room in New York. “I think it’s good for the kids to see that connection between art and life,” says Oliver, a no-nonsense real-estate investor with salt-and-pepper hair, a taste for Dior, and two preschool-aged grandkids who enjoy their grandfather’s small, silver Takashi Murakami “D.O.B.” painting as much as their mother did the Klein torso.

To create something akin to that great- art-at-home experience for more children, Oliver has pledged to start a collection for a new private school to be housed in a 10-story warehouse building he owns in the heart of Chelsea.

The comprehensive Avenues: The World School, spanning kindergarten through 12th grade, doesn’t exist yet, but the building is well known to Chelsea gallerygoers. It occupies an entire block of Tenth Avenue, between 25th and 26th Streets, and for six years, from 2003 to 2009, it featured a seemingly ad-hoc window display devoted to emerging artists, such as Shepard Fairey and Tobias Wong.

Inside, unseen to passersby, ABC Television has stored soap opera props for the past two decades. Now they
billion of which is for private elementary and secondary education, according to the U.S. Census Bureau), Oliver decided a private school would provide the most stable tenant and best new community asset for Chelsea.

Avenues (in which Oliver is an investor) will provide an additional education option for the growing numbers of affluent families in the recently built condominiums and developments of west Chelsea. The building is well suited for the school in part because it can provide a large but intimate campus. The school plans to make use of the neighborhood’s galleries and studios, through regular visits and in-school curated shows, and
of the High Line, which runs alongside the building. Scheduled to open in the renovated space in fall 2012,
the Avenues is the brainchild of Chris Whittle, former founder and CEO of Edison Schools, a management company and proponent of market solutions for education needs. For Avenues, Whittle has partnered with Benno Schmidt, former president of Yale and cofounder of Edison, and recruited private education stars such as Fernando Reimers, head of Harvard’s International Education Policy Program, as an advisor; Tyler Tingley, former head of Exeter Academy, and Robert Mattoon, former head of Hotchkiss, as co-heads of the school; and a raft of former Dalton School educator-managers. The New York campus will be the first of a planned dozen or more international campuses, where paying families can easily transfer to, say, London or Dubai, if that’s where work takes them. Avenues: The World School will emphasize “global competency,” through, for example, emphasis on foreign languages and understanding the processes of globalization.

Oliver bought the warehouse building in 1978 for $635,000, when the tenants included the Guinness Book of World Records and a coat company. Street traffic was more likely to include prostitutes than artists. After making other savvy real-estate investments, he began collectingart in the 1980s, with an early interest in John Baldessari. His contemporary collection includes significant works by Anish Kapoor, Richard Prince, Gabriel Orozco, Takashi Murakami, Tim Eitel, Martin Eder, Lisa Yuskavage, Yoshitomo Nara, Ed Ruscha and Carroll Dunham, as well as works on paper by Jim Hodges, Dana Schutz and Chris Ofili. “I have 190 pieces and every one of them is hanging,” says Oliver. “I have two homes, children with homes, friends’ homes—the art goes on the walls there. Nothing is in storage.”

Oliver also likes to use the Chelsea warehouse as a display space. Though the exhibition window, which frequently featured artists represented by dealers Nils Kantor and Zach Feuer, are moving out the velvet sofas and worn beds because Oliver has leased the entire building to the school. After researching the education industry, which, Oliver points out, accounts for more than $1 trillion in spending in the United States annually ($50 is now closed, a flag by artist Frank Benson flies on top of the building (easily overlooked, it is digitally altered to have wavy stripes and bunched-up stars, with the idea that it look “normal” blowing in the
wind), where it may stay as the roof is con- verted to an outdoor space for children. Oliver is also considering bringing one of his lat- est acquisitions, Nara’s giant 2010 White Ghost sculpture, to the roof for the school year, rotating it back to his Southampton home in the summer.

The opening of Avenues in 2012 will mark the first time the landmark building will be for public use and the first time its interior will be substantially altered, by the architectural firm Perkins Eastman, which is opening up the center to create a broad stairwell, for instance. The warehouse was constructed in 1928 by noted American architect Cass Gilbert, who had designed the Woolworth Building several years earlier.
The history of Oliver’s building is intertwined with that of the High Line. One of the elevated railway’s first deliveries, of turkeys, was made here to the food distributors who commissioned Gilbert. Today, the second phase of the High Line park is taking root on the rail outside Oliver’s building. Perhaps recognizing the enhanced real estate value the High Line would bring, Oliver was an early supporter of the park’s creation. His warehouse has the only extant porch—a large concrete slab jutting out from the building—on the High Line. Soon, on a sunny day, there might be school-children discussing a recent visit to Cheim & Read or Mari- anne Boesky galleries on that porch, staring at boulevardiers taking in the city view.