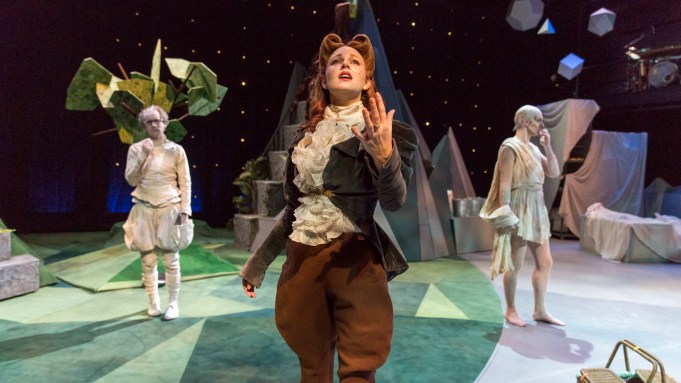 In his solo performances, Alexandre Singh often assumes the persona of a slick motivational speaker. Using nothing more than an overhead projector and stacks of transparencies, he charts webs of connections between far-flung images and texts. Over the course of a lecture that meanders between authority and irony, or in one of his flowchart-like artworks, he might show how “Sex and the City” and “Grey’s Anatomy” are predetermined by the work of Lord Byron and Oscar Wilde. Singh mines the deep structures of culture, those core narratives and beliefs that persist over time even as the surface features of art and literature change to satisfy fickle tastes. Still, his work seems to be less about establishing a theory of everything so much as reveling in the paradoxes, tangents and idiosyncrasies that spiral outward from the attempt to systematize something as unsystematic as human culture.

So it actually seems logical, even necessary, that Singh’s practice would develop into a sprawling theatrical production. The Humans, with a cast of dozens, had its U.S. premiere at BAM’s Fisher Theater as part of Performa  (through Nov. 17), having been produced at Witte de With in Rotterdam in September.

The Humans teems with giddy ambition. Ostensibly about the creation of mankind, the part opera, part allegorical play is concerned with the basic infrastructure of human society: ethics, religion, science, philosophy, good and evil. This sounds like heady stuff, and it is, but Singh’s production adheres to the Brechtian proposition that the first responsibility of theater is to entertain. So we witness what is essentially a narrative primer on Nietzsche punctuated by lively song-and-dance numbers and slapstick routines.

One imagines that the whole production began as a diagram. A core opposition between the Dionysian and the Apollonian is reflected in Singh’s symmetrical set design. Verdant stage right is overseen by N (Flora Sans), a full-figured bunnylike creature who communicates in flamboyant body language and spends her days in a giant outhouse. Stage left is the staid realm of sculptor Charles Ray (Phillip Edgerley). He is the logician, the space-measurer, the creator of man. His ash-colored studio looks like a tidy version of Dürer’s Melancholia 1, filled with masonry tools, instruments of learning, and the requisite dodecahedron. From her outhouse throne, the bunny-woman produces great rivers of excrement; out of Ray’s studio come statuesque human automatons who live only to toil and obey. A towering mountain of fractured polygons divides the stage, ensuring that these two poles of existence remain forever separate.

From the beginning, though, the balance of this static dichotomy is thrown off and a narrative set in motion by the offspring of the bunny and the sculptor. The demigods Pantalingua and Tophole have inherited mixtures of their forbears’ qualities. The beautiful Pantalingua (Elizabeth Cadwallader) is as articulate, rational and self-assured as Ray, but shares her mother’s pugnacious streak. Tophole (Sam Crane) is the kind of authoritarian subject one finds in most Hugh Grant films:  neurotic and lovesick but essentially obedient. Together they plot to subvert the divine plan of Voxday, the omnipotent force (possibility just a misunderstood cat) that has blessed the world with air conditioning, demands offerings of milk, and issues commands discernible in leftover espresso grounds.

All of this and more is exposited in the first 30 minutes of the three-hour performance, mostly in rapid-fire Oxbridge banter between Pantalingua and Tophole. At times one worries whether the vast scope established at the outset might devolve into a great mess in the hands of a first-time director with a well-used library card and lot on his mind. In a recent interview, Singh defended the conventional narrative structure of the work: “I challenge anyone to write an opera from scratch . . . it’s just as difficult as making an avant-garde piece.”

Yet what holds The Humans together is precisely that Singh didn’t begin with an empty page. This tale of creation-of starting anew-is as familiar as they come, and Singh has filtered his script through a great cultural sieve. The anachronistic world created on stage leans heavily on Greek theater, the Bible, Shakespeare, Milton and Mozart. There are direct quotes from these sources, but mostly the script contains subtle echoes of familiar passages. These serve as reminders that while this territory is plotted out, the tale of creation is still the most compelling story we have. So we return again and again to freshen it up, to make it newly entertaining.

It helps that the performance is genuinely funny, and that the script’s fluid transitions between vernacular speech and flights of Romantic poetry are performed by professional actors.  Ray’s cadre of humans-a Greek chorus and later a jazzed-up chorus line-sing wonderfully. (They are virtuosic, not just good relative to most “deskilled” performance art.)

The humans may be the supporting cast for most of the performance, but they are also the show’s real protagonists. They are us, after all, as a few poignant fourth-wall-penetrating glares from the stage affirm. We cheer when the stiff plaster creatures with numbers for names revolt against their servile fates. The rupture occurs when the Dionysian and the Apollonian realms are joined in a profound scatological cataclysm-the high and low point of the production. The humans’ bowels evacuated, they become craven, but essentially loveable, creatures pursuing newly discovered desires and intellectual faculties. Donning grotesque masks evocative of James Ensor or Otto Dix paintings, the humans fumble their way through the Enlightenment, goaded on by the tyrannical Vernon (Ryan Kiggell).

What follows is a tender vision of ugly, idiot humanity. The show’s misanthropy is always upbeat, even-or especially-when we know we are implicated. If the initial diagram were to be redrawn over the long arc of The Humans it might show how the Apollonian and the Dionysian have been transformed, through the interventions of the demigods, random accidents and the missteps of humanity, into the new concepts of good and evil. Yes, this is an opera about the human condition, one that grapples with curse of being and the horror of nothingness. We might groan at that idea, though it should really be inspiring that one young artist has given himself license to take up these threads. By raising the issues he does, Singh affirms that they belong to a common cultural inheritance, not just an aristocratic tradition. The Humans doesn’t offer new questions (much less answers) about life and philosophy, but it succeeds in underscoring how urgent the old ones remain.