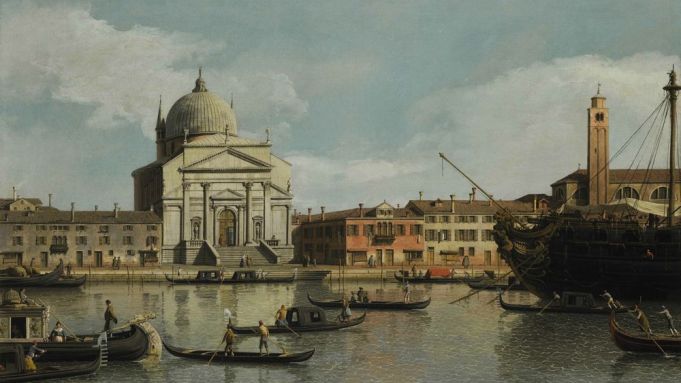 The old masters’ rocky performance at Christie’s on Wednesday was repeated yesterday with a halfhearted showing at Sotheby’s. Nearly half the lots, 141 of 350, failed to sell. The highest-priced offerings did well, helping to bring in a decent $62.1 million total and setting auction records for several artists, including Fra Bartolommeo, Simone Martini and Charles-Antoine Coypel.

Three paintings from the collection of Lord and Lady Forte, who amassed their fortune as hoteliers, were intended to be the sale’s stars; they met with mixed results. Canaletto’s Venice, A View of the Churches of the Redentore and San Giacomo, with a Moored Man-of-War, Gondolas and Barges (1747–55) fetched $5.7 million, the day’s top price. Pieter de Hooch’s Interior with a Child Feeding a Parrot, a charming domestic interior from 1672, painted during the artist’s time in Amsterdam, realized $3.7 million, far surpassing its $2 million high estimate. But the third offering from the estate, and the catalogue cover lot, Jan van Huysum’s Still Life of Roses, Tulips, Peonies and Other Flowers in a Sculpted Stone Vase, Together with a Bird’s Nest on a Stone Pedestal Before a Niche, an oil on copper painted circa 1718, which carried a presale high estimate of $6 million, failed to sell.

Several lots drew heavy interest from bidders and sold well beyond presale expectations. Fra Bartolommeo’s Saint Jerome in the Wilderness (ca. 1490), an arched panel depicting the saint on his knees in a craggy landscape, sold to a telephone bidder for $4.9 million, doubling its high estimate. A tondo attributed to Botticelli and studio, Madonna and Child with the Young Baptist, Saint Francis Receiving the Stigmata in the Distance (ca. 1490), brought $4.6 million from a telephone bidder, three times  its presale high estimate.

The final lot of the sale was another surprise. Coypel’s 6-foot-long Roland and the Marriage of Angelique (1734–7) garnered attention from several parties in the room and on the telephone and eventually sold to a telephone bidder for $3.6 million, quadrupling its high estimate.

(Final sales prices include Christie’s buyer fees. Estimates do not.)