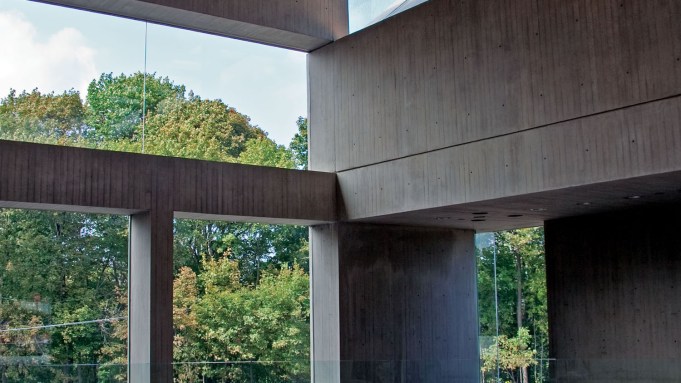 Cornell University, in Ithaca, N.Y., has just boosted its architectural profile with a sensitive expansion to the Herbert F. Johnson Museum, I.M. Pei’s concrete-and-glass modernist jewel of 1973, and the near-completion of the 48,000-square-foot Milstein Hall, a brand-new facility for the College of Architecture designed by OMA partners Rem Koolhaas and Shohei Shigematsu. It is a return of sorts for Koolhaas, who studied for a year at Cornell in 1972, when the Johnson Museum was under construction.

At 16,500 square feet, and a total cost of $19 million, the Johnson expansion, designed by Pei Cobb Freed & Partners LLP of New York City, is relatively modest, a separate wing of sorts with an entrance lobby, contemporary gallery, classroom and lecture hall, along with much-needed storage and office space. Care was taken to match the original materials, most notably the building’s warm gold-toned concrete and the abundant glazing that allows a mutual permeability of interior and exterior. The addition, with its increased storage facilities, permitted the expansion and renovation of the public fifth-floor galleries of the Pei building. There the museum’s renowned Asian art collection has breathing room in a cantilevered space that affords sweeping views of the campus and surrounding landscape.

Naturally, it’s the newbie that’s grabbing all the attention. Milstein Hall is downright thrilling, a slow burn of myriad nuances, from the clever organization of space in a limited footprint to lush surface treatments and futuristic technology. The school was pressed to consider a new building in 2000 after a stern accreditation warning for inadequate facilities. Eleven years and several scrapped proposals later—among them a plan by Stephen Holl that would have replaced the preexisting Rand and Sibley Halls, by contrast utilized in the OMA design, with a huge new building that ran afoul of just about everyone—the task is finally accomplished. Cornell opened the main studio and classrooms of Milstein-which wound up costing a relatively conservative $55.5 million—in time for the fall semester. The remaining spaces, most notably the auditorium, will be unveiled in March, accompanied by a two-day symposium on the building [Mar. 9 and 10].

Milstein centers on a half-buried domelike structure made of poured concrete. At ground level, deep porches cantilever outward to either side of the dome’s curved walls. Above is the vast architectural studio. Below are spaces for critiques, and slicing through the levels at a diagonal is a stepped auditorium. The dome is glimpsed in many ways, but never in its entirety. Standing beneath the porch, one sees its curved surface rising into the studio space, and partial views of it are afforded along staircases.

Outside, the underside of the cantilevered studio is covered with stamped aluminum panels, which makes the outdoor space feel like a room with an old-fashioned tin ceiling. Above and below the windows on the studio’s exterior are long cladding strips of luxurious Turkish marble striped gray and white, in a palette that harmonizes with the overall steel and glass. Studding the curved concrete of the dome are domelike seats that double as lights, illuminating the porches and entryways at night.

The cantilever design allows, for the studio’s interior, a huge open room whose ceiling is supported by exposed steel trusses in varying configurations. Windows run continuously along the perimeter, allowing abundant natural light to stream in, augmented by skylights. (The roof will be green, covered with sedum plantings.) OMA built the studio adjacent to Sibley and Rand Halls, with direct access to them. Sibley’s neoclassical yellow brick facade is partially incorporated as a visible wall; its upper story windows were transformed into doorways. On paper, it’s hard to believe that the earlier style could work with the steel-and-glass construction, but the mash-up is completely in tune with Milstein’s penchant for visual surprise.

The auditorium may be peered into through ground-level windows; within, state-of-the-art technology allows for digital projection without darkening the room. Seats can be reconfigured at a stroke into little tables for displaying models. At the proscenium level, trap doors open in the floor, with leather seats rising up to accommodate VIPs.

In fact, the sheer flexibility of the interior spaces is one of the building’s most notable features. Malleable spaces for crits are distributed throughout the building, often materializing via movable walls; high-tech video equipment allows live interactions with specialists anywhere in the world. Milstein is fun, right down to a brushed-steel restroom with men’s and women’s facilities nested into alternating undulations of a ribbon-shaped wall, and a windowed elevator so large that it doubles as a moving lounge, complete with a couple of chairs and an electrical outlet.

Knowing the environs of Cornell, Koolhaas surmounted the obstacles of hilly terrain, sacrosanct landmarks and crabby city officials. OMA has triumphed with a gem worthy of a winter’s detour.