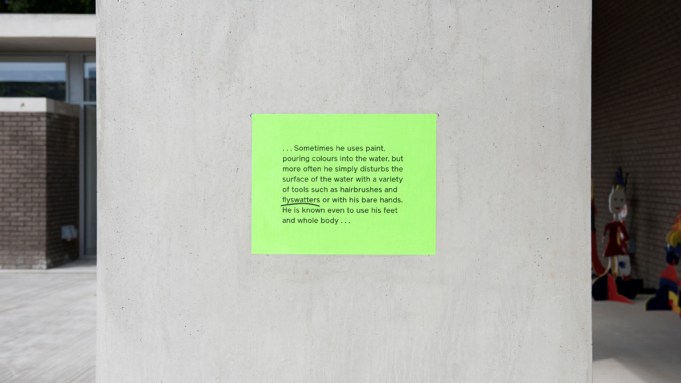 How can an art institution display or curate past performance or ephemeral art and preserve the work’s intent? How can a curator help to record and share the effects and meaning of an ephemeral work without stripping away the power that comes from its immediacy? I didn’t realize quite how much I thought the answer to that question was “they can’t” until I saw how it was done in “The Miraculous,” a show organized by Raphael Rubinstein, Maeve Redmond, and Sophie Dyer for the Edinburgh Sculpture Workshop. Exhibitions of ephemeral work tend to combine video or photographic documentation with texts about and artifacts from the original piece, in an attempt to overcome the limitations of the necessary transformation in medium. “The Miraculous,” however, boldly leans into this transformation. The show brings together works—like David Hammons’s Bliz-aard Ball Sale (1983), in which he sold snowballs from a blanket on a New York street on a winter day, and Joseph Beuys’s suggestion that the height of the Berlin Wall be increased by five centimeters, which scandalized West Germany—solely by way of Rubinstein’s written descriptions of them, taken from his book of the same title (Paper Monument, 2014). The result is a much better representation of art actions and ephemeral works than others I’ve encountered.

This is a big achievement for a small show. One could see the entire exhibition comfortably in twenty minutes. The presentation consists of twelve short texts, ranging in length from one to four paragraphs, typed in black and printed on green and orange fluorescent paper installed throughout the premises of the Workshop. The pieces vary in size and format. One of the texts is printed on stacked sheets of neon green letter paper. Another is spread over four poster-size sheets laid out on a table, while yet another runs down a fifteen-foot sheet pasted on a column in the Workshop’s courtyard.  Some of the texts include block prints of black-and-white abstract shapes, which have the effect of slightly destabilizing the texts’ authority, as they subtly draw attention away from the words.

Redmond and Dyer have also played with the formatting of the texts. In some places the kerning and fonts are off and uneven. Words and phrases are sometimes underlined or circled for no apparent reason. One piece, laid on a table in the Workshop’s archives, had a pair of small colored paperclips and a single nail on it when I visited. Though the placement of the objects seemed intentional, the archives were in active use, and the intervention was just small enough to make me wonder whether it had been an accident. Such moves, done sparingly, serve to keep viewers at a slight remove from the Rubinstein’s seductive prose, creating enough distance for them to recognize his authorial presence and the particularity of his perspective without disrespecting the power of his description.

Each text is a very short story told in clear, simple language, rather than the cerebral verbiage so common in the description of contemporary art. Rubinstein almost completely refrains from critical analysis. One particularly brief entry reads:

In 1979, an artist decides to shake hands with every employee of the New York City Sanitation Department. It takes her eleven months and two days to shake the hands of all 8,500 workers.

Some readers will recognize this as the work of Mierle Laderman Ukeles, but Rubinstein’s descriptions never name the artists, nor do they always cite years or cities as the one about Ukeles does. The book version of The Miraculous has an index at the back, but it is cheekily, purposefully difficult to use, giving the sequential number of the entry rather than the page it is on. These days so much art production seems invested in making meaning from an artist’s social milieu, institutional background, and place of birth or residence. But by eschewing much of this contextual data—and, with names, any kind of “brand recognition” or market position—the book does a beautiful job excavating the miraculous and sublime essence of aesthetic experience. Rubinstein’s contextually vague but narratively rich evocations of art practice induce a sense of awe that makes the works feel powerful even in their absence.

In the book, as in a Borges story, the wondrous and the beautiful seem to belong to a lost or distant world. At the Workshop, Redmond and Dyer’s transformation of Rubinstein’s descriptions into site-specific installation gives the words an invigorating immediacy. “Site-specificity” is often a mere buzzword used to justify unconventional exhibition methods. The curators of “The Miraculous,” however, treat site-specificity as a means to engage with the production of meaning; using spaces throughout the three floors of the Workshop, they render the book’s magic in a less mythic and more earthly mode. To fully experience the show, you have to move through active studios for sculptors in residence, curatorial offices, and a café. One of the posters is in a conference room used by the curators and managers and is visible through a glass door. If a meeting is going on, you can either interrupt to look at the piece or gaze at it from outside.

Reflecting the idiosyncrasy of the book’s index, an exhibition key identifying the artists described in the texts is given not as a gallery handout but on a wall in a corner of the building and is organized in a random order that makes it hard to use. The building’s layout is somewhat difficult to navigate at first, so you wander a bit and get lost. While the fluorescent posters guide you through the spaces, the lack of contextual references descriptions produces a level of disorientation.  Ultimately, the installation, although tied to the specific architecture of the Workshop, suggests a kind of liberation, proffering a world filled with artistic creation and intervention.

By summarizing artists’ works, Rubinstein is in danger of dominating the meaning of the art that he collects through his writing. Of course, every curator takes this risk; Rubinstein’s framework is just more unconventional than the white box we’ve been trained not to notice. But “The Miraculous” does not claim to make a definitive statement on any of the art it includes. And so it ought to be recognized as a new work built on and in dialogue with the older works it assembles, intervening in established traditions of display while preserving something vital of the art itself.