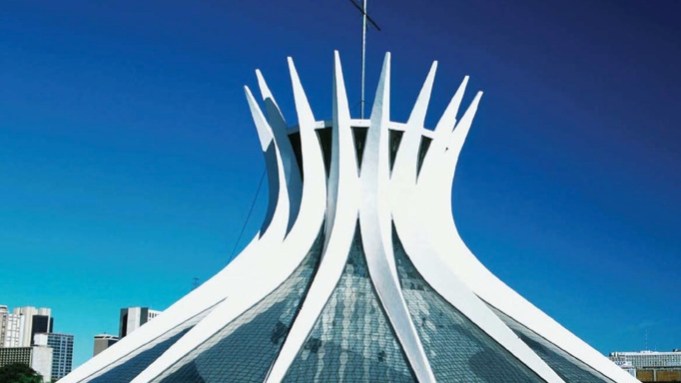 Legendary architect Oscar Niemeyer will turn 104 years old this December, and age hasn’t slowed him down at all. The arch-modernist, who collaborated with Le Corbusier to build UN Headquarters in New York, designed and planned the entire city of Brasília, and gave sensuous feminine curves to so many of his international concrete monuments, unveiled a new arts center, the Asturias arts complex in Avilés, Spain, earlier this year.

Last week, at a gallery not far from his studio in Rio de Janeiro, he launched his latest monograph, As Igrejas (The Churches) (Editora Nosso Caminho), a retrospective of designs for 16 holy structures both realized and unrealized. He plans to soon announce two new projects, a community center and yet another church. His Igreja de Pampulha, in the Belo Horizonte region of Brazil, built in 1943, comprises bold, even cartoonish undulations and a bell tower like an outsized dagger struck into the earth. His drawing for a Capela Roberto Marinha is an asymmetrical coil that’s primarily underground, with an illuminating Miro- or Matta-Clark-like slit in its side.

“I continue to work without pause,” Niemeyer says. “Architecture still appeals to me, since I’m always chasing a different solution for each project. And that excites me. It’s a permanent struggle against repetition and monotony.”

Niemeyer’s involvement with religious buildings might seem odd, he recognizes, since he has been an active communist and an atheist since at least 1927. By the age of 20 he was actively participating in a political group called Socorro (“Aid”), which distributed food and clothing to the poor. He later served various official roles in Brazil’s communist party, including as its president in the ‘90s. “I think that Marx’s dream—the advent of a classless society, of a world where our great social divisions will be overcome—is still present in the hearts of many men,” he says.

But he is glad the buildings hold special meaning for others, and as one of the official architects of his country—when not in exile, as he was during the country’s military dictatorship of the late ’60s—and one of the high priests of 20th century global modernism, he’s had plenty of opportunities to transform space along the lines of his other-worldly vision of the future.

“I think one can recognize there that lighter, more personal architecture, capable of provoking surprise,” Niemeyer says. “It’s the architecture I’ve been seeking out for more than 60 years.”

Niemeyer is one of the last true modernists. His approach has its origins in a time when men believed in our power to consciously remake the world according to a new set of values, when we might flatten mountains, build entirely new cities, all in service of a better and radically different future.

He trusts in “the capacity of humanity to transform the world and advance history,” he says. “It’s important to rise above the dominant negativity in this epoch, in which so many important beliefs—most of all political beliefs—have been cast aside.”

The Asturias is characteristically bold and utopian. His hallmarks are bold forms, often set against cavities for stunning contrast; sinuous pedestrian ramps, and curves suggesting the femininity of the natural works. The grandest example of his ambition is Brasília, the capital city conceived and built from scratch on the empty Central Brazilian plains. The buildings’ audacious curves and the streets’ rational grid is set against the blankness of the surrounding terrain. Decades later, the city is still awe-inspiring, while the planning model makes it a strange, if not difficult, place to live. “Creating a new capital in the central plateau was an important and brave initiative that brought progress to the interior of Brazil,” he says. “And it was built in record time, with the greatest amount of enthusiasm, under the leadership of a real statesman. It’s possible that such a feat is difficult to repeat…”

Niemeyer’s age has not kept him much out of the public eye-earlier this year, he posed with Kate Moss for Vogue Brazil. “I’m a bit tired of doing so many interviews at the moment,” he says. “I want to work in a calmer fashion for a while, without too much interruption.”

RS Recommends: This Surprise Fitbit Sale Gets You the Top-Rated Fitness Tracker from $60