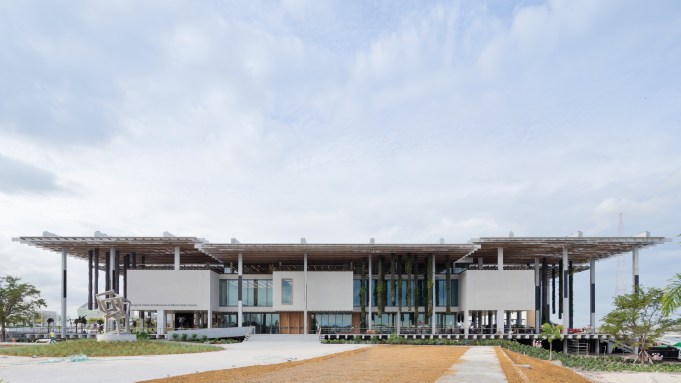 “Are you going to close down now?” joked Dallas-based collector Kenny Goss, who had bought one of the sculptures, as he walked by.

While much of the attention during Miami Art Week may go to the Art Basel Miami Beach (ABMB) fair, with its celebrity visitors and millions of dollars’ worth of sales, other fairs and nonprofits are drawing crowds and offering various art experiences.

NADA, located in the Deauville Beach Resort hotel at Collins Avenue and 67th Street, opened its doors at 10 a.m. Thursday, drawing a fervent crowd. With 76 exhibitors and 18 artists’ projects, NADA celebrates its 10th anniversary this year and runs through Dec. 8.

“The younger galleries who exhibit at this fair are so experimental and yet so serious at the same time,” collector Anita Zabludowicz told A.i.A. in the stand of New York’s Clifton Benevento. “These are the future David Zwirners of the world.”

Situated just near the entrance, New York nonprofit Independent Curators International was doing a bustling business a half-hour into the preview, Bridget Finn told A.i.A. Among her sales, she had sold two large John Baldessari prints from 1990, never before exhibited, for $2,500 each, and two Liz Glynn editioned necklaces in various metals for $1,500.

“I think it was brilliant of NADA to open today two hours before Basel opened, because it gave everyone a chance to visit here first,” Finn said. The busting crowds supported her point, and collectors like Zabludowicz, Bed Bath & Beyond founder Marty Eisenberg, and Michael and Susan Hort were seen sweating it out in the under-air-conditioned hotel.

“What really sets NADA apart is that it is organized by a nonprofit,” director Heather Hubbs told A.i.A. during the preview, “which means we don’t charge admission, and there’s no tiered VIP system like you find at other fairs.”

She stressed that the fair encourages participation by other nonprofits, and pointed out that this year’s roster includes more of them than in any previous year. Among them are ICI, Studio Voltaire (London), Midway (Minneapolis), Locust (Miami) and Creative Growth (Oakland).

House of Voltaire, a pop-up shop organized by Studio Voltaire (which has studio space for artists and organizes public programming), was offering various multiples in a wide price range, from Garnet McCulloch’s $20 Skull Shot, a handmade glazed ceramic shot glass in the shape of a skull, to a Rosemarie Trockel digital print in an edition of three, donated by the artist, for $60,000. Wearing Propaganda shows a woman’s figure; a Lacoste sticker is affixed to the surface.

An artist project by NewYork’s Devon Dikeou, meanwhile, set in its own stand among the gallery and nonprofit booths, gently satirizes the tenuous economics of art nonprofits. Titled “Pay What You Wish But You Must Pay Something,” the booth is wallpapered with an image of the controversial sign listing “recommended” admission prices at New York’s Metropolitan Museum of Art. The title echoes the museum’s de facto admissions price policy. The booth contains replicas of donation boxes from various U.S. nonprofits; all money deposited in them will go to the respective institutions.

New York’s Marlborough Chelsea was selling at a much higher price point than some of its neighbors, displaying artists like Mike Bouchet, Andrew Kuo, and Davina Semo and Tony Matelli. “All are sold or under negotiation for anywhere from $9,000 to $100,000,” director Pascal Spengemann told A.i.A. A bystander joked, “And you know which one costs $100,000,” referring to Matelli’s 8-foot-tall bronze sculpture of a house of cards that stood at the booth’s center. “You never know,” Spengeman said, slyly.

Meanwhile, across the bay, a museum opened Wednesday that may change the artistic landscape of Miami. The Pérez Art Museum Miami was renamed from the Miami ArtMuseum after a $40-million gift from real estate developer Jorge Pérez. The 30-year-old museum re-opened Wednesday in a 200,000-square foot, $131-million building designed by Herzog & de Meuron and overlooking Biscayne Bay. The new building features striking exterior architecture based on local houses that are elevated on stilts; hanging gardens designed by botanist Patrick Blanc; and graceful, commodious galleries.

“The architecture is defined by minimal, geometric shapes warmed by wood and concrete,” chief curator Tobias Ostrander told A.i.A. in a phone conversation today. “It has a very tropical feel but it also has a European sensibility and an evocation of Louis Kahn.”

The museum has historically drawn about 50,000 visitors annually, deputy director Leann Standish told A.i.A. during a walkthrough on Thursday. That’s the same size as the crowd summoned by the five-day ABMB fair last year. Projected annual attendance numbers in the museum’s new home are four times that figure, Standish said.

While the museum’s name change caused some controversy, and resulted in the defection of several board members, Ostrander minimized the fallout.

“I think at the core of the controversy is a conflict between wanting this to feel like a public museum, and the fear that the name will imply that it is private. But more than half of the money that supports the museum comes from the taxes of the people of Miami-Dade County. The name is less important than how we activate the space and engage with our community.”

The museum’s main inaugural exhibition is “Ai Weiwei: According to What?” (through Mar. 16, 2014). Among the most affecting works here are those that focus on the children killed in shoddily built schools during the 2008 Sichuan earthquake. It’s the kind of work that brought the ire of the Chinese authorities and led to his 2011 arrest and 81-day detention, and it still stings.

“We’ve tried to highlight him as a figure in a post-Communist world, which speaks to the Cuban community in Miami, as well as to people from other countries in the Americas that have undergone tumultuous political transitions,” Ostrander said. “He’s involved in cross-cultural translation, which is what our public does every day.”

Just a few blocks from the convention center where ABMB is housed, meanwhile, is Ink Miami, a fair for works on paper, housed in a number of hotel rooms around a central courtyard at the quiet Suites of Dorchester (1850 Collins Avenue). At Ink, 16 American exhibitors show 19th and 20th-century works on paper. The price point is generally more modest than at the other fairs; there are many enticing prints on offer in the range of hundreds of dollars. You can spend real money, though: Catherine Burns, of Oakland, Calif., is offering Mary Cassatt’s Peasant Mother and Child (1894), an aquatint and drypoint, for $275,000.

But a single work by Boston-based artist Emily Lombardo at Boston’s Childs Gallery offers an acidic critique of art market excesses. Based on a print from Goya’s satirical series “Los Caprichos,” the 9-by-6-inch etching and aquatint shows several figures seated around a plinth atop which rests a large version of an infamous work by Damien Hirst. The caption reads, “What a diamond skull!” At just $700, three of the edition of 12 were sold when A.i.A. stopped by Thursday afternoon.