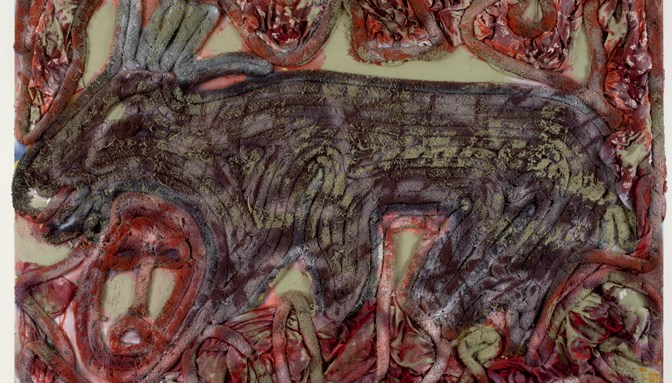 An annual celebration of self-taught artists, the Outsider Art Fair in New York [February 10–13], has picked up some of the steam it lost to the general economic downturn.  This year’s installment, the 19th, kicked off with a high-energy vernissage benefiting the Creative Growth Art Center and the Fountain Gallery, institutions in Oakland and New York, respectively, dedicated to the work of mentally and physically handicapped artists. Some 33 galleries from the U.S. and abroad specializing in Outsider works converged at 7 W. 34 St., the commercial space that hosted the event for the third year in a row. Participants this year ranged from Marcia Weber Art Objects based In Montgomery, Al., to Galerie Christian Berst from Paris.

Among the splashiest presentations were those introducing new artists to the field. A serendipitous dumpster dive led to a remarkable trove indicative of the fair’s unique charm. A hand-sewn album containing 280 crayon, pencil and ink drawings by an anonymous artist dubbed the “Electric Pencil” was picked from the Springfield, Missouri trash by a 14-year-old boy in 1970. He held onto his find for nearly 40 years until he sold it. After a bout on eBay and transfers through several collector-dealers, the intact album passed into the hands of New York artist-dealer Harris Diamant.

The drawings are rendered on both sides of 140 ledger sheets, most of them bearing the printed name “State Hospital No. #3” A great deal of speculation as to the identity of the artist has proceeded: Diamant went so far as to hire a private detective, with one persuasive theory being that he was a young man from Missouri, committed at age 17 by his father for chronic disobedience in the early 1900s and not released until he was in his 70s.

The work employs a visual vocabulary that includes trains, circuses, boats and animals, but it is a series of portraits that set the “Pencil” apart from all other Outsiders. Deceptively quaint and childlike on first glance, the subjects are framed by borders reminiscent of those on carte de visites, complete with phonetically spelled labels and ornamented with furniture and fanciful hats. Most of the figures face the viewer straight on; noses are delicately modeled by gray pencil shadings, and the lips are thin and expressionless. The eyes are drawn wide with constricted pupils. Arresting the viewer with their intensity; it is almost as if the eyes are where the artist began each portrait, filling in the other features around them.

A large selection of the double-sided drawings were offered for sale, and several sold at $12,000 each. It is sad to have this unique body of work broken up without the protection of an estate, but Diamant published the collected works in book form. The Drawings of the Electric Pencil contains reproductions of the complete album and includes an essay by Art in America contributor Lyle Rexer.

If Iowa City won’t be represented at next month’s Armory, it was here—and effectively—by the city’s Pardee Collection, whose booth featured drawings by developmentally disabled artist, Jim Work. Work depicts bridges, farm buildings and water towers, often using a bird’s-eye perspective. He renders lengths of multiple lane highways complete with overpasses, roadside buildings, directional arrows and dotted lines, sometimes creating continuous, scrolled landscapes on taped together grocery bags and found paper that can stretch anywhere from 4 to 250 feet. His crayon palette is bright and appealing, and he painstakingly works his surface coloring one square inch at a time, slowly burnishing each with the edge of a popsicle stick to achieve a smooth polished effect.

Not every artist on view at the Outsider Art Fair suffers from a disability, or is a discovery. Chicago’s Carl Hammer highlighted a gorgeous Bill Traylor of a big red dog bracketed by silver foil strips leftover from the previous incarnation of the recycled desk blotter he often drew on. The work was priced at $350,000. The gallery also presented a particularly fine collection of Eugene von Bruenchenhien’s futuristic paintings and homespun chicken-bone sculptures that complement the show of the artist’s work currently on view at the American Folk Art Museum in New York [through Oct. 9th]. Just Folk of Summerlands, Calif., brought an extraordinary William Hawkins relief painting from 1989, a cityscape with a $135,000 price tag, Neil House with Chimney #2 features a large construction that looks like a blue-and-white trellised tower attached to its left edge.

Many of these artists are isolated, either by choice or by circumstance, and the opportunities to see their work would be non-existent without the intervention of committed dealers. With better vetting in recent years and a worldwide roster of dealers showing both masterworks of the genre and newcomers to the field, the Outsider Art Fair might lead audiences to teach themselves a new canon.

SEE THE ART IN AMERICA PROFILE OF ANDREW EDLIN, A DEALER AT THE OUTSIDER ART FAIR.