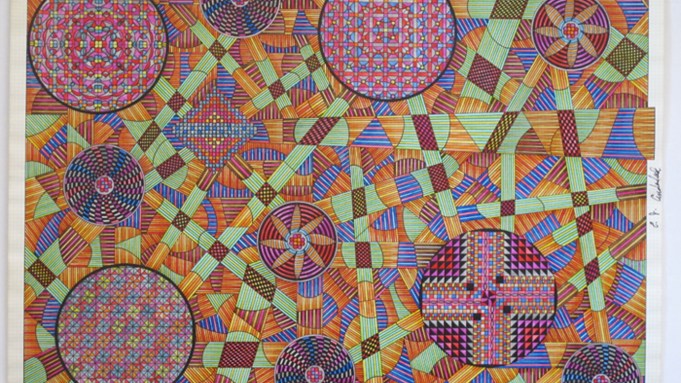 Just a few months into her new job as the curator of folk and self-taught art at the Smithsonian, Leslie Umberger traveled to New York to visit the latest incarnation of the Outsider Art Fair. Before joining the Smithsonian last September, Umberger was a curator at the John Michael Kohler Arts Center in Sheboygan, Wisconsin, for the past 14 years. She organized more than 50 exhibitions there, and has long been interested in “environment builder” artists like Albert Zahn and David Butler, both of whom were represented by various galleries at the fair.

Held on three floors of Chelsea’s Dia Building, this year’s OAF, organized for the first time by dealer Andrew Edlin, was slicker than previous outings. Several dealers were overheard chatting approvingly about the airy new digs and the benefits of being in the heart of the New York gallery scene; accordingly, the opening last night was jammed.

Like most people in the field, Umberger begrudgingly accepts the descriptor “Outsider art,” which, over the past few decades, has become the umbrella term for work created by self-taught artists of all stripes. “People accept ‘Outsider’ as a bitter pill,” Umberger explained. “I’d like to see it done away with. It marginalizes artists who learned in a different way, who had different goals and agendas, and a different relationship with the market.”

Despite her frustration with the way Outsider art is viewed, Umberger still came across plenty of old favorites and new discoveries among the nearly 40 galleries who had booths at the fair.

Carl Hammer, Chicago
Given a prime location in the middle of the 4th floor, Carl Hammer’s spacious booth was stocked with some of Outsider art’s greatest hits. Umberger was immediately drawn to a pair of spectacular landscapes by Joseph Yoakum, who influenced many Chicago-area Imagist painters. Yoakum labels his paintings with far-flung geographical locations, though it’s widely believed that all of his travels are imaginary and that he never left Chicago.

The gallery also showed work by Frank Jones, known for his two-tone colored pencil drawings (usually blue and red or green and red) of stacked geometric house forms filled with spirit figures. “He was in prison twice, and died there during his second stay,” explained Hammer. “He only made art while in prison, and the rooms of his houses are like cells in a prison. He also sometimes includes a clock image, to represent the time he was serving.”

More contemporary work was also on view, most notably Eugene Andolsek‘s uber-colorful ink-on-graph paper paintings. Chatting with dealers about both the obscure and well-known artists they represent is especially enlightening at the OAF, as many of them have taken tragic and circuitous routes into the art world. Andolsek, who had a dead-end clerical job with the railroad for most of his life, spent his free time mixing his own colored inks with an eyedropper and painting psychedelic artworks at his kitchen table. He ended up at an old-age home in Pittsburgh, where he suggested they use his paintings as placemats; fortunately, one of the employees thought better of this idea and contacted an in-the-know curator visiting the Warhol Museum, thus allowing Andolsek to enjoy a few years of fame before his death in 2008.

Ricco Maresca, New York
Spotting a few drawings by George Widener, Umberger darted over to Ricco Maresca’s booth. “I’ve become extremely fascinated with this artistic savant,” she said, explaining his obsession with calendars and numerology. Each of the scroll-like pieces, often made on paper towels or napkins, features overwhelmingly complex layers of numbers and dates. London’s Henry Boxer had a large Widener drawing related to the Titanic, one of the artist’s long-running obsessions (brought about by his discovery that a drowned passenger shared his first and last names).

Gilley’s, Baton Rouge
At Gilley’s, Umberger spotted some animal whirligigs by David Butler, an old favorite among the environment builder artists she has focused on since her time at the Kohler. “Butler saw these painted-tin animals as protective amulets, and transformed his entire home into a whole artwork inspired by old-time religion and voodoo.” Umberger recounted that Butler fell victim to the over-collecting-verging-on-looting that was prevalent during the 1980s. Milwaukee-based Dean Jensen‘s nearby booth also had a pair of his animals in good condition, a hen and a rooster.

Cavin-Morris, New York
Cavin-Morris’s booth was chock-full of work by artists both familiar and new to Umberger. J.B. Murray, “a classic African American spiritualist artist,” was an instant draw, with his colorful, mostly abstract paintings. Murray, explained Umberger, practiced glossography, or “writing in tongues”: he’d enter into a deep religious state and felt God telling his hands to draw the spirit figures, illegible text and “emotive moments” that dominate his work.

Galerie St. Etienne, New York
St. Etienne’s Jane Kallir was widely praised by Umberger and others who stopped by for the detailed timeline of Outsider art she installed along the upper edge of her booth’s three walls. Starting with the self-taught Henri Rousseau’s inclusion in the “Fauves” exhibition in Paris in 1905 and ending, in 2012, with news of MoMA’s acquisition of 13 works by Henry Darger and a new director for the American Folk Art Museum, the timeline reinforced the argument that Outsider art has never been as “outside” as many in the art world believe. In addition, the booth featured some classic examples by artists like John Kane, Grandma Moses, Martin Ramirez, Bill Traylor and Adolf Wofli.

12 Essentials to Take With You on Your Summer Yacht Vacation