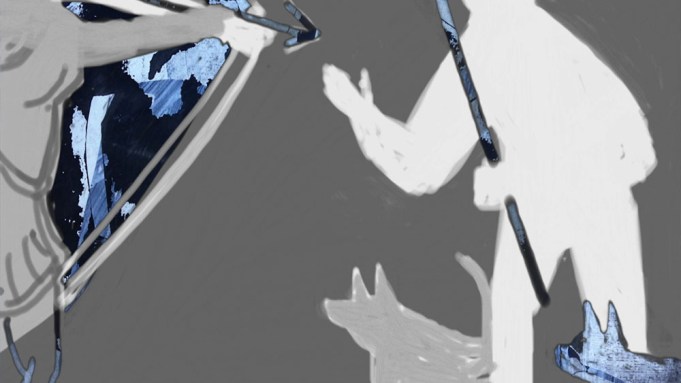 Amy Sillman’s exhibition “After Metamorphoses,” currently on view at New York’s Drawing Center, unites painterly processes and digital techniques to attend to transformations both mythical and decidedly real. The exhibition consists of an animation of the same title, projected in the darkened downstairs gallery, which takes Ovid’s Metamorphoses as inspiration. Condensing the epic poem’s fifteen-book narrative into a five-minute looped video, After Metamorphoses (2015–16) has an almost manic rhythm, somewhat calmed by German musician Wibke Tiarks’s soundtrack.

The video comprises abstract drawings layered beneath animated imagery drawn by Sillman on an iPad. A bear (once the nymph Callisto, transformed by a jealous Hera) and an owl (previously Ascalaphus, punished by Persephone), along with pigs, snakes, and people, are rendered in simple, formally eloquent sketches in shades of gray and faded blue, green, and beige. These characters constantly undergo strange and sometimes comical mutations: In one scene, a woman retches and her vomit transforms into three rodents, which sprout babies’ heads before finally turning into flowers. Mushrooms become humans. Bodies come apart in pieces and dissolve into the background. The transformations mirror the movement between figuration and abstraction in the video, an oscillation that characterizes Sillman’s practice more broadly.

The press release notes that Sillman refers to After Metamorphoses as an “animated drawing” rather than a video, which suggests that its concerns are primarily with form and gesture rather than new media. Unlike an untitled animated video by Oliver Laric from 2014–15, which is similarly dedicated to transmutation but draws from preexisting cartoons and digitally modeled figures, Sillman’s piece eschews critique of the technological image, instead emphasizing her painterly sensibility. She layers different styles of mark-making—digital drawings alongside handmade ones-to explore the continuity, rather than the disjuncture, of these modes within the narrative frame.

Two earlier animated videos, composed entirely of iPad drawings, also use poetry as their narrative backbones. Draft of a Voice-Over for Split-Screen Video Loop (2012) is set to a poem by Lisa Robertson that deals with gender and femininity, major concerns of Sillman’s practice. Her imagery is more explicitly figurative here and, though not precisely illustrative, closely follows the text, which the artist reads aloud. In Sillman’s 2011 collaboration with poet Charles Bernstein, Pinky’s Rule, overlapping images of arms, faces, and whole bodies (humans, horses, birds) are layered over planes of bright color, generating a sense of movement as figures are sequentially erased and redrawn across the screen.

In both works, as in After Metamorphoses, drawing functions not only as a material process but a bodily one: the motion of the artist’s finger across a touchscreen is palpable. Sillman’s embrace of color and hand-drawn, exploratory marks in these videos-as well as her engagement with text as an underlying structure-place her in dialogue with artist and poet Jackson Mac Low, whose concrete poetry drawings are exhibited in the galleries just above Sillman’s show at the Drawing Center. Sillman’s exhibition is enriched by this contextualization. Indeed, Clarinda Mac Low, the artist’s daughter, recalled in a recent talk that Sillman’s work hung alongside her father’s in her childhood home.

“After Metamorphoses” also features the eleventh issue of Sillman’s zine, The O.G., which shares the Ovidian theme. The cover features a long, thin figure, roughly sketched in charcoal, kneeling defeatedly and vomiting. A speech bubble containing the hashtag “#currentmood”—much like the one bursting from the center of Sillman’s January 2017 cover for this magazine-hovers near the figure’s upper back. In both instances, the hashtag seems deeply informed by the political situation, though the mood illustrated on the cover of The O.G. #11 appears less inclined to anger than to disgust and despair.

Similar charcoal sketches occupy roughly the first half of the zine: drawings of bent figures, rendered in thick, choppy marks, hover near the bottom of each page in various stages of distortion, excretion, and subtle transformation. The latter half, by contrast, features abstractions in black and shades of red and pink, an occasional appendage poking through the layered grounds. As in much of Sillman’s recent painting, abstraction confronts figuration, with bodies appearing in awkward, unexpected manifestations. The O.G. #11, like After Metamorphoses, evinces an interest in “bodies changed into new forms,” as the first line of Ovid’s epic has it, and furthers Sillman’s ongoing concern with body politics and the malleability and messiness of gender. Moreover, what she describes in the zine’s introductory text as a “total fascination with a structure of endless change” in Ovid’s work also characterizes the frenetic pace of her video.

Sillman describes the video as “an almost readymade animation” drawn from Ovid’s accounts, but also situates the project in direct relationship to Trump’s inauguration and the attendant rise of a neofascist regime in the United States. The idea of change is crucial to all of the work in the show—not only in the Ovidian sense of transformation from one being to another but also on a larger scale, in the transformations the American public must undergo in order to resist the extreme escalation of capitalist violence we now face. In particular, Sillman asks what changes the artist must undertake to confront the increasing dangers of the current administration. Should she continue to make work, or stop? Should she renegotiate her relationship to art or to the world of fairs and deals and social climbing that sustains it? In search of answers, Sillman turns to a classical text that engages themes of love and cruelty, power, fantasy, and truth, and insists on the alterability of all things. Considered alongside the zine, Sillman’s video takes on a greater sense of urgency, its painterly concerns of representation and change revealing their political valence as well.