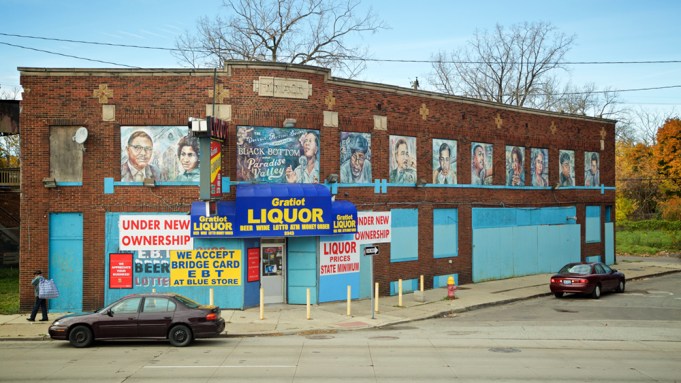 The Big B Liquor Party Store, which holds down the northeast  corner of the intersection of Trumbull Ave and the I-94 freeway in Detroit’s Woodbridge neighborhood, has taken on a different character of late. The third-story windows on the eastern facade, once boarded up, now display a series of recognizable figures. It’s a collection of Detroit-born poets and publishers, the second cohort of figures in artist Nicole Macdonald’s “Detroit Portrait Series”–an ongoing public art project.

Macdonald’s intention is “to tell the history of Detroit from the ground up, honoring leaders and everyday heroes from the city’s past and present through large-scale portraiture,” and using completed panels to board up windows in abandoned buildings throughout the city. The series at the Big B features activist writers and minority publishers from Detroit: Robert Hayden, the first African-American to be named poet laureate of the United States; Sixto Rodriguez, musician and subject of the 2012 breakout hit documentary, Searching for Sugar Man; Terry Blackhawk, poet and founder of the InsideOut Literary Arts Project; and others. This series was first installed in the main shed of the Detroit Eastern Market last summer, accompanied by a series of readings and workshops, and its permanent installation at the Big B coincides with an exhibition featuring Macdonald’s latest series, which features cultural activists and entertainment legends of Detroit’s Black Bottom and Paradise Valley neighborhood.

Founded in the early twentieth century, Black Bottom and the adjoining entertainment district of Paradise Valley (known as “the Harlem of Detroit”) were wellsprings for African-American self-sufficiency and cultural innovation until they were razed in 1950s. This not-so-coincidentally dovetailed with the construction of the I-75 and I-375 freeways, which cut directly through the neighborhood’s main corridors, especially Hastings Street, the site of many of the 350 black-owned businesses that operated in Black Bottom and Paradise Valley during the neighborhood’s peak.

Some of this history is well-known, but much of it has been obscured, both as a passive consequence of the physical violence done to the neighborhood in the course of its transformation, as well as in a concerted effort to suppress narratives that might challenge the idea of Black Bottom as a slum that needed to be destroyed for the public good. This elided history includes the pre-Motown impact of Detroit’s musicians on American music, the influence of Detroit’s political organizers on American resistance movements prior to the Black Panthers, and the emergence of a strong black middle class for the first time in the northern United States. Key figures who contributed to the character of our nation have attained new visibility through Macdonald’s large-scale portraits.  Works from her new series are featured in an exhibition in the lobby of the Boll Family YMCA, in downtown Detroit, where they greet members and visitors as they enter. (The show is on view through February 28; a reception was held on February 1, the anniversary of the ratification of the Thirteenth Amendment, which abolished slavery.) Subjects include big names and lesser-knowns from Black Bottom’s heyday: Billie Holiday, John Lee Hooker, and Aretha Franklin, pioneering black record producer and shop owner Joe Von Battle, longtime civil rights organizer Ron Scott, and many others

The smell of chlorine from the downstairs lap pool permeates the air in the YMCA’s lobby, where five of Macdonald’s huge paintings on plywood are propped up on easel backs made of two-by-fours. The exhibition also includes small-scale, printed versions of the other ten portraits the series; the originals are installed above another liquor store on Gratiot Avenue, the historic boundary of Black Bottom. Her work is rarely displayed at eye level, so this show is an opportunity to see the craftsmanship that Macdonald invests in each piece before leaving them to weather the elements. The figures, which sit comfortably in upper-story windows, loom much larger when one stands directly before them, and Macdonald’s impressionistic method becomes clear as the viewer draws close enough to their surface to see the subjects as abstract mélanges of brushstrokes. Macdonald has numerous bodies of work that create taxonomies of Detroit natives in public spaces–such as “Birds of Detroit,” a series of stencils portraying avian species that have proliferated in Detroit– and her comfort with street art and ongoing practice as a mural painter have well-equipped her to work comfortably at a large scale, creating visuals that are as satisfying from thirty feet away as they are at thirty inches.

When I met Macdonald in the Boll Family YMCA lobby to discuss her work, she immediately rattled off a list of changes that she noticed on her walk through downtown Detroit from the coffee shop. Macdonald has a lively curiosity about the city where she was born and raised. Her efforts to uncover and showcase hidden histories hardly preclude her keen observation of the present-day narratives unfolding to create another layer in the strata of urban development. The appearance of her work in locations that are free and accessible is a key component of her process; it is Macdonald’s wish to return these narratives to the people who lived them.

Macdonald is asceticism personified: quiet, extremely focused, breakably slender. Her work ethic and her desire to constantly shift attention from herself to the subjects of her portraits reflect the heart of Midwestern humility that beats within the old guard of the Detroit art scene. After our meandering conversation, she calls me to make the sobering addendum that she views the 1954 razing of Black Bottom as “a crime against humanity.” The so-called “slum clearance,” supported by eminent-domain land grabs for public-works projects like the interstate highway system, displaced and dismantled some of the most thriving African-American communities in Detroit, as elsewhere. Those who point to the Detroit Race Riot of 1967 (more commonly known as “The Uprising,” among communities within the city limits) as the major psychic wound of the city are missing the seeds that were planted and driven into the earth by the bulldozers that tore apart Black Bottom thirteen years earlier.

But sometimes seeds planted with pain and sown in sprawling decay yield beautiful flowers. Macdonald’s portraits are the colors of Detroit: chicory blue, verdant green, rusty reds, grays, browns, and of course, black. As we go about our daily life as Detroiters–corner store, gym, bus ride–it is energizing to be reminded that we walk in the footsteps of titans, that our histories and theirs are still alive and being written, and that someone is paying close attention.

Joe Rogan Claims He Refused to Interview Donald Trump: ‘I Don’t Want to Help Him’