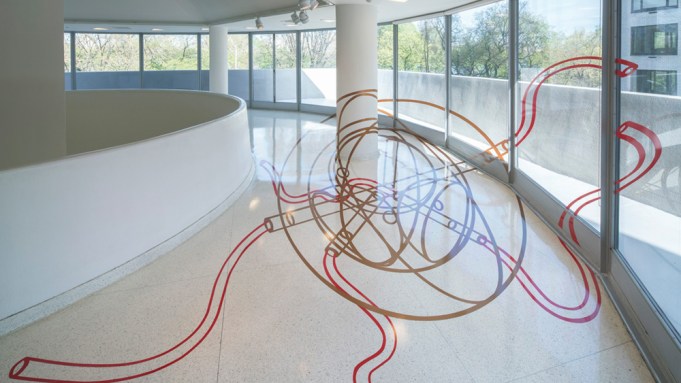 “But a Storm Is Blowing from Paradise” at the Solomon R. Guggenheim Museum in New York is a worthwhile, if regrettably diverse show. Curated by Sara Raza, the third and final iteration of the Guggenheim’s UBS MAP Global Art Initiative—an effort to incorporate works from underrepresented regions in the museum’s exhibition programming and collection—features eighteen works from seventeen Middle Eastern and North African artists, including seven women and one Israeli. The show is shot through with the certain insidiousness inherent in the concept of diversity, namely its predication upon a precision politics of identification and representation, and the way it mobilizes and instrumentalizes the margins to prop up the center.

Perhaps this “rapidly evolving” region, to quote the press release, is no longer inexorably hurtling toward progress but toward the art market—or perhaps those two things have always been one and the same. Like previous editions of the UBS MAP program, which highlighted art from South and Southeast Asia in 2013 and from Latin America in 2014, “But a Storm Is Blowing from Paradise” is an acquisition show-and-tell that puts the museum’s newest purchases on display. As such, it tends toward being a checkout-line sampler CD of Middle Eastern art-world preoccupations, including the archive, the postcolonial hangover as expressed in brutalist architecture, and the ever-present Lebanese Civil War.

“But a Storm Is Blowing from Paradise,” with a title drawn from Walter Benjamin’s writing on Paul Klee, tempts us to find resonances between the rise of Fascism and the proliferation of ISIS, or to map the bell curve of interwar revolutionary potential to the brief window of optimism after the Arab Spring. (The show spans two floors of the museum’s tower area, which means viewers must step out into the magnificent Moholy-Nagy retrospective to traverse its sections—but there the past figures as palate cleanser rather than parallel.) Raza’s show shares a title with Iranian-born, Dubai-based Rokni Haerizadeh’s deliciously absurd paintings over YouTube stills of news events. Haerizadeh’s works slyly subvert perception of a number of the recent uprisings with grotesque human-animal hybrids that embody the ugliness of absolute power.

It’s as tempting to look for labor critiques as it is to pan for historical references. Many of the artists are signatories to the boycott of the Guggenheim’s planned Abu Dhabi branch on Saadiyat Island organized by the activist group Gulf Labor, and participants in its advocacy for worker’s rights. The museum broke off negotiations with Gulf Labor a scant two weeks before the opening of “But a Storm,” and the artists’ willingness to be shown at the Guggenheim in New York feels opportunistic at best.

But more interesting than any overt statements on geopolitics is the emphasis on circulation of both bodies and ideas, and the way the exhibition reframes diaspora in terms of a distributed Middle East. This concept takes form in Building (2009) by the German-Egyptian artist Susan Hefuna, a record of psychogeographic wanderings through Manhattan’s urban grid. Each of the work’s nine parts overlaps two ink drawings on translucent tracing paper. The interplay between the layers suggests mashrabiya lattice screens and barbed wire, means of arresting movement. Visitors are encouraged to walk across Dust Breeding (2015), Bulgarian-born, London-based Turkish artist Ergin ÇavuÅ?oÄ?lu’s anamorphic floor drawing that takes its title from Man Ray’s 1920 photograph of Duchamp’s Large Glass with Dust Motes ; a closed-circuit camera is trained upon a vantage point from which the drawing looks three-dimensional. But the monitor that relays these images is out of the sight line, several yards away. Both Hefuna and ÇavuÅ?oÄ?lu’s works suggest a Middle East that becomes both legible and mobile only when mediated from a considerable distance.

Especially stunning are the geometric shadows cast by Tunisian artist Nadia Kaabi-Linke’s stainless steel and rubber structure Flying Carpets (2011). The marriage of work and site feels like a homecoming. The installation is based on a Venetian bridge frequented by immigrant vendors where, at first sign of the authorities, merchants jellyroll their wares up into the carpets and disperse. It bespeaks the frustration of interrupted circulation familiar to anyone with a second-class passport, albeit with a pristine lightness that tempers any intimation of the European refugee crisis. More pointedly, the chilly blues of Saudi Arabian artist Ahmed Mater’s lightboxes in Disarm 1-10 (2013) highlight the rapid gentrification and militarization of Mecca, with aerial stills taken from helicopter surveillance of unsanctioned pilgrims.

Then there’s the heavy furniture of stasis, the kind produced when ideas coagulate and congeal into a kind of temporary fixity as archive or as architecture—not Goethe’s frozen music so much as ossified ideology. Take the matched shots and kaleidoscopic central seaming of Afghan artist Mariam Ghani’s dispassionately narrated two-channel video A Brief History of Collapses (2012), which joins a pair of unlikely architectural twins: the restored Museum Fridericianum in Kassel—Europe’s first public art museum—and the neoclassical ruin of a reformer king’s Dar-ul-Aman palace in Kabul.  His agenda of liberalization and liberation, as represented by the palace’s portico and colonnade, feels like a footnote, as similar attempts all too often do. In theory, that should make Kuwait-born Amman-based Palestinian artist Ala Younis’s Plan for Greater Baghdad (2015) more engaging. The title is taken from Guggenheim architect Frank Lloyd Wright’s own unrealized plan for a cultural hub on an island in the Tigris—something like a 1950s Saadiyat Island—and its printouts of 3-D renders and Google Maps hint at the possibility of an augmented archive. Yet Younis’s work, which unspools the half century leading up to the construction of Le Corbusier’s Saddam Hussein Gymnasium on two walls and in a real-estate trade-show model, is an archive as custom-built beige L-sectional. It fills its allotted spatial and conceptual square footage just a little too neatly. The sintered figures in the mockup of the gym suggest computer-game characters desperately semaphoring for the player’s attention—for rescue, perhaps—in contorted Dantean agony. In contrast, Mohammed Kazem’s beautifully spare paper sculpture Scratches on Paper (2014) turns a scroll into a rhythmically scissor-inscribed stave. Instead of dramatic watershed events, it notches the slow, almost imperceptible passage of time like grooves on a vinyl record.

Le Corbusier appears again in French-Algerian artist Kader Attia’s Untitled (Ghardaia), 2009, a scale model of a city built of couscous. Large portraits of Le Corbusier and fellow modernist Fernard Pouillon leer over the city from which they took the forms that would later appear in their designs; what we might term cultural appropriation now was very much par for course in French Algeria. Like the colonial project, the couscous edifices will crumble with time—a month in, cracks already show—but like the archive, the architects’ glassy grins will remain forever fixed.

Attia’s city sings a call and response with Iranian-Canadian artist Abbas Akhavan’s rather lovely Study for a Monument (2013-16), in which bronze casts of plants native to Iraq’s river systems gesture towards war’s environmental impact. Their enlargement suggests the grandeur of monumentality, even as their heavily oxidized finish denies them any such gloss. Neatly laid out on white sheets, the effect is surprisingly visceral, lurching between a forensic botanical lab and a funeral of charred flesh in the aftermath. Although the violence of ethnic and national identification is felt throughout the show, it is Akhavan’s twisted flora that invoke it most directly. Stripped of their geopolitical context, the works arrayed on white sheets—and on the white walls of the museum more broadly—seem to warn that identity withers in its documentation.