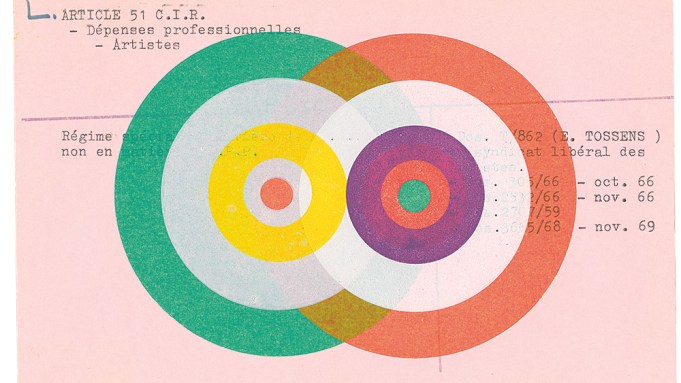 On a recent tour of one of Donald Judd’s many studios in Marfa, Texas, I noticed a set of twenty or so folders that would normally hang inside a filing cabinet. They were all clearly labeled, but instead of being confined to a metal box, they were spread horizontally on a bookshelf, so that every file was immediately accessible without sorting. Judd displayed all the objects he created and owned. He even framed and hung his sketches.

The artist’s method of organizing and arranging struck me as particularly relevant today. Though Judd wasn’t one to throw it all out, he was especially careful to avoid acquiring junk. Now The Life-Changing Magic of Tidying Up, Marie Kondo’s 2014 book on decluttering and organizing, is a bestseller, and James Altucher makes a career as a lifestyle guru talking about how he can live with fifteen things in his bag and sleep on couches. Austere advice on achieving simplicity by discarding personal effects has become a quickly growing self-help subgenre. But the luxury of choosing to live this way is out of reach for many of us. Karl Lagerfeld may claim that “the most important piece of furniture in a house is the garbage can,” but for most of us slobs, the things we keep help us make sense of our own complexities.

Karel Martens collects garbage. He has for almost fifty years. Martens finds and keeps small pieces of metal of particular shapes and heights—industrial byproducts with a specific, but unknown function—and uses them in monoprinting, a kind of printmaking that produces a unique original rather than multiples. Two pieces of Martens’s garbage became the conjoined shapes on the cover of the 2016 edition of A.i.A.’s Annual Guide. The shapes are vaguely typographic. They could be J’s, or L’s, or 7’s, but maybe they aren’t. On their own, they say very little. But when placed together, they begin to say a lot more.

Martens is a designer and teacher, though he prefers to call himself a typographer. For centuries after the advent of the printing press, typographers arranged texts to be printed by distributing metal pieces of type to achieve optimal legibility and aesthetic value. As it evolved over time, the profession split. Some typographers specialized in printing, while others focused on what is now known as graphic design. The latter term was not used to designate a field of study when Martens enrolled at the Arnhem Academy of Art and Industrial Arts in the late 1950s. But even as the profession of graphic design has expanded to include many different activities, the divisions of labor particular to the history of the printing press persist in the contemporary categorization of disciplines. By calling himself a typographer, and not a graphic designer, Martens signals that his primary concern is the organization of information, rather than the creation or clarification of meaning.

Martens restrains himself. He only utilizes one typeface, Monotype Grotesque, unless he has a very specific reason to use something else. As a typographer, he uses the letters and marks available to him in the typeface. As a printer, he uses the colors available to him in the studio. As a collector, he limits himself to the parts that fit on the press he uses to make monoprints. In 1994, Martens designed a set of phone cards for PTT Telecom in the Netherlands featuring overprinted numbers arranged in a grid. The numbers were a code Martens developed that encrypted the Dutch national anthem. Martens’s strikingly spare use of type to create a pattern that functions as a form of communication makes the cards unlike many of the abstract monoprints Martens produces on his own in his studio. Most of Karel’s monoprints use bits of metal to layer colorful shapes over found documents—collection cards from museums, discarded identity records, and product packaging. Without any functional relationship to the typography on these documents, the shapes push the text into abstraction. Sometimes, Karel inverts the relationship when he puts his monoprints in his commissioned work. Since 1990, Martens has led the design of OASE, the Dutch architecture journal, often with his students from the Werkplaats Typografie or his daughter Aagje. Many of the journal’s covers and feature articles are printed alongside, or on top of, Martens’s printed forms. In these instances, the prints become the background surface for his typography.

Photographs of Martens’s studio in Amsterdam show piles of books, bins, and boxes on shelves and tables, as well as walls covered in papers and metal parts. This is the kind of clutter that self-help gurus want us to get rid of. When I asked Martens how he arranges all his things, he explained that organizing everything is a bit too much for him. He thinks of it organically, and uses the term “alliteration” to describe what draws him to pair certain forms. If they were words, they might have similar sounds. If they were elements of typography, they might belong to the same type family. He stores the metal parts that he uses in his prints in bins, but they find their way to the table surface when Martens begins his process. At that point, the found parts occupy large areas of the studio, arranged according to shape or scale. Martens describes his working environment as chaotic and uncomfortable. But this way of organizing—or not organizing—is what inspires him. Out of the chaos, he can take certain elements and make them into something new.

A visit to another of Judd’s studios—this one in a Safeway grocery store in Marfa that the artist purchased after it fell into disuse—revealed rows of long worktables lining the length of the huge open space. On display were fabrication and material samples, swatches of metals and plastics, books of color swatches, and assorted tools. The obsessive-compulsive yard-sale layout suggested that every object had found its place. Conversely, Martens recognizes the disorder that confines him. Like a printer who has surrounded himself with cases of metal type, Martens has filled his studio with flattened machine parts that become bits of language in his idiosyncratic lexicon as they are organized. His small metal objects are arranged in a halfway state—garbage, and not particularly prized outside his studio. If Martens’s complexity comes from recognizing these fragmentary words in everything, then his task as a typographer is to organize these parts into sentences, into something that finally feels complete.