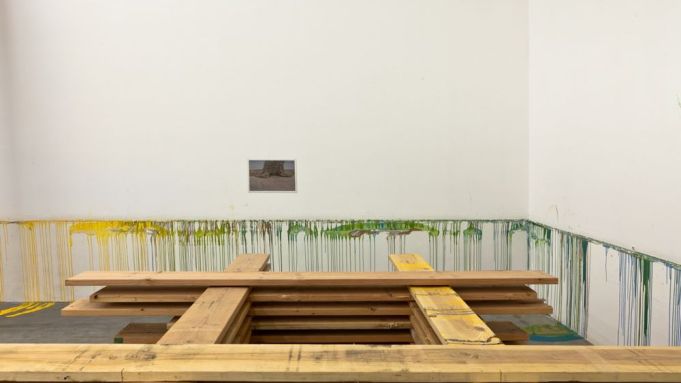 For Free World, the dominant piece in Hertling’s show, Tuazon and Hansen dug out the gallery’s floor and installed repurposed plywood in various configurations-some in neat, waist-high stacks of cubes, others in spread-out Jenga-like formations. “Heart to Hand” is rounded out with a moody inkjet print of a graffiti-covered picnic bench by Klara Lidén, a series of five C-prints by Zoe Leonard showing a tree growing into and around a metal fence, and Adam Pendleton’s silkscreened glass-and-mirror pieces.

A.i.A. spoke to the German-born Hertling, a lawyer by day and curator/event organizer by night, about the improbable overlap of her interests.

LEIGH ANNE MILLER What links the five artists you included in “Heart to Hand”?

PATI HERTLING I wanted to show work that I think has political content. Even if the artists themselves aren’t necessarily activist artists, they are still very concerned with politics. But I also wanted to demonstrate how interpretations can change over time, and how contemporary art is influenced by the political climate.

MILLER Were any of the artists resistant to being labeled “political”? Or were they open to your interpretation of their work?

HERTLING I wrote a text in the beginning that some of the artists had problems with. They were my personal opinions about the politicization of society, but also about the hypocritical gauche caviar attitude of our times. Naturally, I understood when the artists explained that their work wasn’t about that. I think some of them were reluctant to be in a show that was specifically about political art.

MILLER How did you resolve the situation?

HERTLING I changed the text, because I saw where they were coming from. Nonetheless, each of them is really concerned with resistance and process and trying to change things, especially Klara Lidén. I’m showing one really large print of hers, a photo of the benches typical of a German beer garden. It’s just picnic benches, stacked on top of one another and covered in scribbles. It shows people voicing their opinions in public space. The photo ends up looking like a kind of flag. Zoe’s work is about struggle, evolution and other big societal concepts.

MILLER In 2009, you organized “modern modern” at the Chelsea Art Museum, a show about artists living between Berlin and New York. How has your approach changed since then?

HERLING “Modern modern” was a really good experience, but I wanted to do something more precise this time. That show had 30 or so artists, and looking back, it felt a little over-crowded.

Another problem with “modern modern” was that the Chelsea Art Museum was not really functional. There was no assistant curatorial team or a production team at all. I did everything myself. There was no budget-like $2,000 for shipping. So it was . . . an experience. I really worked very closely with the artists; a lot of them brought their own work on the airplane with them. This time I’ve had much more support.

MILLER You also ran the performance series “Evas Arches und der Feminist,” first in Berlin and then New York, for several years. How did that wind down?

HERTLING It had been going on for a while, but I stopped doing it last February. Again, I wanted to do something more precise. Evas Arches had become more like a party; after many years, the timing felt right to end it.

MILLER I hear that you’re starting a new salon/project space, Bulletin. How is that going?

HERTLING It’s on the Lower East Side in an empty space I am currently occupying. I’m hoping to work out an arrangement with the guy who rents it.

Bulletin is going to be more of a salon. Not necessarily devoted to art, but more for conversations and talks about all kinds of topics. For our first event in mid-January, I showed a film by Ulrike Meinhof, a cofounder of the Red Army Faction, a left-wing terrorist group began Germany in 1970.

In March we mounted a performance by Ei Arakawa and his brother, Tomoo Arakawa (aka Brothers United), and Kerstin Bratsch and Adele Roder (aka Das Institute), for the anniversary of the Fukushima catastrophe. Tomoo owns several tanning salon in Japan, and occasionally they do these projects to raise some money and also to memorialize everybody who was affected by the earthquake and tsunami.

MILLER How often do you plan to organize Bulletin events?

HERTLING I’m trying for a weekly basis. Even if there’s not an official program I’d like to keep the space, because I feel that New York is kind of missing a place where you can just go and run into people in a relaxed way. I’m really against exclusivity. Of course when you do something within a community that you’re a part of, everything just comes together naturally—I ask a friend if they want to collaborate and then it just happens.

MILLER How does you day job, as a lawyer, influence these projects?

HERTLING I keep them pretty separate. In my law practice, my main concentration is art restitution. I do a lot of provenance research, combing through historical documents, especially from the ’30s, when the Nazis were coming to power. So I’ve read a lot about the creative community in Germany and France at that time. The research does inspire me-that’s one reason why I am always drawn to salon-style projects. It was a forced situation then, with artists having to hide out from the government. Now we live in a more free society and can do whatever we want, but I still hold on to the romantic idea of creating a community.