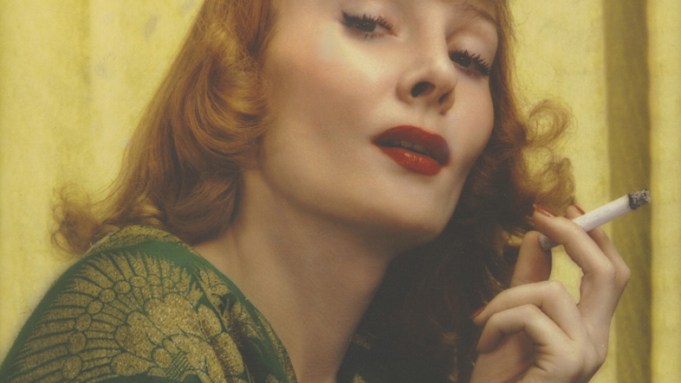 In the mid-1930s, legendary salesman Elmer Wheeler coined a catchy slogan—“Don’t sell the steak, sell the sizzle”—to promote what he believed to be advertising’s most effective strategy. Some years later, in an industry film now available on YouTube, he got even more specific. “The sizzle,” Wheeler explains in his rat-a-tat-tat pitchman’s delivery, “is the tang in the cheese, the crunch in the cracker, the whiff in the coffee.” As recent exhibitions at the J. Paul Getty Museum and the Los Angeles Public Library confirmed, Paul Outerbridge’s sumptuous and sometimes strange photographs of cheese, crackers, coffee and even more exotic subjects still generate the heat Wheeler was advocating.

A photograph, Outerbridge wrote, “should do something to its beholder; either give a more complete appreciation of beauty, or, if nothing else, even a good mental kick in the pants.”1 Following through on both counts, Outerbridge produced some of the 20th century’s more sublime and outrageous pictures. His exquisite modernist images from the 1920s were featured in glamorous magazines, including Vanity Fair and Vogue. Shifting gears, Outerbridge spent the next decade mastering color photography, producing vivid commercial pictures for corporate clients, as well as, for more rarefied audiences, unsettling nudes that edged toward Surrealism and still seem otherworldly today.

Changing taste shaped responses to Outerbridge’s work, during and after his lifetime. He was a darling of the avant-garde in the ’20s and the highest paid photographer in New York in the ’30s, but a telling 1951 self-portrait that shows Outerbridge in a folding chair, awaiting customers in front of a modest rented booth at a local art fair in Laguna Beach, suggests his changing fortunes. Marcel Duchamp was so taken with Outerbridge’s emblematically modern Ide Collar ad in the November 1922 issue of Vanity Fair that he tore the page out and pinned it up on his studio wall in Paris. Half a century later, in the 1973 book Looking at Photographs, John Szarkowski dismissed Outerbridge’s equally iconic color works as little more than “commercial illustrations.” What is it that makes this work beguiling for some and problematic for others—particularly for curators charged with distilling neat art historical narratives from complex and contradictory material?

One reason—perhaps it’s the reason—we remain fascinated with Outerbridge’s photographs is that he was both an artist and a salesman. Boldly and without apology, he explored photography’s exalted and base natures. The work veers from black-and-white to color, cerebral to carnal, a photographic equivalent of Freud’s Madonna/whore complex. Outerbridge made pictures for art and for commerce. Some are subtle, others shameless. Many were reproduced widely; more than a few were censored and some, including the work in the library’s exhibition, had never even previously been printed. Any single photograph is just as likely to pay homage to classical ideals as it is to celebrate the eclectic. The power and pull of Outerbridge’s ouevre, the reason it grabs and holds our attention, is that it swings both ways.

It’s easy to love Outerbridge’s early and elegant black-and-white works, and to understand why the best of them fetch such extraordinary prices at auction. (Marmon Crankshaft, from 1923, brought $374,400 at Sotheby’s in 2006, well over its high estimate of $150,000.) At New York’s Clarence H. White School of Photography, where he enrolled in 1921, Outerbridge studied with Max Weber, who encouraged students to experiment with lighting, framing and odd vantage points, and to invest their images with the syncopated visual rhythms and brisk look of modernity. Planned out and even carefully diagrammed, images like Top Hat and Mufflers (1924) and H-O Box (1922) combine luxury and everyday objects alike with jazzy riffs on light and shadow. Consumerist longing and erotic desire bounce around within the borders of Outerbridge’s small and velvety platinum prints like water molecules in a pot that’s reached a boil. The physical production of these prints was just as thoughtfully calculated to seduce. Even when platinum and palladium emulsion materials became scarce in the years after World War I, Outerbridge insisted on using them to craft prints whose tonal depth and warmth trump the more meager materiality of conventional processes.

Early in his career, Outerbridge traveled between New York, where he befriended Alfred Stieglitz and became Edward Steichen’s biggest rival, and Paris, where he mingled with Man Ray, Berenice Abbott, Duchamp, Picasso, Picabia, Eugene O’Neill and Josephine Baker. In 1927, he opened and ran, if only for a short time, the most costly and elaborately outfitted photographic studio ever built in Paris. “The men who produce advertising art,” business writer Earnest Elmo Calkins noted in 1928, were “the men represented in the art exhibitions.”2 Outerbridge shuttled back and forth between two worlds, participating in the historic “Film und Foto” exhibition in Stuttgart in 1929, exhibiting at the Julien Levy Gallery in New York in 1932 and billing record fees to clients in the depths of the Great Depression.

Changing times and diminished prosperity, however, triggered a shift in Outerbridge’s esthetic strategy. High-end glamour photography remained central to the marketing of movie stars in the 1930s, but became a much less effective method for selling tangible merchandise as the decade wore on. Sophisticated imagery like Outerbridge’s, which only recently had seemed so modern, began to look out of sync with the reduced circumstances of ordinary Americans’ lives. Understanding that “color appeals more to the senses than to the intellect,”3 Outerbridge shrewdly insured his marketability by making work that was more brightly hued and vibrant as the economy turned sour. In his custom-built, air-conditioned darkroom, he mastered the laborious process of making Carbro prints, whose idiosyncratic, saturated color palette didn’t replicate reality so much as pump it up. Throughout the 1930s, his riveting photographs of dining rooms, tabletop still lifes and displays of necessities like sandwiches and toilet paper—commissioned by clients that included House Beautiful, McCall’s and Scott Paper—attracted attention by offering up heightened visual experiences that bordered on the hyperreal.

The Coffee Drinkers (1940), a campy tableau staged for an A&P supermarket ad, presents a convivial moment: four men sharing a snack and cups of store-brand coffee, perhaps at the end of a long evening. But the studied camaraderie and metrosexual styling seem to suggest something else—that this kaffeeklatsch might just be the over-caffeinated prelude to an even longer night, once some neckties get loosened. Open-ended, sexualized narratives are closer to the surface and harder to ignore in the female nudes Outerbridge began shooting and printing obsessively in luxurious color. Difficult to make (each Carbro print took around nine hours to complete), the nudes proved equally challenging to publish and exhibit. In the 1930s, while the Hayes Code censored overt sexuality in Hollywood feature films, and Technicolor extravaganzas like The Wizard of Oz (1939) upped the ante on visual excitement, Outerbridge was masterminding his own reveries in photographs of women in high heels, garters, rubber swim caps, masks, top hats, kimonos and metal-clawed gloves. Hermetic, fetishized and heavily retouched, images like The Dutch Girl (1936), showing a partially nude young woman in a striking lace cap, are as artificial as they are exquisite, as voluptuous as they are ethereal. It was, and still is, hard not to stare.

Once Kodachrome and Kodacolor products became widely available in the 1940s, the market for pricey Carbro prints evaporated. Soon, the man whose color work stunned crowds when it premiered at the 1936 U.S. Camera Salon in New York, and who wrote the seminal “how-to” book, Photographing in Color, in 1940, found himself out of work. In 1943, Outerbridge moved to Hollywood, thinking there would be a job waiting for him at the Technicolor Motion Picture Corporation. When that didn’t pan out, he relocated to Laguna Beach and opened a small portrait studio. In the decade or so before his death in 1958, the master of color photography ran a small women’s sportswear company with his second wife, wrote articles for photo magazines and shot 35mm Kodachrome slides that today look like harbingers of the color photography that followed (William Eggleston’s, for example), but appeared only sporadically in local publications.Interest in Outerbridge revived in the 1970s after a Los Angeles photo dealer bought most of his extant prints, and the reproduction rights to them, from Outerbridge’s widow. The timing was right: a viable market for photography was percolating, and by mid-decade color photography—no longer a novelty, but an everyday reality for a new generation of baby-boomer photographers and artists—was finally beginning to attract attention, if not quite full acceptance, among the more conservative members of the art photography community. In America’s increasingly image-driven culture, and following Pop art’s appropriation of the vocabulary of mass media, the taint associated with color and commercial photography in the 1950s and ’60s began to fall away. You can see Outerbridge’s legacy in work as diverse as David Lynch’s lurid visuals in the film Blue Velvet, Thomas Demand’s meticulously fabricated tableaux and Loretta Lux’s sweetly hued but creepy portraits of children.

These days, with Outerbridge’s work scattered throughout private and museum collections around the world, exhibitions are rare. When they do occur, it’s a welcome opportunity to re-experience the work’s craftsmanship, audacity and impact. Seen in the midst of the 21st century’s first global economic crisis, these photographs from the worst boom-and-bust cycle of the last century still sizzle. The elegant early images and the more raucous color work that followed indicate how adept Outerbridge was at creating and reflecting desire. No wonder we can’t stop looking.