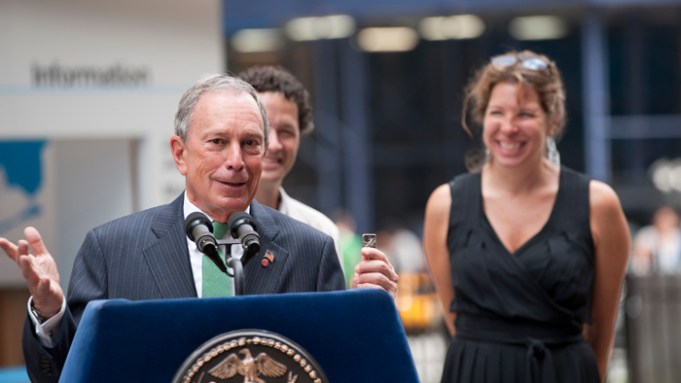 The first person to receive the key to New York City (Viscount Cornbury in 1702) has gone down in the history books as being a corrupt degenerate who took bribes and misappropriated government funds. Yankees Roger Clemens and Alex Rodriguez got keys to New York (in 2003 and 2007, respectively). Clemens is still under investigation for using performance-enhancing drugs, and A-Rod has admitted to using them in the past. Saddam Hussein was given the key to Detroit in 1980. All told, a spotty history.

Although it might not bode so well for recipients, last Thursday Mayor Bloomberg unveiled the latest Key to the City initiative at Times Square. Customarily symbolic, mixed media artist Paul Ramirez Jonas’ project with Creative Time, The Key to the City, replaces an ornamental key with a real one—or, rather, 25,000 of them. The keys open the locks to sites across the five boroughs, including a secret door on the fifth floor of The Brooklyn Museum, the switch for a lamp post light in Bryant Park, and a private room in a Jackson Heights’ restaurant. Anyone can acquire them from kiosks located in each borough (Manhattan’s is located at Times Square). A brief bestowal ceremony takes place, whereby participants sign a large ledger-in keeping with the original ritual—and every key is accompanied with an explanatory booklet.

Often addressing strategies of exploration in his work, Paul Ramirez Jonas’ first project involving keys began in 2005 when examining the definition of locked or unlocked space. Jonas approached a variety of individuals to reveal the doors behind certain keys on their keychain. Those willing then had the option to exchange them with one of Jonas’ keys (after duplicating them), all of which Jonas documented in photographs. One participant, Oscar, held an unassuming-looking key that opened the locks of various gates throughout California’s state parks, gates that essentially belonged to the public.

That public access to locked spaces might be activated is crucial in this latest project. Jonas explains that his initial process was to “create a list of all the types of spaces that make a city a public city, such as a church, a court house, police station or a hospital. I then tried to cover every area of the map with these different spaces.” However, when considering the polis, it is not just the physical locations in the city-scape but also the organization of people living side by side and Jonas pulls these elements together in his latest project by making it into a shared venture.

Although beneficiaries were originally given the keys to medieval walled cities, Jonas’ Key to the City aspires to start breaking down those fortresses. At a point where few city-dwellers feel they have the full freedom of the urban landscape, and the use of surveillance aims to provide less threatening spaces, the contemporary city has evolved into a segregated fortress.

Jonas’ civic honoring retains archetypal formalities but also goes beyond that by offering the opportunity to physically open up and explore different areas of New York to any member of the public. Addressing the nature of citizenship and public interactions, Jonas attempts to reconfigure the relationsip between the self and the city through urban action. As with any public art piece the question remains whether people are intrigued enough to explore outside of their comfort zones. However, if nothing else, the project unveils the unfulfilled potential of the original ritual.

Review: Say Hello to the Lomi, the Electric Composter That Keeps Selling Out