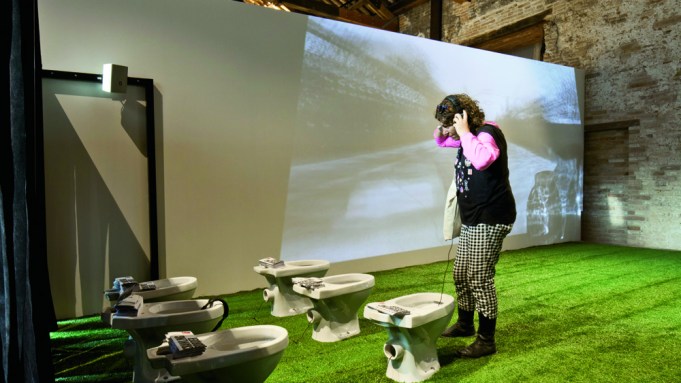 So much bad art is presented with pomp in Venice. The artists who show there are, for the most part, good. But something happens to their work as it passes through the sausage factory of state cultural bureaucracies, public-private partnerships and curatorial oversight to emerge into the architectural follies of the Giardini or manses of the toy city beyond it. The agendas, egos and PR tactics that hum in the background of any exhibition are so numerous and so uncoordinated in Venice that the cacophony overpowers all but the strongest artistic statements, sucking them into the noise of a Biennale that has too much of everything to be about anything.

The past, as usual, looks simpler. There used to be less art. The Biennale used to have a coherent mission. It was founded in 1895 to burnish a young united Italy’s image as a modern nation-state. Over the first decades of the 20th century, the Giardini gradually acquired national pavilions, following the trendy model of the world’s fair but designating a permanent site. World War I brought a relatively brief hiatus (1916-18). Later, after a six-year disruption due to World War II, the Biennale affirmed European peace by celebrating modernism. In 1948, at the postwar relaunch, a show of Impressionist masters filled the vacated German pavilion. Britain brought Turner, France featured Maillol and Austria showed Schiele—all artists who died before the war. The Central Pavilion hosted a Klee retrospective. A recovering Europe’s retreat from the latest in art indicated a rethinking of the Biennale’s purpose. Participation signaled an affiliation with a politically progressive project—or, in the case of the Soviet pavilion’s commitment to realism, an alternative notion of how that project’s art should look.

The general motivation for joining the Biennale is to feature artists on a global stage, thereby fostering cultural ferment at home through international exchange. Tuvalu, a tiny South Pacific nation endangered by rising sea levels, has a more transparent agenda: to raise awareness about global warming through art. This year, for their second entry, the organizers enlisted Taiwanese artist Vincent J.F. Huang to flood part of the Arsenale and build footbridges over the water, where viewers could ruminate on the threat to both Venice and Tuvalu.

In this atmosphere, any throwback to a transcendent project comes off as hopelessly hokey. That is certainly the case with Egypt, which has brought art promoting peace. Ahmed Abdel-Fatah, Maher Dawoud and Gamal El-Kheshen, winners of a competition sponsored by the Egyptian ministry of culture, looped narrow Astroturf paths in a three-dimensional rollercoaster formation inside the boxy pavilion shared by multiple nations at the Giardini’s far end. The greenery cushions Samsung tablets, the screens of which, depending on your movements and touch, might show spiders and roaches swarming digital grass, or butterflies and bunnies frolicking in flowers. The installation is called “Can You See?” I couldn’t, until I read in the pavilion’s brochure that the Astroturf’s curves spell “PEACE” in English—a word that in Arabic is a synonym for “paradise,” with etymological links to planting and gardening. The work presents peace, not chaos, as the natural state of things, and the digital pests are here to warn humans to tread carefully so as not to disturb it. The trite message adheres to the program articulated by Egypt’s current minister of culture, which aims to “combat extremism through spreading a culture of peace, tolerance and coexistence.” “Can You See?” was selected before the current minister—the seventh since Egypt’s 2011 revolution—took office this spring, but harmless wordplay and flashy gadgetry smack of a safe choice for a bureaucracy aiming to promote quiescence.

Japan’s pavilion has a defter touch with platitude. Chiharu Shiota, a Berlin-based artist who tends to address existential yearning with room-filling installations, has woven a cavern of red yarn. The hanging threads with keys in their tangles cling to wooden longboats and hold their prows off the ground. The components of The Key in the Hand (2015) call to mind wishing trees in Asia, with colorful ribbons wrapped around branches or twigs, or the Pont des Arts bridge in Paris, which was smothered in padlocks until they were hacked off in June. In short, the pavilion looks like a sweet and sentimental tourist trap. If it’s not obvious enough here that the keys are meant to unlock memories and the patina on them suggests the passage of time, there are monitors in the rear showing videos of children defining memory.

The most successful pavilions tackle nationalism head-on while suggesting a way around it. Armenia won
the Golden Lion with a group show about diaspora. (It is the third time a pavilion outside the Giardini has taken the main prize, after Luxembourg in 2003 and debutante Angola in 2013—another herald of the Biennale’s decentralization.) Coinciding with the centenary of the Armenian genocide, “Armenity” brings together works by 16 individual artists and teams—including Egypt-born Anna Boghiguian’s charmingly smeary painted books and New York-based Nina Katchadourian’s documentation of her attempts to learn Armenian accents—on the island of San Lazzaro degli Armeni. The 18th-century monastery there, long a center of Armenian culture for those who fled persecution in the Ottoman Empire, still displays vintage printing equipment as well as a collection of manuscripts and books in Armenian.

Germany also addresses a transnational condition from multiple perspectives. Jasmina Metwaly and Philip Rizk’s film Out on the Street (2015), with lighting suggestive of streetlamps and police station lobbies, has factory workers in Cairo reenacting scenes of their arrest and humiliation, while Hito Steyerl’s video Factory of the Sun (2015) forecasts a near post-national future where Deutsche Bank orders hits on hackers who threaten its network.

For the Belgian pavilion, Vincent Meessen has organized a group show of 10 artists, including several from parts of Africa once colonized by Belgium. The works reflect on industrial zones, housing complexes and public transit, as well as black artists’ involvement in the Dada, CoBrA and Situationist movements—all outcomes of the social and intellectual collisions of colonialism.

The boldest gesture of all was by Swiss artist Christoph Büchel. Under the aegis of the Icelandic pavilion, he established a temporary mosque in a disused church, creating a physical center for an immigrant community where there had been none. But city authorities soon shut the mosque down as an indifferent Biennale administration looked the other way.

If Georgia lacks focus, the Canada pavilion has honed it too finely. The BGL collective (whose name is an acronym formed from the members’ surnames) celebrates the everyday life of a Québécois tinkerer with replicas of a seedy convenience store and a messy garage studio stacked with drippy paint cans. The impressions garnered while passing through these facsimile environments are just as disposable as the junk they comprise—glimpses of local kitsch.

Belarus, to my surprise, sharply intervened in the festival-art texture. It had some prime real estate on Riva San Biagio, along the waterfront between the Arsenale and the Giardini, but the narrow storefront, tucked behind a bridge’s stairway, could easily be overlooked. Once inside, I might have left after a quick glance at the plain assortment of desks and office supplies if the attendants hadn’t engaged me in conversation. They asked me to page through five binders of photographs taken between 1914 and 1918, when German and Russian armies fought over the territory that is now Belarus. Would I please select an image that spoke to me and write a page-long response to it? In the photos, soldiers pose sternly in their coarse felt uniforms; occasionally, I’d come across a grisly shot of an injury, a portrait of a soldier with half his face gone, or heaps of civilian corpses.

These photographs, copied from museum archives, tell a story about turbulent Central European borders in the 20th century, about the interplay of personal history and patriotic legend in the shaping of nationhood. Yet the project went beyond the show-and-tell of cultural identity encountered in pavilions as different as Germany’s and Canada’s. Requesting my participation, it prompted me to reflect on my own origins and their connection to foreign experience. No living American remembers war on home soil, and, personally, I haven’t known war beyond distant relatives dying in far-off lands, or images on screens; but I was nevertheless expected to have a meaningful response to the Belarusian archive.

The Belarus project felt like a solution to the pavilion problem, and the achievement was all the more impressive because it came without the support of a sophisticated state cultural apparatus, like Belgium’s and Germany’s, or an international network of funders, like Armenia’s. But it wasn’t a scalable solution: it depended on its own smallness. That is what made it all the more memorable in a Biennale that continues to be too big to fail, and will remain so until it does—until another global shift, perhaps the climatic one forecast by the Tuvalu pavilion, changes what the Biennale is about.

Interiors Maven Brigette Romanek on Photography, Her Favorite Cars and the Watch She Rarely Wears