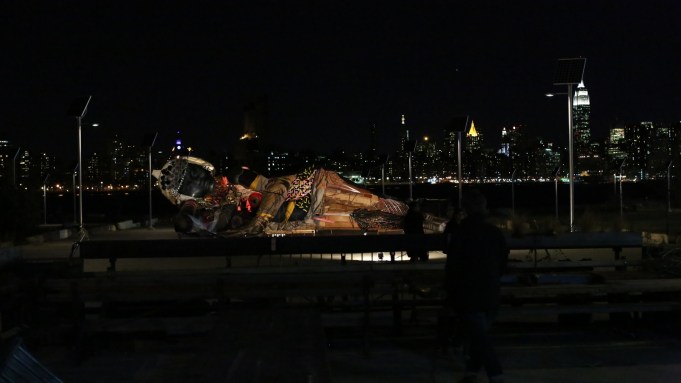 A quirky event Tuesday night honored a New York advocate of the homeless with a sprawling sculpture, feast and ceremony. Intoning the word “mother” repeatedly, laying down honorary textiles and bestowing flowers on members of a shivering crowd, Queen Mother Dr. Delois Blakely of Harlem blessed a 50-foot-long, scrap-steel and mixed-medium statue of a reclining figure created by the Polish sculptor Pawel Althamer and collaborators. This was the highlight of a three-week-long participatory project conducted at Biba, a trendy bar on the Kent Avenue waterfront in Brooklyn’s Williamsburg neighborhood.

A brainchild of the protean Polish social sculptor, in conjunction with his sons Szymon (a chef) and Bruno (an artist), and New York-based artists Noah Fischer, Roman Stanczak, Rafael Zwirek and the Aaron Burr Society, the project unfolded along the Williamsburg waterfront, in the shadow of high-rise developments that are emblematic of the gentrification of that edge of Brooklyn. Althamer has long admired Blakely, popularly acclaimed the “Community Mayor of Harlem and Goodwill Ambassador to Africa.”

“This is my first visit here,” the Queen Mother informed me. Diminutive and cheery, dressed in an orange turban and African-inspired garb, she seemed on first appearance an unlikely muse for the exotic female colossus (or reclining Buddha, as some in the crowd contended) that she was summoned to bless. Althamer wandered among the crowd, smiling and shaking people’s hands. After the ceremony, a small crowd of around 100 people retired to Biba to partake of a generous supper—”Polish fusion,” remarked a Performa press rep— devised by Szymon Althamer, a Warsaw chef. Among the decorations inside was a smaller version of the sculpture, a maquette that had been paraded to the site shortly after Halloween, as attested by a video on the Performa website. The waterfront sculpture was dismantled Thursday night.

Queen Mother of Reality is a joyful pastiche, backlit by the Manhattan skyline. Among other ingredients: a cluster of gray felt hats, a blown-up photo of the Queen Mother’s face at a younger age, spray-painted and taped blankets, headlights, hubcaps and other urban detritus. These are arranged rather elegantly over an open-work body that one could enter through a small door in the belly, finding in its “womb” (another word the Queen Mother intoned) numerous politically inspired drawings and slogans on paper that had been produced by collaborators and visitors during the previous weeks. The work was typical of Althamer, whose cohort of silver cyborgs, their faces bearing the likenesses of present-day Venetians, impressed visitors to “The Encyclopedic Palace” at this year’s Venice Biennale. The Brooklyn sculpture, by contrast, felt more optimistic, conceived as a symbolic protector of displaced women.

The event definitely leaned toward the random and participatory end of performance. But it’s difficult to be too snarky about a project inspired by something of a saint. The Queen Mother, an ex-Roman Catholic nun on whom “Sister Act” was reportedly based, has been walking Harlem’s 125th Street for decades, visiting women and youths, and protesting the violence of an increasingly polarized economy. She became a hero of the Occupy movement.

Here, however, she relaxed, feasting at a table with old friends, women likewise dressed in African attire. “Ask Hillary Clinton about me,” she said. “She knows what I do. Ask Bill!” She paused, before adding enigmatically, “But don’t ask them together.”